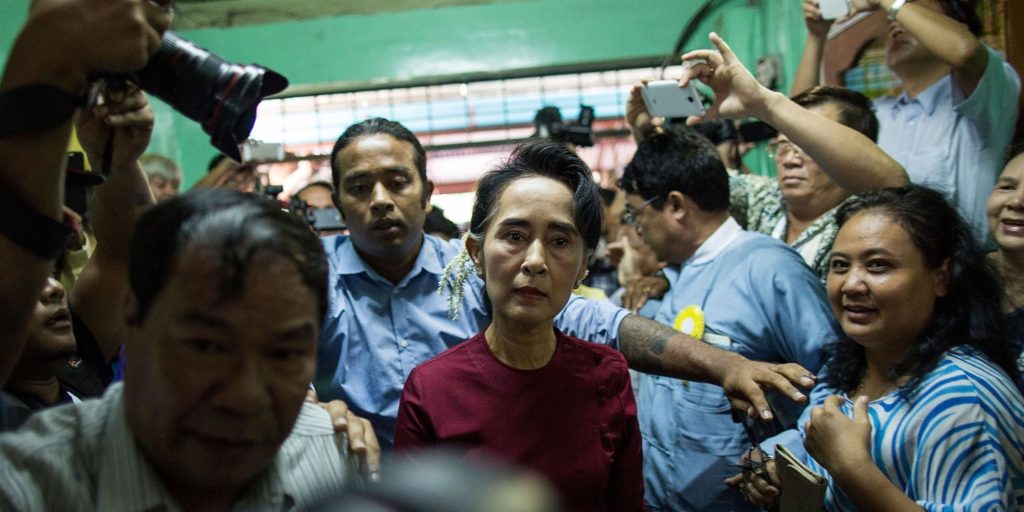 13 Apr 2017 – Aung San Suu Kyi is one of the most celebrated human rights icons of our age: Nobel Peace Laureate, winner of the Sakharov Prize, recipient of the Presidential Medal of Freedom, an Amnesty International-recognized prisoner of conscience for 15 long years.

These days, however, she is also an apologist for genocide, ethnic cleansing and mass rape.

For the past year, Aung San Suu Kyi has been State Counselor, or de facto head of government, in Myanmar, where members of the Rohingya Muslim minority in the northern Rakhine state have been shot, stabbed, starved, robbed, raped and driven from their homes in the hundreds of thousands. In December, while the world focused on the fall of Aleppo, more than a dozen Nobel Laureates published an open letter warning of a tragedy in Rakhine “amounting to ethnic cleansing and crimes against humanity.”

In February, a report by the United Nations documented how the Burmese army’s attacks on the Rohingya were “widespread as well as systematic” thus “indicating the very likely commission of crimes against humanity.” More than half of the 101 Rohingya women interviewed by UN investigators across the border in Bangladesh said they had suffered rape or other forms of sexual violence at the hands of security forces. “They beat and killed my husband with a knife,” one survivor recalled. “Five of them took off my clothes and raped me. My eight-month old son was crying of hunger when they were in my house because he wanted to breastfeed, so to silence him they killed him too with a knife.”

And the response of Aung San Suu Kyi? This once-proud campaigner against wartime rape and human rights abuses by the Burmese military has opted to borrow from the Donald Trump playbook of denial and deflection. Her office accused Rohingya women of fabricating stories of sexual violence and put the words “fake rape” — in the form of a banner headline, no less — on its official website. A spokesperson for the Foreign Ministry — also controlled directly by Aung San Suu Kyi — dismissed “made-up stories, blown out of proportion.” In February, the State Counselor herself reportedly told the Archbishop of Yangon, Charles Bo, that the international community is exaggerating the Rohingya issue.

This is Trumpism 101: Deny. Discredit. Smear. 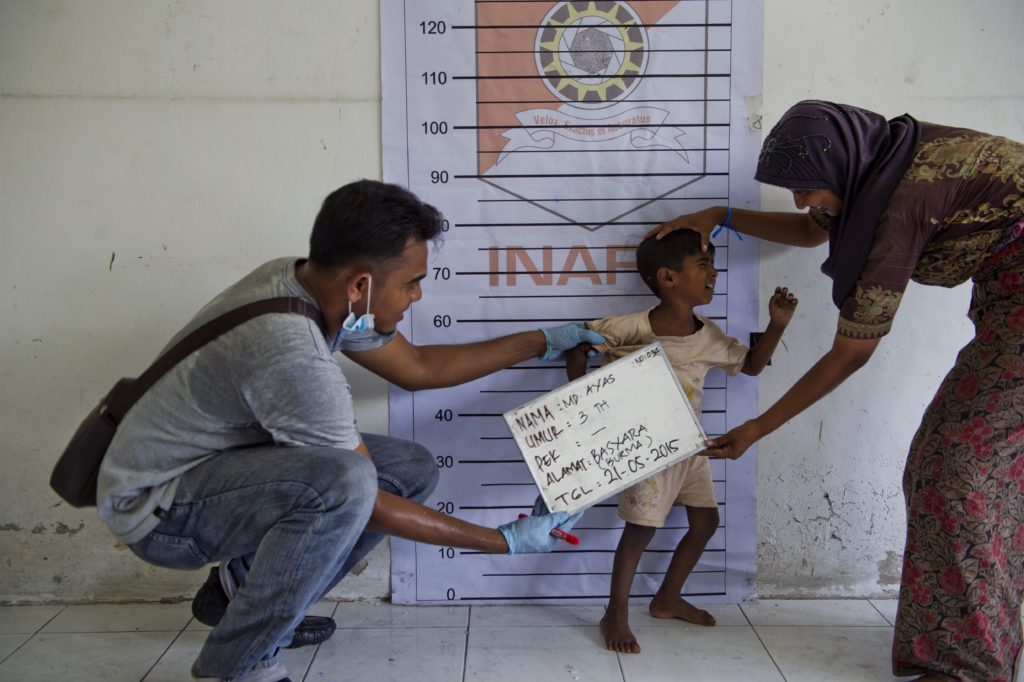 A Rohingya boy from Myanmar is photographed during police identification procedures at a newly set up confinement area in Bayeun, Aceh province on May 21, 2015, after more than 400 Rohingya migrants from Myanmar and Bangladesh were rescued by Indonesian fishermen off the waters of the province.
Photo: Romeo Gacad/AFP/Getty Images

It was all supposed to be so different. In November 2015, Myanmar held its first contested national elections after five decades of military rule. An overwhelming victory for Aung San Suu Kyi, leader of the opposition National League for Democracy (NLD) and former political prisoner, was going to usher in a new era of democracy, human rights and respect for minorities. That, at least, was the hope.

The reality has been very different. Less than a year after taking office, Burmese security forces launched a brutal crackdown on the Rohingya after an attack on a border outpost in Rakhine killed nine police officers in October. The northern portion of the state was sealed off by the military and humanitarian aid was blocked, as was access to foreign journalists and human rights groups. Hundreds of Rohingya Muslims are believed to have been slaughtered and tens of thousands driven across the border into Bangladesh.

This is only the latest chapter in the anti-Rohingya saga. The Muslim residents of Rakhine have been subjected to violent attacks by the military since 2012 and were stripped of citizenship, and rendered stateless, as long ago as 1982. The 1-million odd Rohingya Muslims live in apartheid-like conditions: denied access to employment, education and healthcare, forced to obtain permission to marry and subjected to a discriminatory “two-child” policy. “About 10 percent are held in internment camps,” according to Patrick Winn, Asia correspondent for Public Radio International. “The rest are quarantined in militarized districts and forbidden to travel.”

The standard Western media narrative is to accuse The Lady, as she is known by her admirers, of silence and of a grotesque failure to speak out against these human rights abuses. In an editorial last May, the New York Times denounced Suu Kyi’s “cowardly stance on the Rohingya.”

Yet hers is not merely a crime of omission, a refusal to denounce or condemn. Hers are much worse crimes of commission. She took a deliberate decision to try and discredit the Rohingya victims of rape. She went out of her way to accuse human rights groups and foreign journalists of exaggerations and fabrications. She demanded that the U.S. government stop using the name “Rohingya” — thereby perpetuating the pernicious myth that the Muslims of Rakhine are “Bengali” interlopers (rather than a Burmese community with a centuries-long presence inside Myanmar.) She also appointed a former army general to investigate the recent attacks on the Rohingya and he produced a report in January that, not surprisingly, whitewashed the well-documented crimes of his former colleagues in the Burmese military.

Silence, therefore, is the least of her sins. Silence also suggests a studied neutrality. Yet there is nothing neutral about Aung San Suu Kyi’s stance. She has picked her side and it is the side of Buddhist nationalism and crude Islamophobia.

In 2013, after an interview with the BBC’s Mishal Husain, Aung San Suu Kyi complained, “No one told me I was going to be interviewed by a Muslim.” In 2015, ahead of historic parliamentary elections, the NLD leader purged her party of all Muslim candidates, resulting in the country’s first legislature without any Muslim representation whatsoever. Like a Burmese Steve Bannon, she paranoiacally speaks of “global Muslim power” being “very great” — only 4 percent of the Burmese population, incidentally, is Muslim — while conspiratorially dismissing reports of Buddhist-orchestrated massacres in Rakhine as “Muslims killing Muslims.”

This is a form of genocide denial, delivered in a soft tone and posh voice by a telegenic Nobel Peace Prize winner. Genocide, though, sounds like an exaggeration, doesn’t it? Pro-Rohingya propaganda, perhaps? Yet independent study after independent study has come to the same stark and depressing conclusion: genocide is being carried out against the Rohingya. For example, an October 2015 legal analysis by the Allard K. Lowenstein International Human Rights Clinic at Yale Law School, found “strong evidence… that genocidal acts have been committed against Rohingya” and “that such acts have been committed with the intent to destroy the Rohingya, in whole or in part.” 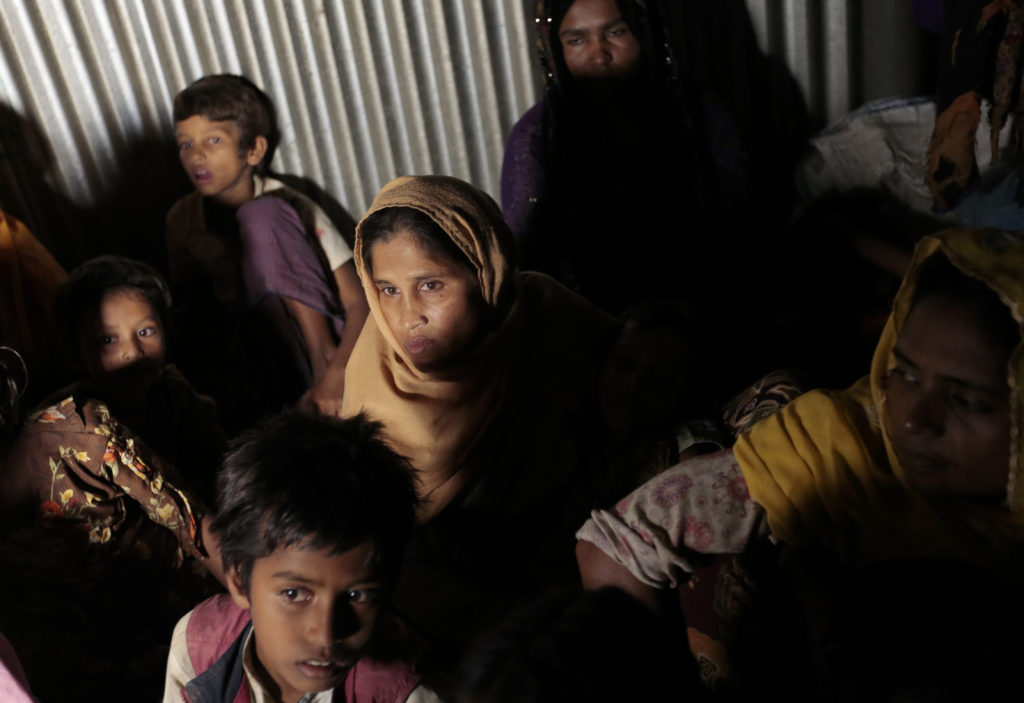 Rohingya from Myanmar who recently crossed over to Bangladesh huddle in a room at an unregistered refugee camp in Teknaf, near Cox’s Bazar, south of Dhaka, Bangladesh on Dec. 2, 2016.
Photo: A.M. Ahad/AP

Another report published in the same month, by the International State Crime Initiative at Queen Mary University of London, concluded that “the Rohingya face the final stages of genocide” and noted how “state-sponsored stigmatisation, discrimination, violence and segregation … make precarious the very existence of the Rohingya.”

The State Counselor, from this perspective, is not simply standing by as genocide occurs; she is legitimizing, encouraging and enabling it. When a legendary champion of human rights is in charge of a government that undertakes military operations against “terrorists,” smearing and discrediting the victims of gang rape and loudly denying the burning down of villages and forced expulsion of families, it makes it much harder for the international community to highlight those crimes, let alone intervene to halt them. In recent years, in fact, Western governments have been rolling back political and economic sanctions on Myanmar, citing the country’s “progress“on democracy and pointing to the election victory of Aung San Suu Kyi and her NLD.

Politicians and pundits in the West, observes Zarni, long ago adopted Aung San Suu Kyi as “their liberal darling — petite, attractive, Oxford-educated ‘Oriental’ woman with the most prestigious pedigree, married to a white man, an Oxford don, connected with the British Establishment.” Belatedly, the West’s journalists, diplomats and human rights groups “are waking up to the ugly realities that she is neither principled nor liberal,” he adds.

It may be too little and too late, however. Around 1,000 Rohinga are believed to have been killed since October and more than 70,000 have been forced to flee the country. Yet Aung San Suu Kyi continues to shamelessly tell interviewers, such as the BBC’s Fergal Keane last week, that there is no ethnic cleansing going on and that the Burmese military are “not free to rape, pillage and torture” in Rakhine. Is this the behavior of a Mandela… or a Mugabe?

“Saints should always be judged guilty,” wrote George Orwell, in his famous 1949 essay on Mahatma Gandhi, “until they are proved innocent.” There is no evidence of innocence when it comes to Aung San Suu Kyi and her treatment of the Rohingya — only complicity and collusion in unspeakable crimes. This supposed saint is now an open sinner. The former political prisoner and democracy activist has turned into a genocide-denying, rape-excusing, Muslim-bashing Buddhist nationalist. Forget the house arrest and the Nobel Prize. This is how history will remember The Lady of Myanmar.

You Shouldn’t Blame Islam for Terrorism. Religion Isn’t a Crucial Factor in Attacks.