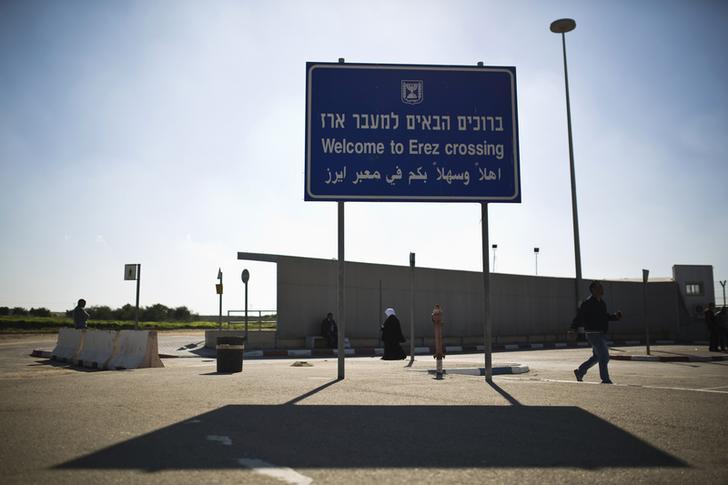 Front cover of HRW report showing the only way in and out of Gaza – if the military authorities allow you a permit.

(Jerusalem) – The Israeli military authorities are blocking access to and from the Gaza Strip for human rights workers who document abuses and advocate to end them, Human Rights Watch said in a report released today. The travel restrictions call into question the Israeli military authorities’ claim to rely on human rights organizations as an important source of information for their criminal investigations into potential serious crimes committed during the 2014 Gaza war.

The 47-page report, “Unwilling or Unable: Israeli Restrictions on Travel to and from Gaza for Human Rights Workers,” documents how Israel systematically bars human rights workers from travelling into and out of Gaza, even where the Israeli security services make no security claims against them as individuals. Egypt is also imposing severe travel restrictions on its border with Gaza. The International Criminal Court (ICC) prosecutor’s office should take note of the restrictions in the context of its ongoing preliminary examination of the Palestine situation.

“If Israel wants the ICC prosecutor to take seriously its argument that its criminal investigations are adequate, a good first step would be to allow human rights researchers to bring relevant information to light,” said Sari Bashi, Israel and Palestine advocacy director at Human Rights Watch. “Impeding the work of human rights groups raises questions not just about the willingness of Israel’s military authorities to conduct genuine investigations, but also their ability to do so.”

For the last two decades and especially since 2007, Israel has kept the Gaza Strip mostly closed, preventing Palestinians from leaving Gaza to pursue educational and professional opportunities, family visits and reunification, and medical care, save on an exceptional basis. The restrictions imposed by Egypt on its border with Gaza have significantly contributed to this de facto closure.

On March 26, 2017, the Hamas authorities in Gaza began significantly tightening restrictions on passage between Gaza and Israel, following the assassination of a senior militant that Hamas blames on Israel. Hamas says it wants to stop the killers from fleeing Gaza. The Hamas authorities are blocking nearly all travel out of Gaza, unless it is for medical care or to visit relatives in Israeli prisons. Males between the ages of 15 and 45 are being blocked from travelling altogether. These harsh and disproportionate restrictions are preventing young men from reaching badly needed medical care, and family visits to critically ill relatives or for funerals are among the kinds of travel blocked entirely.

The ICC prosecutor’s ongoing preliminary examination of the Palestine situation includes analyzing whether crimes falling under ICC jurisdiction have been committed, whether those crimes are sufficiently grave to merit the court’s attention, and whether national authorities are genuinely carrying out credible investigations and, if appropriate, weighing prosecutions in cases being considered for investigation by the ICC. The Israeli authorities claim that their investigations meet international standards, and that, although Israeli criminal investigators do not enter Gaza, they rely on human rights organizations to alert them of potential violations, provide documentary and forensic evidence, and facilitate witness testimony.

Palestinian authorities are not known to have investigated any alleged serious crimes committed in or from Gaza, such as the firing of rockets by militant groups in Gaza toward Israeli civilian areas. 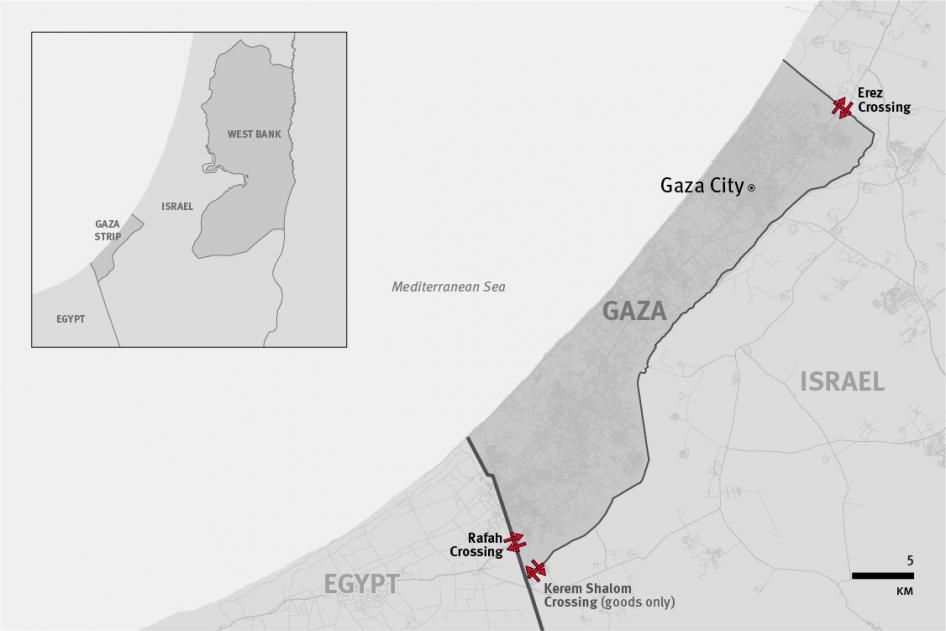 Map from HRW showing there is now only one ‘open’ crossing – Erez – into and out of the Gaza Strip. The Rafah crossing into Egypt is usually closed.

Israel controls Gaza access, with the exception of the Egyptian border, and controls all crossings between Gaza and the West Bank. The Israeli authorities do not allow Palestinians in Gaza to re-open their airport or build a seaport, rendering Palestinians dependent on foreign ports for travel abroad. The Egyptian authorities have kept their border with Gaza mostly closed since 2013. In 2016, the scope of travel via Gaza’s border with Israel was less than 3 percent of the scope recorded in September 2000.

The restrictions on both leaving Gaza and receiving visits by colleagues and experts from elsewhere hinder the potential of Palestinian human rights workers to carry out their work, coordinate with colleagues, and conduct advocacy. For example, during the 2014 war, neither Israel nor Egypt allowed an external weapons expert to enter Gaza, leaving Palestinian human rights groups to rely on a weapons expert from the Gaza authorities’ police force to analyze forensic evidence from the fighting.

The Hamas authorities in Gaza do not adequately protect human rights workers from retribution and in some cases arrest and harass those who criticize Hamas or the activities of armed groups in Gaza. The inability to get foreign human rights workers into and out of Gaza, therefore, also limits the ability of human rights groups to document Palestinian abuses inside Gaza, because of safety concerns for local staff.

In its response to Human Rights Watch, the Israeli military attorney general’s office (MAG) stated that it attributes “great importance” to its “extensive and daily dialogue” with human rights organizations, whose reporting, it said, provides important input into its decisions about whether to open a criminal investigation or how to obtain a fuller picture in existing investigations. However, the MAG also criticized documentation by human rights organizations as suffering from “methodological, factual and legal flaws” and, in some cases, “a clear bias.” The MAG called the travel restrictions on human rights workers “unavoidable … due to weighty security and political considerations.”

The MAG did not address why human rights workers should not be added to the category of people who, despite the security situation, are permitted to travel between Gaza, Israel, and the West Bank, which includes football players, senior merchants, employees of humanitarian aid organizations, and VIPs.

The Israeli authorities should end the generalized travel ban and allow access to and from Gaza for all Palestinians, subject only to individual security screening and physical inspection, Human Rights Watch said. Until the travel ban is canceled, the authorities should add human rights workers to those eligible for travel permits.

“Israel, Hamas and Egypt should change their policies to protect the vital work of human rights groups seeking to protect Palestinians and Israelis from abuses by the authorities and armed groups,” Bashi said.