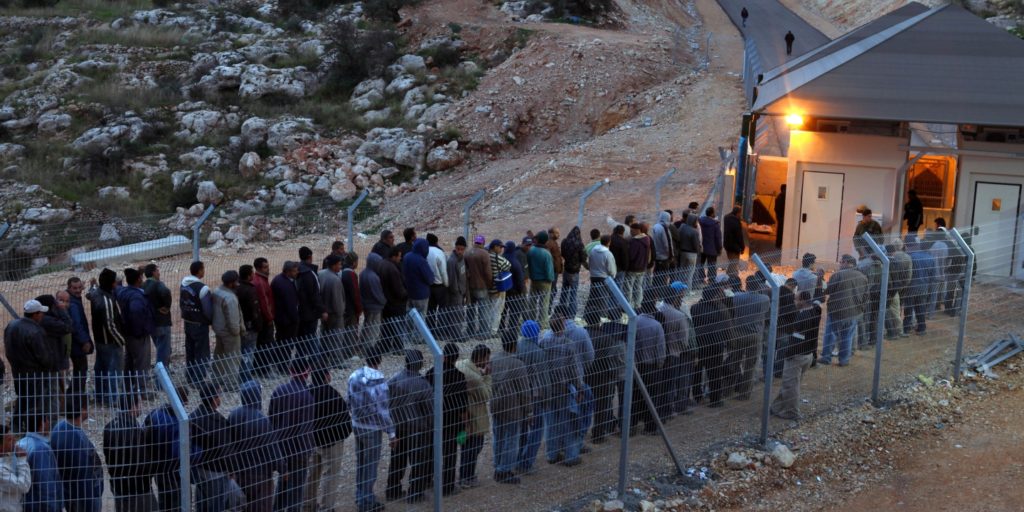 Palestinian labourers wait to get through an Israeli checkpoint as they return to their homes after a day’s work in Israel near the village of Ni’lin in the West Bank. Photo, 2010, by David Silverman, Getty.

Top Israelis have warned of apartheid so why the outrage at a UN report?

In this memoir the Israeli journalist Hirsh Goodman described how he returned home from the Six Day War in June 1967 to hear the country’s founding father and first prime minister, David Ben Gurion, speak on the radio. “Israel, he said, better rid itself of the territories and their Arab population as soon as possible,” recalled Goodman. “If it did not Israel would soon become an apartheid state.”

Goodman was born and raised in apartheid-era South Africa. “That phrase, ‘Israel will become an apartheid state,’ resonated with me,” Goodman wrote. “In a flash I understood what he was saying.”

In a flash. Yet fifty years later, despite an entrenched and ongoing occupation, Israel’s defenders angrily reject any invocation of the A-word. Leading U.S. politicians who have dared utter it in relation to Israel, such as John Kerry and Jimmy Carter, have been forced to apologize and backtrack. Last week, the United Nations Economic and Social Commission for Western Asia (UNESCWA) became the first U.N. agency to publish an official report documenting how “Israel has established an apartheid regime that dominates the Palestinian people as a whole,” and this provoked — as my colleague Glenn Greenwald has noted — a huge furor which led to the U.N. secretariat removing the report from its website and the Jordanian head of the UNESCWA, Rima Khalef, quitting in protest.

Good riddance, say supporters of the Jewish state. To mention the grotesque crime of apartheid in the same sentence as the democratic state of Israel, they claim, is “slander”, a “smear”, a “despicable” and “blatant lie”, a shameful act of “Israel-bashing” and a “new form of antisemitism.”

So what, I wonder, does that make Ben Gurion? Dishonest or despicable? How about Yitzhak Rabin, who told a TV journalist in 1976 during the first of his two terms as Israel’s prime minister, “I don’t think it’s possible to contain over the long term, if we don’t want to get to apartheid, a million and a half [more] Arabs inside a Jewish state”? Was he also engaged in a smear campaign against the nation he led?

In recent years, two more former Israeli premiers, Ehud Olmert and Ehud Barak, have echoed their illustrious predecessors’ warnings. Olmert has predicted that “if the two-state solution collapses, and we face a South African-style struggle for equal voting rights, then the State of Israel is finished” while Barak has declared that “if this bloc of millions of Palestinians cannot vote, that will be an apartheid state.”

Are they Israel bashers, too? 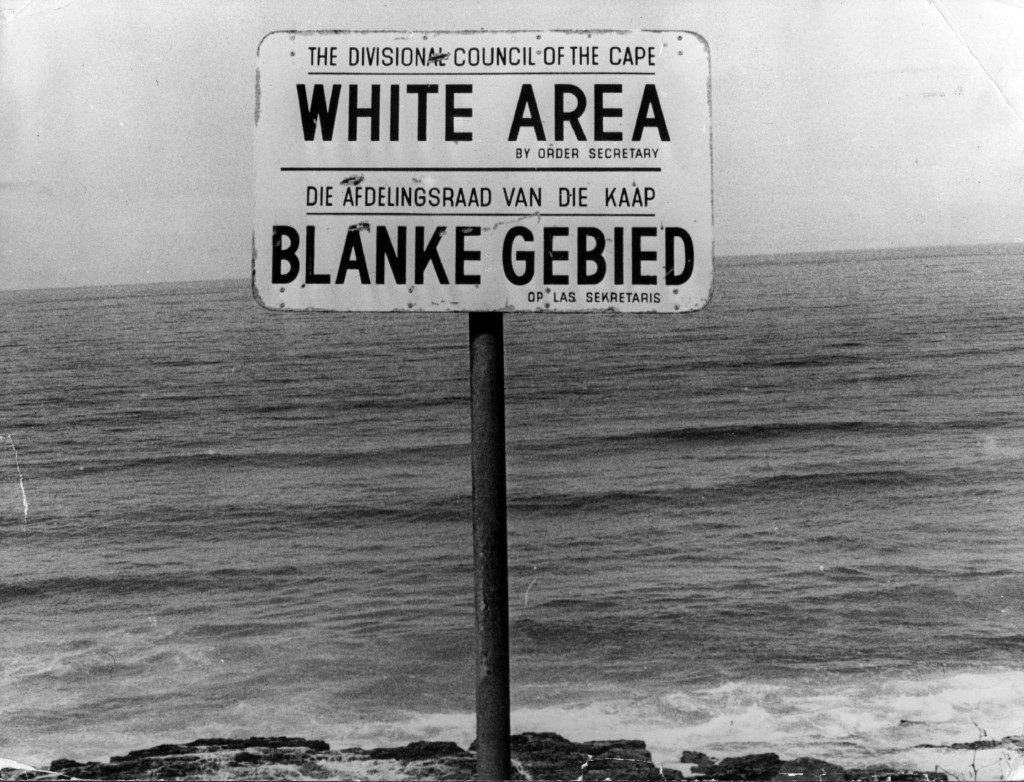 An apartheid notice on a beach near Capetown, denoting the area for whites only. Photo by Keystone/Getty Images

Meanwhile, several high-profile Israelis have suggested that apartheid is not a future risk but a present reality, including former education minister Shulamit Aloni (“Israel practises its own, quite violent, form of apartheid with the native Palestinian population”), former environment minister Yossi Sarid (“what acts like apartheid, is run like apartheid and harasses like apartheid, is not a duck — it is apartheid”) and former attorney general Michael Ben-Yair (“we established an apartheid regime in the occupied territories”).

Others have gone even further, recognizing that Israel is in complete control between the Jordan River and the Mediterranean Sea, and extending the apartheid analogy from the occupied West Bank and Gaza to inside the Green Line, to what’s considered Israel proper. Former Foreign Ministry chief Alon Liel, who also served as ambassador to South Africa, has said that “until a Palestinian state is created, we are actually one state. This joint state…is an apartheid state.”

Are we expected to dismiss all of these former Israeli officials as Israel-haters?

And what shall we do with the testimonies of prominent South Africans who defeated apartheid at home — only to be horrified by what they then witnessed in the occupied territories? “I’ve been very deeply distressed in my visit to the Holy Land,” wrote the Nobel Peace Price-winning bishop Desmond Tutu in 2002. “It reminded me so much of what happened to us black people in South Africa.” A range of senior officials from the African National Congress have backed Tutu’s comparison, including former South African president Kgalema Motlanthe (“the current situation… is worse than conditions were for blacks under the apartheid regime”), current speaker of the South African parliament Baleka Mbete (“far worse than apartheid”) and former South African intelligence minister Ronnie Kasrils (“the Israeli measures, the brutality, make apartheid look like a picnic”).

Are we expected to believe that all of these veterans of the South African anti-apartheid struggle have lost their minds? Are we supposed to denounce them as antisemites? 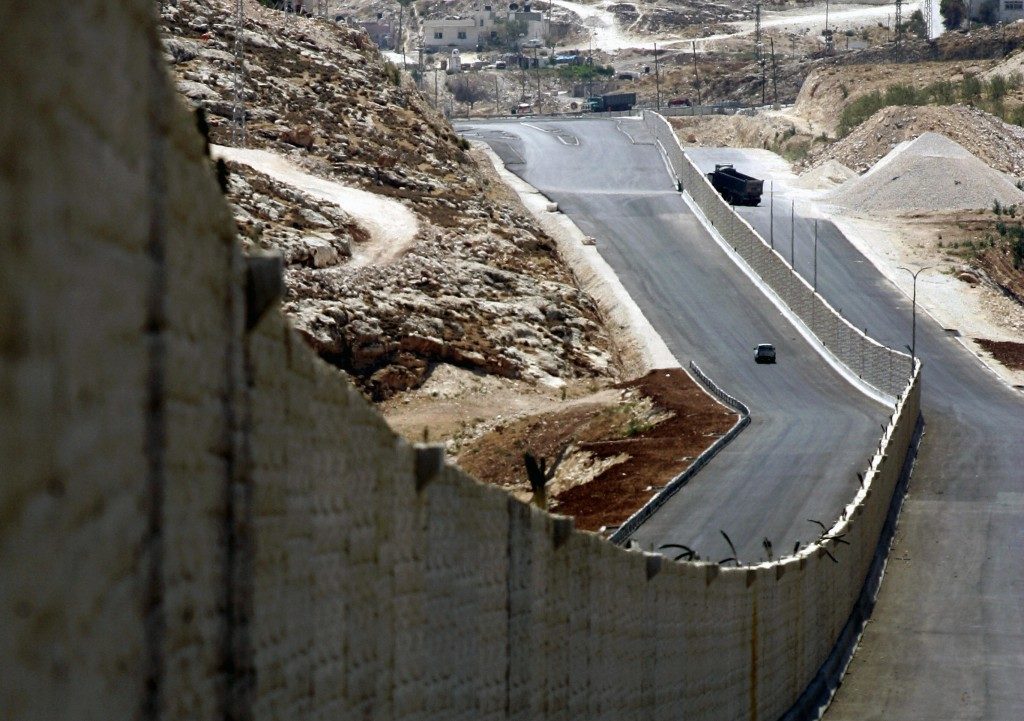 A concrete wall near Ramallah keeps apart Arabs and everyone else.
Photo by Abbas Monmani/AFP/Getty Images

Then there is international law. What is often left unsaid in much of the debate over Israel and the A-word is that one can legitimately debate whether, or to what extent, modern Israel resembles apartheid-era South Africa. In the occupied West Bank, with its “separate and unequal” road networks, water systems and housing policies, and where Israeli settlers are bound by Israeli civil law while Palestinians are judged according to Israeli military law, it seems an open and shut case. Inside the Green Line, where Palestinian citizens of Israel have the right to vote and stand for parliament and where Arabic is an official language it is, admittedly, less clear-cut. However, human rights groups like Adalah point to more than 50 different laws or bills in Israel that privilege Jews over Arabs or discriminate in favor of Jews in areas such as housing, education and family reunification.

Yet under international law, apartheid is a specific crime with specific definitions, independent of the South African experience. The 1973 International Convention on the Suppression and Punishment of the Crime of Apartheid widened the definition of apartheid to “similar policies and practices of racial segregation and discrimination as practiced in southern Africa” and applied it to “inhuman acts committed for the purpose of establishing and maintaining domination by one racial group of persons over any other racial group,” including the denial of free movement and the expropriation of land.

Four years after the collapse of the Afrikaner regime in South Africa, the 1998 Rome Statute, which established the International Criminal Court (ICC), defined apartheid as

“inhumane acts…committed in the context of an institutionalized regime of systematic oppression and domination by one racial group over any other racial group or groups and committed with the intention of maintaining that regime.”

From a strictly legal perspective, therefore, whether or not Israel is identical to, or even resembles, apartheid-era South Africa is, frankly, irrelevant. The only issue that matters is whether Israel is in violation of international law. In 2009, a team of academics and lawyers commissioned by South Africa’s statutory research agency concluded that Israel maintains “a system of domination by Jews over Palestinians” and “this system constitutes a breach of the prohibition of apartheid.” In 2013, another study co-authored by international law professor and former UN special rapporteur on human rights in the Occupied Territories, John Dugard, found “Israeli practices in the occupied territory are… in breach of the legal prohibition of apartheid.”

Back in 1967, Goodman understood in a flash what Ben Gurion was trying to say. Today, defenders of the Jewish state refuse to understand the warnings of former Israeli prime ministers, the condemnations of South African anti-apartheid activists, and the clear strictures of international law. For Palestinians, however, this is far from an academic issue or a mere debating point. For fifty years they have been the victims of discrimination, segregation and oppression. How much more do they have to endure?