14 Apr 2017 – It’s half a century overdue for Lebanon to grant Palestinian refugees, now the fourth post-Nakba generation, the most elementary civil rights to work and home ownership. Both fundamental rights are mandated by international law and enjoyed by every refugee on our planet. Sauf Lebanon.

As a direct and foreseeable consequence half of Lebanon’s 12 Palestinian refugee camps and several dozen refugee “gatherings” are careening toward violence while most Lebanese politicians, some of whom are clients of other countries, turn a blind eye or dither.

One example is East Saida’s Ein al Hilweh camp where nearly one hundred thousand refugees, including approximately 7000 from Yarmouk and other Palestinian refugee camps in Syria live in squalor on just 2 Sq. Km of space. Arguably the most sardine-canned population on earth today.

April 12, 2017 marked the sixth day of clashes as Palestinian joint security force mobilized to enter the notorious Al-Tiri neighborhood of Ein al-Hilweh as UNWRA was forced to close its nine schools which educate many thousands of camp children and its two medical clinics which treat hundreds of patients daily. At least 20 stores and homes were burned to the ground during the fighting.

Al-Tiri is a stronghold of extremist Bilal Badr and his supporters, who have been engaged in clashes with the Fatah Movement since last week. The fighting has so far left ten dead and more than 60 wounded over six days, including numerous civilians.  On 4/13/2017 a local Palestinian security force numbering 100 fighters from several Palestinian factions, was finally able to deploy throughout most of the camp as Islamist militants went, for now at least, into hiding. 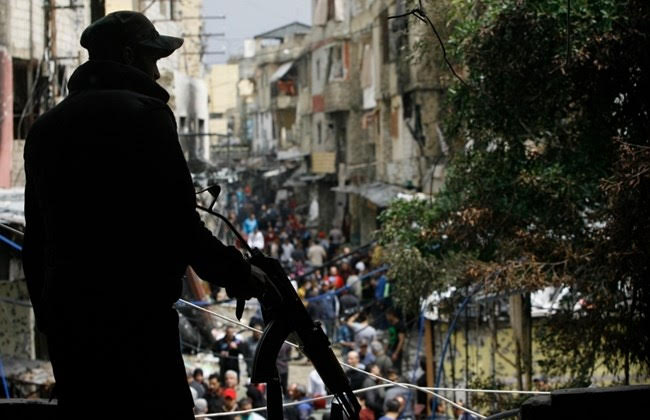 Without the right to work or the right to own a home in Lebanon, there are few hopeful signs from young Palestinians here about their future. But there are some. And one is similar to the Arab revolts of 2010–11, being a growing rebellion among camp Palestinians in Lebanon against paternalism and their growing demand for elementary civil rights. For Palestinians this means the right to work and the right to purchase a home. The younger generation of Palestinians here is increasingly turning away from the traditional Arab reverence for “strong man paternalism” whether in politics, culture, or religion. They seek a reorientation and erosion of the current autocracy by sectarianized politicians in Lebanon who many argue have been the main barrier to the achieving the elementary right to work. This rejection of the old order is unfolding against the backdrop of changes in the Palestinian population’s demographics and psyche.

Whatever is the veracity of the oft repeated claim that David Ben-Gurion tried to encourage militia under his control half a century ago during the 1948 Nakba when his forces ethnically cleansed 57% of Palestine’s indigenous inhabitants and his followers: “Don’t worry!. The old will die and the young will forget.” He was partly right. But he could not have been more wrong about today’s young Palestinians forgetting their history, culture and country as the 4th generation of Palestinians here increasing demand Full Return to Palestine.

Ben-Gurion’s intent was clear and his thinking is reflected in a 1937 letter to his son, wherein he wrote: “We must expel Arabs and take their place. … if we are compelled to use force – not in order to dispossess the Arabs of the Negev or Transjordan, but in order to guarantee our right to settle there – our force will enable us to do so.”

The old have indeed died among the three quarter million Palestinians who experienced the trauma of ethnic cleansing from their homeland by Zionist gangs. Only a few thousand of the original refugees are still living, half a century after the 1948 Nakba. A two year study of survivors in Balata camp in Nablus found that among the dozens interviewed in 2003 on one in 24 were still alive in 2015.

Today’s 64 Palestinian refugee camps and scores of ‘gatherings’ bear witnesses to these massive crimes against humanity. Fifty eight camps are registered with the United Nations Relief and Works Agency for Palestine Refugees in the Near East (UNRWA), being 19 camps in the West Bank, eight in the Gaza Strip, ten in Jordan, nine in Syria and 12 in Lebanon.

Three of the original 16 camps in Lebanon were destroyed and one transferred its population other camps. In 1974, the Israeli air force demolished the entire Nabatiyeh camp, displacing about three thousand of its inhabitants. In the summer of 1976, the al-Kataeb Party (Christian) Forces and their allies besieged the Tel al-Za‘tar, eventually destroying it after 52 days of resistance, with three thousand of its people killed, mostly civilians, and around twenty thousand displaced anew. In September 1982, the Sabra and Shatila massacre took place at the hands of the same forces, under Israeli military cover, killing about three thousand Palestinians and Lebanese; this bloodbath became one of the most prominent testimonies to the suffering of the Palestinian people in the countries of refuge.

The number of Palestinians living in camps here in Lebanon has doubled while the authorities have outlawed camp area expansion.  Consequently camp residents have had to add rooms skyward such that today more than one third of the houses never are touched by sunlight and  more than half of the alleys are so narrow that cars cannot pass and even the moving furniture is blocked forcing it to be lifted to roofs by rope. Camp alleys can barely accommodate two people walking side by side with hundreds of dangerously exposed electric cables above their heads surrounded by dilapidated infrastructure. In the past 36 months more than two dozen camp residents have been electrocuted in Burj al Barajneh camp near Beirut’s airport. The power supplying camps is cut more than 12 hours a day while three quarters of the refugees live below the poverty line. This as drug use and respiratory and other diseases rise along with unemployment, school dropout rates and Palestinian youth sense that that they have no future.

Most experts who have studied this subject argue that these problems would be resolved if Palestinians were allowed the right to work. Indeed studies by the UN International Labor Organization (ILO) and several economic studies by Universities and others have shown that if Palestinian refugees were granted the right to work Lebanon’s ailing economy would dramatically grow and Lebanon would achieve much needed infrastructure rehabilitation, including electricity, water, garbage collection and disposal, road repairs, and medical services.

A related cause of growing unrest in Palestinian camps, as they careen toward violent explosion, is the poisonous 18 sect sectarianism based Lebanese society-fueled the past decade by the growing Sunni-Shia conflict. Some who claim to be part of a “Resistance” have exhibited no willingness to act to improve camps conditions, partly because Palestinians are nearly all Sunni or Christian. Partly because they wait instructions from their regional sponsors.  A true Resistance would support the camps in their struggle and recognize that resistance begins with supporting the camps, while using their power in Parliament to provide assist with infrastructure, employment opportunities and health and educational services.

These appalling conditions attract outsiders with non-camp agendas and today they are posing great dangers. For example, more than 5 thousand fugitives wanted by the Lebanese judiciary reportedly reside inside Ein al-Hilweh camp on various charges, some expired. The Lebanese Army (LAF) continues to pressure camp residents with erected walls, sand barriers, and checkpoints and prohibit home improvements while restricting the work and activities of UNRWA.

Another factor is the failure to achieve a unified Palestinian political, military, and security administration to enforce order and bar outsiders who enter and align with various Palestinian factions while encouraging in-fighting, especially between Fatah and Islamic groups which Fatah has failed to eradicate. This is exacerbated by the lack of Lebanese government interest, including most political factions in the living conditions of Palestinian refugees and in improving, their economic and social conditions. At the same time they ignore camp security and any camp development planning. There is also a growing radicalism in Ein al-Hilweh and some of the other 12 camps in Lebanon influenced by conflicts and divisions in the region.

Ein al-Hilweh has often experienced the entry of fugitives to the camp, such as Badi‘ Hamadah, who killed three Lebanese soldiers in 2002 and was later executed, Fadil Shaker, who entered the camp after the clashes in Saida’s suburb of ‘Abra in 2013, and Shadi al-Mawlawi, who took up residence in the camp in 2014. For years the Palestinian factions have failed to apprehend them, and today some enjoy the support of certain groups in the camp. Recently there has been an increase in the number of Islamist fugitives in the camps from various countries in the region who are targets of the global “war on Terrorism.”

To its credit, the Palestinian Authority Security Forces (PASF) in Ramallah has tried to apprehend and prosecute or kill the Islamist fugitives in Lebanon’s camps and elsewhere. But their efforts have been largely stymied by the fact that while Fatah seeks to regain its diminishing ‘zones of influence” in some of the camps they have faced opposition from many factions who oppose the political, social, and ideological orientations and who reject many of the policies and programs of the Ramallah based PLO.

Against this dismal backdrop, and the deprivation of the most elementary civil rights to work and to own a home, the situation in Lebanon is increasingly likely to explode, first in Ein al-Hilweh, next in Shatila and then perhaps Bedawi camp near Tripoli and Rasheidiyeh camp in Tyre, followed by others.

Lebanon’s largely dysfunctional government is unlikely to meet its international legal obligation to grant Palestinian refugees the most elementary civil right to work and home ownership without the immediately application of serious international pressure and sanctions including the suspension of foreign aid. To be lifted only when these mandated civil rights are written into law.

Anticopyright: Editorials and articles originated on TMS may be freely reprinted, disseminated, translated and used as background material, provided an acknowledgement and link to the source, TMS: Lebanon’s Outlawing of Palestinian Civil Rights, is included. Thank you.