Protection of Law and Justice for Peace through Universal Peace Education

There were practitioners of justice who fought against unjust laws and lost their lives for justice and peace. Among them, Jesus Christ (who translated passive justice into active love), Socrates (who fought for the freedom of speculation), John Huss (who advanced unorthodox doctrines), Giordano Bruno (who revolted against religious bigotry) were crucified, poisoned to death, burned at stake and burnt respectively. A great Quaker Thomas Garret, who acted in the emancipation of slaves, was convicted and fined.

After the Amritsar massacre, Mahatma Gandhi said, “I can retain neither respect, nor affection for a government which has been moving from wrong to wrong… The government must be moved to repentance.  I have therefore ventured to suggest non-cooperation, which, if unattended by violence, must compel government to retrace its steps and undo its wrongs.”

At his trial, Gandhi admitted his guilt. He confessed that he had deliberately broken the law. He said to Judge Broomfield, “I do not ask for mercy. I do not plead any extenuating act. I am here, therefore, to invite and cheerfully submit to the highest penalty that can be inflicted upon me for what in law is a deliberate crime and what appears to me to be highest duty of a citizen. The only course open to you, Sir, is either to resign your post or inflict on me the severest penalty.” Broomfield replied to Gandhi, “It would be impossible to ignore the fact that in the eyes of millions of your countrymen, you are a patriot and great leader. Even those who differ from you in politics look upon you as a man of high ideals and of noble and even saintly life.” However, the judge, having praised Gandhi for the justice of his cause, sentenced him to prison for the illegality of his conduct. This story was told by a Professor of Law at Harvard to explain to his students the decision in a famous court trial. One of the students objected saying, “This may be legal, and Sir, but it is not just,” whereupon the Professor replied with a cynical smile, “If you want justice, young man, go across the street to the Divinity School.  This is the Law School.” And Justice Oliver Wendell Holmes Jr. once said about Court, Law and Justice, “This is a Court of Law, Youngman, not a Court of Justice.”

Advocate Bram Fischer was one of the great figures of the Bar in South Africa during the apartheid era. He said in his trial which very much concern law, justice and morality, “…My Lord, when a man is on trial for his political belief and actions, two courses are open before him. He can either confess to his transgressions and plead for mercy, or he can justify his beliefs and explain why he acted as he did. Were I to ask for forgiveness today, I would betray my cause. That course my lord, is not open to me. I believe that what I did was right, and I must therefore explain to your Lordship what my motives were, why I hold beliefs that that I do, and why I was compelled to act in accordance with them. …

I accept, my Lord, the general rule for protection of a society laws should be obeyed. But when the laws themselves become immoral, and require the citizen to take part in an organized system of oppression – if only by his silence and apathy – then I believe that a higher duty arises. This compels one to refuse to recognize such laws. And Bram Fischer was sentenced to life imprisonment for his protest against the apartheid law.

And Socrates in his trial said, “I thought it my duty to face the danger out in the cause of law and justice, and not to be accomplice in your unjust proposal, from the fear of imprisonment or death.” And he was condemned to death.

Judgments as punishment in the case of Mahatma Gandhi, Bram Fischer and Socrates for disobeying the unjust laws of their respective nations, views of Harvard Professor of Law in the Court’s decision of Mahatma Gandhi’s trial and opinion of Justice Oliver Wendell Holmes Jr. about Court, Law and Justice reveal the truth that laws did not carry justice.

Judiciary has limitation of law of the land. If law is based on injustice, and even if a judge wishes to deliver justice to the litigants in the court of law, he or she cannot do so. He or she has to pronounce his or her judgment as per the law of the state. Thus judiciary acts upon the laws of the nations. “Law Courts”, not the “Courts of Justice” are there. Hence there is no hope of justice from judiciary in non-democratic States, because injustice is inherent in the laws of in these nation-states, which numbers are much more than democratic states.

However, it does not mean that people can get justice from the judiciary in democratic nation-states. No doubt, in democratic and semi-democratic nation-states, which numbers are much less than non-democratic nation-states in the world, theoretically laws are based on justice and court is considered as “Temple of Justice”, and judiciary has independent identity in deciding the case. But practically, in democracy, laws are twisted and manipulated, and justice is hijacked by rich, mighty and tricky people of the society. Here the court, the “Temple of Justice” becomes “Market of Justice”, where selling and buying of justice are being done. In the courts, in most cases, justice is delayed; in some, it is denied; and there are many cases, which never reach to the courts to get justice due to lack of proper means. Hence Jefferson has doubt on judiciary in democracy and warned saying, “Nothing is more dangerous to democracy than the independent judiciary.” Certainly his doubt is hundred percent realities because wherever  there is democracy in practice in the world today, a very few privileged well-to-do people are fortunate to be learned, trained and expert in certain skills and knowledge to exploit their fellow-people who are unfortunate due to being deprived of having proper means and resources to receive even their mis-education.

Therefore we need total education in all (in all the elements inherent in the people) and for all  (for all the people) to be truly educated man (human being) for creating better laws to be based on justice and practice them for mutual benefits. We should conceptualize and practice the universal peace education, based on five elements, viz. body, vitality, mind, intellect and spirit, that is man-making education which would help all the people to grow means to grow in all the elements which universally inherent in all the people everywhere without any discrimination.

Hence this universal peace education should be available for all leaving none. It will not be limited only for class-rooms for certain periods. This universal peace education is life-long perpetual integral manifestation of these inherent five elements in every man and woman everywhere leading them to be just and peaceful, and making them free from violence (if they are perpetrators or victims of violence). And thus, this peace education is for justice, perpetual peace, solution of violence, and helps for sustenance of human survival. Integral manifestation of all the five elements makes men and women divine (just and peaceful) like Maryada Purushotam Shri Ram, Lord Shri Krishna, Lord Buddha, Socrates, Jesus Christ, Prophet Muhammad, John Huss and the other alike persons, partial manifestation of these elements makes them devil like Hitler, Mussolini, Stalin and the alike persons, and total non-unfoldment of the five elements makes them slaves, and the life of the slaves are miserable because they are forced to serve other well-to-do people even to meet the two-times meals to feed the bellies of their and other members of their family, here the dictum: ‘In slavery, there is no happiness even in dreams,’ is justified.

So, let the universal peace education, which is the parent of justice and grand-parent of peace, give a chance to be practiced first everywhere to enable the guardians, viz. rulers, bureaucrats, judges, teachers, and other professionals, religious preachers, parents, and adult common masses of the society of both types of nation-states – democratic and non-democratic to be just to give birth to peace, and for the sustenance of justice and peace, they should facilitate the means and resources to the members of coming new generations in their respective houses to follow their practice of universal peace education. 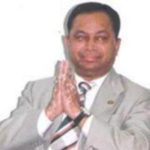 Anticopyright: Editorials and articles originated on TMS may be freely reprinted, disseminated, translated and used as background material, provided an acknowledgement and link to the source, TMS: Protection of Law and Justice for Peace through Universal Peace Education, is included. Thank you.