Settled Wanderers: The Poetry of Western Sahara by Sam Berkson and Mohamed Sulaiman

Subtitled ‘The Poetry of Western Sahara’, this remarkable book is far more than a collection of poetry, little-known in the English-speaking world. It is a concise history and geography of the Saharawi people, the lives of their poets; a glossary and explanation of the unique language of this nation, Hassaniya. Its translation into Arabic and English, and not least of all, the written words of all languages are enhanced and illustrated by the wonderful art work of Sulaiman who uses Arabic script to form evocative portraits and images. He is also the fine translator into English of the poetry. Berkson, whose sensitive poems form Part 2, has done an excellent job of weaving it all together. 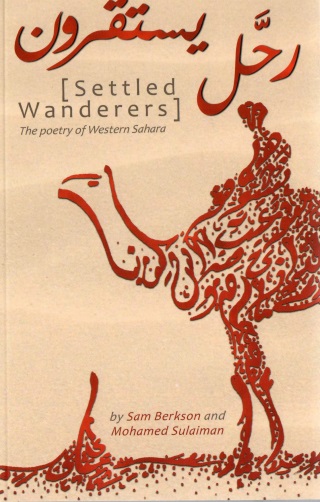 The poems of the Saharawi reflect their loss and longing for their homeland as they wait in refugee camps in Algeria for the world to recognize their claim for justice. In Tishuash by Badi, the poet recalls the freedom of wandering:

…the only sound the swishing of camels’ tails/ before the sun has risen to our eye line;/ walking on to those first lucid hours of day/ when the desert’s features are clearest,/ knowing both rocky valley/ and the smooth.

The exiles in the camp are constantly aware of the oppression of their relatives and friends in their occupied country. When peaceful resisters set up a camp in Gdeim Izak which was months later destroyed by the Moroccan military, many activists were jailed and tortured – they remain in inhumane conditions in Moroccan prisons. Poet Hjuatu honours them in her words:

The people of Gdeim Izik/ sacrificed everything they might/ until they disgraced the invader/ with a resistance that showed wrong from right.

The English author Sam Berkson went to the camps to meet the poets living there and to experience their life in exile. His own poetry reflects his response to the injustice meted to these almost forgotten people. This book should be read by heartless world leaders. Berkson conveys with few words and powerful images the sense of waiting, faltering hope and fading memory of the refugees in a desolate desert. In Friday Afternoon in Smara he writes:

…The heat turns everything/…Flies are nothing but the whine of a broken clock/ that has, forever many lost hours, patiently stopped./…Only the children ignore the signs/ They whisper among us, knowing we are dead,/…restless with the budding energy of young lives/ in a desert of hopes and heat-blasted time.

The book ends with an extensive glossary, Arabic explanations and personal biographies of all the contributors, adding greatly to the breadth and value of this wonderful opening of the tent flap into the Saharawi culture.

Theresa Wolfwood is a Western Sahara solidarity activist in Canada; she visited the refugee camps in 2013; her poem about the Saharawi exile is in her collection Love and Resistance, published by Smallberry Press, London, UK. For more information see www.bbcf.ca and Friends of Western Sahara Facebook page.

Anticopyright: Editorials and articles originated on TMS may be freely reprinted, disseminated, translated and used as background material, provided an acknowledgement and link to the source, TMS: Settled Wanderers – The Poetry of Western Sahara, is included. Thank you.