Since ancient times, human existence has been recorded on murals. From cave painting to street art, people have been using walls as a means to communicate and leave a sign of their own existence. Thanks to studies of ancient cave art, we have learnt a lot about our ancestors and how they lived, as well as today, graffiti can be perceived as a mirror of our society. 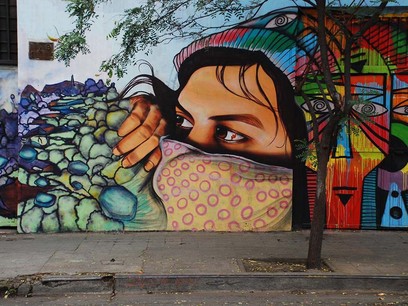 27 Mar 2017 – Seen through the eyes of a street artist, our cities are like a multitude of canvas where ideas can be expressed freely. In contrast with economic interests for which every piece of land – or wall – is an opportunity to make profit, street artists reclaim those areas that have been either neglected and “forgotten” or sold off to advertiser.

They cross the line of legality, slipping away from regulations. Whereas in the conventional world, some artwork can be sold for millions of dollars, street artists give away their creations for free.

Despite the stationary condition that characterize street arts – if you want to see them, you have to go where they are located – the advent of technology has transformed some of them into iconic images.

Today artists like Bansky, Blue or Shepard Fairey (Obey) are known and appreciated worldwide, and this is intensifying the controversy over the most unconventional among art forms. Is street art a crime or an art form? An act of vandalism or urban renovation?

These questions remain unanswered. Probably because it is difficult to trace the line between right or wrong.

We might like some coloured tags on the walls especially in those abandoned areas along the railway, but we are less happy to see graffiti on a train, especially if they cover the whole window and we can’t see through it.

Recently, the administration of São Paulo has put in place new measures to “clean” the city. In an effort to renew the urban landscape, some of the colourful graffiti walls have turned into grey ones.

Apparently, the new major – João Doria – literally repainted some of the walls, declaring in an interview that “the city is dirty, poorly cared for and covered in pray-paint tags”.

Besides his showman’s approach to promote the project “Cidade Linda” as a priority of his administration, there has been diverse reactions by the residents. Some are on board with the new programme while others see graffiti as a form of expression and as a distinctive sign for which the city is known.

Among the many, the new administration has covered a graffiti that had been commissioned by its predecessors. In an attempt to capture the consensus of those complaining with the “cleaning programme”, Doria’s administration has identified a few areas in the city designated as legal graffiti spots. According to it, spray painting is allowed but only within certain boundaries which is not exactly in line with the roots of street art movement.

Institutions are not the only one unable to deal with graffiti, the conventional art world seems to have some difficulties, too. Last year, Bologna (Italy) hosted a temporary exhibition on Street Art, just a few months after the same city had launched a “no tag” project that aimed at cleaning the “dirty” walls.

The paradox of the exhibition is that basically all art pieces had to be removed from their original location.

The permission to do it was usually asked to the owner of the wall and not to the author. Blue, one of the most famous street artists in the world, have publicly complained with this initiative and has tried to covered up his graffiti before they were taken away.

Street art is about transgression, breaking the rules and slipping away from what is conventional. Trying to trap it within boundaries is nonsense and it would deny its essential characteristics.

Giulia D’Ettorre is an architect with interests in sustainable design and urban planning strategies to build resilient cities.