The Exclusion and Structural Discrimination of Roma in Europe 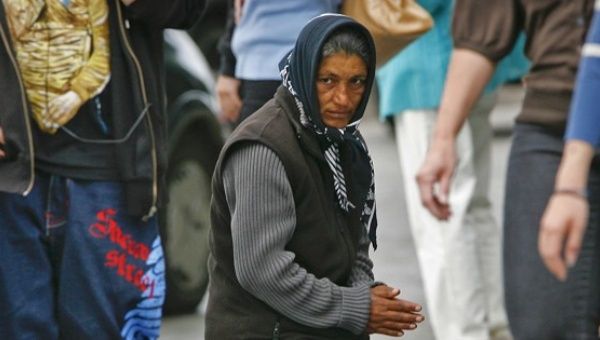 In some countries it is illegal to identify as Roma in legal documents. | Photo: Reuters

8 Apr 2017 – We have recently seen an explosion of books, articles and reference papers finally naming the oppression of Roma as an externally constructed phenomenon, based on exclusion and structural discrimination.

RELATED: Europe Can No Longer Pretend to Respect Human Rights

In part because of the painstaking work of research that goes into the Romani remembrance and identity building movement, we are seeing a momentous shift in the way Roma see themselves across Europe, as a people excluded not because of their own faults but as populations kept marginal as a matter of state policy.

These arguments are made in detail by Aidan McGarry in his new book on “Romaphobia,” where he identifies the exclusion of Romani populations from public goods as part of nation building in European countries. McGarry shows how historically newly nationalist states needed to point to populations who did not belong to the mythical nation state so that by contrast, they could exalt their preferred subjects and build among them a questionable solidarity. Fomenting Romaphobia (and anti-Semitism) allowed nascent nation states to find the outsiders against whom these exalted subjects could unite.

But there is another argument that could be made for the enduring nature of antigypsyism: that far from being purely excluded, Romani people have always been part of the fabric of European societies, but have been allowed to remain on condition of fulfilling the role of the least favoured in society, lower than serfs and in some instances, legally enslaved.

In this way, the exploitation of Roma labor has been (mis)used to build European societies and nations. Vast wealth has been amassed by the few — specifically the crown, the church and the landowners, but also by extension by well-to-do non-Roma — at the expense of large numbers of Roma people kept in degrading conditions and excluded to make sure they don’t rebel against their lot in life. This ensured that whatever your station in life, there was always someone lower down who could do the dirty work and who could be exploited further, so that you could still survive well enough in the stacked system of exploitation that we all live in.

Adam Ramsay has made this kind of argument brilliantly with regards to how colonialism has been used to similar effect in the UK. It is now time to confront and become accountable, morally, politically and perhaps eventually economically, for the historic theft of Roma labor that has underpinned the emergence of European states, as Margareta Matache and Jacqueline Bhabha point out in this timely and encouraging article.

Vignettes Tell a Story of Subservience

Once we, the authors of this article, started thinking about this topic, we found that the proof we need to make our argument was all around us. For a start, all Europeans can relate to the following anecdotes if we take the time to reflect on our personal relationships with Romani people and communities.

Those of us who are Romani can usually tell a version of the following story, recounted from personal experience by Isak:

“Even now in my small village the best Roma in the village is one guy who still works for these Serbs for morning to evening for whatever they give him. The Serbs consider him ‘the best Roma in the village,’ the rest who don’t want to work for the Serbs are ‘bad Roma’, they are seen as rebellious/traitors. You are not regarded as a good person if you don’t work as a servant.”

Those of us who are non-Romani, if we care to cast our minds back to our rural childhoods, will recall our families allowing or not allowing the Roma to pass over our land, using Romani workers for the dirtiest of jobs (like cleaning out stables) and paying them a pittance or not at all, or more recently, passing by Roma begging in the streets and regarding them as non-people, arrived at this station in life somehow because of their own fault.

Only recently in very polite conversation, Violeta overheard a couple of Hungarian ladies lament the fact that ‘you can no longer get any Roma to clear out the bracken in the garden, they have all gone to work abroad!’ – with the implication that they should not go and work abroad since it is their duty to stay and do the unwanted physical work of those of us who have better things to do with our time.

History of Slavery Lives on

However, the small stories above are only echoes of all-encompassing and thoroughly entrenched power relationships between non-Roma and Roma: relationships that have for centuries ruthlessly exploited the work of Roma for the benefit of non-Roma majority populations.

This is evidenced by the history of Roma enslavement and the persistence of feudal relationships in many countries – institutionalized or just tacitly practiced on the ground.

In one of the most stark and convincing examples, non-Roma wealth in Romania (of the crown, of the church and of landowners or even wealthy peasants) has been built on the institution of Romani slavery in a way similar that the wealth of white people elsewhere (UK and Western Europe, and the US) has been built upon centuries of exploitation of black people, whether through colonialism or enslavement. Almost identical bills of sales for Roma slaves in Romania, dated centuries apart, have been documented by Romani historians such as Ian Hancock, and show an unbroken institutionalized context for the practice of slavery.

RELATED: The Global Rise of Xenophobia

A number of Romani activists and artists are already raising this issue through their work and they deserve a wider audience. Hopefully, everyone with an interest in the subject has watched the film Aferim!, winner of the silver bear for Best Director at Berlinale 2015.

More recently, Romanian Roma actor and director Alina Serban has won widespread acclaim for her play ‘The Great Shame’, detailing both the history and the present day effects of Roma enslavement. The official day of February 20 that commemorates the liberation of Romani slaves in Romania is a good start to teaching us more about this history and its effects that we all need to internalize.

Commemorating it might help us see how not only the memory of the institution of slavery but also an understanding of its after-effects have been erased from our contemporary reality. Because make no mistake: the modern hand of the state, through keeping Roma excluded from access to public goods in a myriad of institutionalized ways, is built on this enslavement and servitude of Roma and ensures that wealth has historically stayed and continues to remain in non-Roma hands.

The same practice of exploitation lives on at an institutional level in Hungary in workfare programs that force the (mostly Romani) unemployed to work for a pittance at the mercy of local politicians. Szilvia who has many years of experience supporting Romani communities to develop advocacy programs, has noticed the following:

“What they [local authorities] are currently doing in Hungary with people in the public employment [workfare] system is that they are putting them to work cleaning the streets, cleaning the backyard of the mayor, for pay that is about half the minimum wage and should actually be given as benefits.

Roma are organized in groups with a supervisor and they do this work every day. It is very unimaginative and degrading. This makes them depend more on the system, the mayor and the local council representatives who are the ones who will run in local elections. People are classed as low-level workers, just because they are Roma. There are some non-Romani people involved in public employment system, but they are treated differently, they get better jobs, and those are individually tailored to their skills.

How they treat Roma and non-Roma public employees is very different. Our program concluded it is because of discrimination, that stereotypes exist in all institutions against Roma. This employment system is a big trap, because there is no way to get out into the primary labor market or the open labor market. Usually, the mayor or those very close to them are treating the people as their servants and Roma people themselves who work in the system get to think that they are the servants of the mayor and the local representatives.”

Solidarity Can Teach us a Lesson

Similarly to the subservient role imposed upon Indigenous people in other places, the oppression of Roma – called depending on your viewpoint, either antigypsyism or Romaphobia – is motivated and persists as much for the economic gain of the majority European non-Roma population as for parallel and reinforcing reasons connected to nation building by exclusion.

There is much that Romani and other Indigenous movements can learn from each other about how to dismantle this history of subservience and that work is happening in many ways through activists involved in the Romani and indigenous rights movements.

In the meantime, it is important, on International Roma Day, for each of us to become aware of and actively do our own learning about this subject. Going after our personal histories of how we relate to Romani communities may help us understand how we fit into the larger, institutionalized system of oppression and exclusion.

Szilvia Rezmuves studied management and leadership and was a research referent at the CEU Center for Policy Studies. Currently Szilvia works as the head of the Social Integration Unit of the Partners Hungary Foundation.

Isak Skenderi is the Executive Director of Voice of Roma, Ashkali and Egyptians NGO in Pristina, Kosovo.

Violeta Vajda is a Ph.D. researcher at the University of Sussex and the Institute of Development Studies in the United Kingdom. She writes about how non-Roma identity can be reconfigured in light of critical race theory to become empowering and transformational.