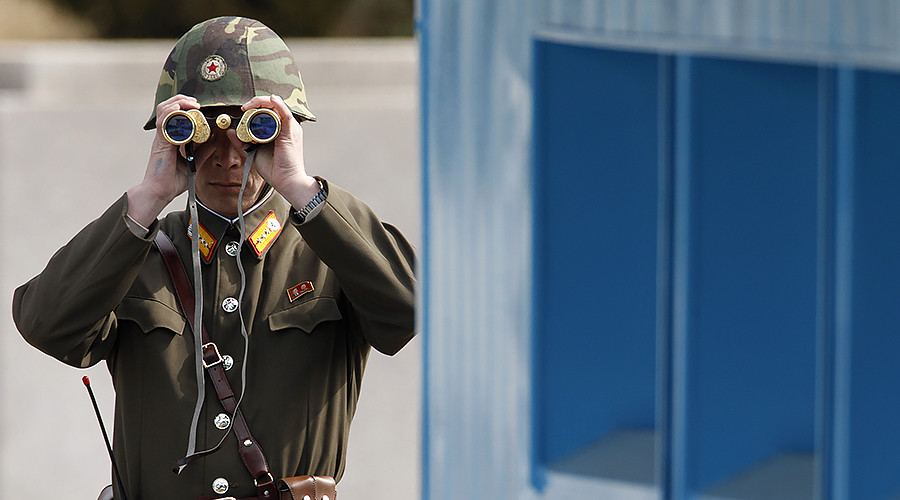 23 Apr 2017 – In recent days, the Trump administration has been issuing threats against North Korea, the nuclear-armed pariah state, escalating tensions and creating a potentially catastrophic situation in East Asia.

Ridiculously, many people in the West are worried about the situation not because of Donald Trump’s insane militarism, but that of North Korean leader Kim Jong-un. Such thinking is irrational and ahistorical, and is rooted largely in mass-media deception and good old-fashioned ‘Yellow Peril’ racism.

The war waged by the US and its allies against North Korea (1950-53) was nothing short of genocidal. All major cities were destroyed. At least 20 percent of the population was killed. Only through extraordinary heroism and creative genius – along with the selfless support of China and the USSR – did the country survive. Since then, the North Korean people have lived every single day under the threat of nuclear annihilation.

As Bruce Cumings, the leading Western academic expert on the DPRK, puts it:

“North Korea is the only country in the world to have been systematically blackmailed by US nuclear weapons going back to the 1950s, when hundreds of nukes were installed in South Korea… Why on earth would Pyongyang not seek a nuclear deterrent? But this crucial background doesn’t enter mainstream American discourse. History doesn’t matter, until it does – when it rears up and smacks you in the face.”

The DPRK’s leadership never tires of pointing out that it doesn’t actually want to be a nuclear state; its demand is for denuclearization of the whole Korean Peninsula. However, given the nuclear threat that it lives with, it is by no means unreasonable for it to develop a deterrent.

What about talks? The DPRK has consistently said it is willing to engage in negotiations, as long as these don’t take place in a context of bullying and threats. China has worked hard over the years to facilitate such talks. It is precisely the US that has made bilateral or multilateral talks impossible, by including an unreasonable and hypocritical precondition that the DPRK abandon its weapons program.

Any reasonable person wants to see a nuclear-free Korean Peninsula and to avoid a nuclear war. The key first step towards this is for the US to drop its preconditions to negotiations, and to lessen its aggressive stance – at least by reciprocating the North Korean assurance of nuclear no first use. Negotiations will need to cover a number of tough issues, including the removal of US troops from South Korea, removing the nuclear threat against North Korea, and steps towards national reunification.

Resolution on these issues feels out of reach after so many decades of mistrust, but as Selig Harrison writes in his authoritative book, Korean Endgame: A Strategy for Reunification and U.S. Disengagement,

“if the United States agrees to play the role of an honest broker and to remove what North Korea regards as threatening aspects of its conventional force presence, in return for missile limitations, Pyongyang would be more likely than it is at present to give up its nuclear weapons option and to permit a meaningful inspection regime.”

Under international law, countries have the right to independence and sovereignty; to choose their own path, even if that path doesn’t correspond with the needs of US economic, political, cultural and ideological domination. Do you want the DPRK to be less of a siege state; to devote more resources to social welfare and less to military development? Fine. The key to that is taking away the constant threat of war, nuclear annihilation and regime change.

North Korea is full of normal human beings who want to enjoy their lives, live in peace, raise their children, learn, love, socialize, dance, sing, and so on. They don’t have the same ideology as modern westerners, but frankly that’s not an entirely bad thing. And in many respects the DPRK is surprisingly successful.

An internal CIA study almost grudgingly acknowledged various achievements of this regime: compassionate care for children in general and war orphans in particular; “radical change” in the position of women; genuinely free housing, free health care, and preventive medicine; and infant mortality and life expectancy rates comparable to the most advanced countries.

Life expectancy at birth is 70.4 years. Hospital bed density (number of hospital beds per 1,000 of the population) is 13.2 – quadruple that of the United Kingdom. The entire population has access to improved drinking water. The literacy rate is 100 percent. Think these statistics come from the DPRK’s ministry of propaganda? They’re from the CIA World Factbook. Most developing countries would be very happy to achieve such figures.

Bombing the Korean people would be reckless and unjustifiable; all sides must work to avoid war. The international community has almost unanimously condemned the DPRK’s nuclear missile tests as an unacceptable provocation. However, there should also be recognition of Washington’s double standards.

As General Charles Horner, former commander of the US Space Command says:

“It’s kind of hard for us to say to North Korea, ‘You are terrible people, you are developing a nuclear weapon,’ when the United States has thousands of them.” (cited in Harrison, op cit)

It’s time to stop the escalation of tensions and for all sides to sit down at the negotiating table.

Carlos Martinez is a political activist, analyst and musician from London. He runs the political history blog Invent the Future, and produces hip-hop under the name Agent of Change.