When Science Brought Americans and Russians Together

11 Apr 2017 – The first Russian explosive device to land on US soil wasn’t delivered by a Russian missile, as Americans feared might happen throughout the Cold War. It was delivered by FedEx. The device, an explosive magnetic flux compression generator, arrived at Los Alamos National Laboratory in late 1993, shipped from the Russian Federal Nuclear Center VNIIEF. It allowed Los Alamos and VNIIEF scientists to conduct a groundbreaking joint experiment to study high-temperature superconductivity in ultra-high magnetic fields.

The shared excitement and jubilation the scientists involved felt over successful experiments like this were testament to a profound shift. Less than two years after the dissolution of the Soviet Union and some 18 months after the remarkable and improbable exchange visits between Russian and American nuclear weapons lab directors, scientists from Los Alamos and VNIIEF were conducting experiments at each other’s previously highly secret sites. Some of these scientists had helped design their country’s hydrogen bombs. Now, they were focused on fundamental scientific discovery.

The Soviet nuclear weapons program was built on the shoulders of scientific giants—Yuli B. Khariton, Igor V. Kurchatov, Igor E. Tamm, Andrey D. Sakharov, Yakov B. Zeldovich, and many others—just as the American program was built on the shoulders of J. Robert Oppenheimer, Enrico Fermi, Hans Bethe, Edward Teller, John von Neumann, and many more. Unlike their American counterparts, though, Soviet weapons scientists labored in secrecy during the Cold War. When Soviet leader Mikhail Gorbachev lifted the Iron Curtain, curiosity about US research and a pent-up desire to cooperate internationally led them to reach out to the American nuclear weapons labs during the last three years of the USSR. They did so at international conferences and during first-time lab exchanges, long before Washington was prepared for such collaborations.

Scientific cooperation tapped into the most basic interest of scientists and engineers on both sides, namely, the desire to create new knowledge and technologies. Science is fundamentally an interactive, cooperative pursuit, which requires exposing the results of research to review and critique. As a participant in those early exchanges, I can say that the common language of science allowed us to more easily cross cultures and borders. The two sides’ expertise and facilities proved enormously synergistic, resulting in remarkable progress in several areas of science that neither side alone could have produced for some time to come. We found science, unlike politics, to be a unifying force—one that allowed us to build trust through collaboration.

The Pursuit of Fusion

High-energy-density physics was the first—and over the years, most intense—area of cooperation between US and Russian nuclear labs. The field involves studying materials at high densities, extreme pressures, and high temperatures, such as those found in stars and the cores of giant planets. On Earth, these conditions are found in nuclear detonations, the basic physics of which were obviously of great interest to the scientists involved.

Working together, they used VNIIEF explosive magnetic flux compression generators in Russia, VNIIEF generators sent by FedEX from Russia to the United States and charged with US-supplied explosives, and stationary pulsed-power machines at Los Alamos to produce ultra-high electrical currents and magnetic fields that, in turn, produced a wide range of high-energy density environments. This technology provided the capability needed to pursue a unique approach to civilian nuclear fusion, which has tantalized the international physics community for decades with its potential to provide unlimited clean energy. Such energy densities also enabled the scientists to study materials strength under extreme conditions, material behavior under super-strong magnetic fields, and many other problems.

High-energy-density physics is exciting science that helps attract talent, especially young recruits. It represents a non-military outlet for creative weapon scientists to solve big-world problems for the benefit of mankind. It allows scientists to create new knowledge, not just try to prevent potential new nuclear dangers. It also opened the door to cooperation by scientists with complimentary skills. The Russian side excelled in the design of the explosive generators, the American side in instrumentation and diagnostics, allowing the partnership to go beyond what had been achieved before by either side alone. For example, in the mid-1990s VNIIEF scientists produced a world-record magnetic field of 28 million gauss, some 50 million times larger than the magnetic field at the earth’s surface. Moreover, many of the joint high-field experiments were considered the best-instrumented ever. US-Russian collaborations on high-energy-density physics between 1993 and 2013 resulted in over 400 joint publications and presentations, and opened the door for joint work in other areas. 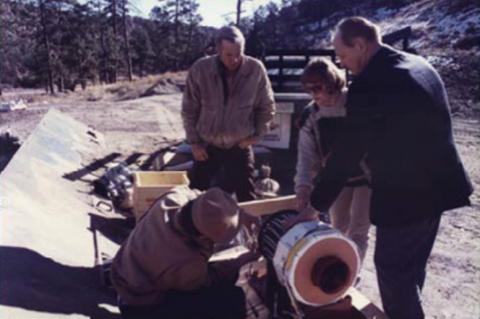 Plutonium science was similarly of great interest to both sides, yet direct collaboration was not established until the late 1990s because of the sensitivity of the subject. Some fundamental aspects of plutonium science were first presented by Americans and Soviets at the Geneva International Conferences on the Peaceful Uses of Atomic Energy in 1955 and 1958. However, the US and Russian results presented in these and subsequent meetings differed dramatically, and the differences were not resolved until we established direct lab-to-lab collaborations.

By the early 1990s, both sides had for decades attempted to understand plutonium, a complex metal that exhibits six solid crystallographic phases at ambient pressure. Its phases are notoriously unstable, affected by temperature, pressure, chemical additions, and time (the latter because of the radioactive decay of plutonium). With little provocation, the metal can change its density by as much as 25 percent. It can be as brittle as glass or as malleable as aluminum; it expands when it solidifies, and its freshly machined surface will tarnish in minutes. It challenges our understanding of chemical bonding in heavy element metals, compounds, and complexes. Indeed, plutonium is the most challenging element.

Several of my Russian counterparts and I have devoted much of our 50 years of scientific endeavor attempting to understand the properties of this enigmatic metal. American and Russian scientists had disagreed for 40 years on how to tame plutonium’s notorious instability, when, in 1998, I began working with Lidia Timofeeva, the preeminent Russian plutonium metallurgist. The end of the Cold War enabled us to talk, challenge each other’s views, and finally understand this element better. Our joint work demonstrated the validity of Russian research finding that a high-temperature phase of plutonium could be retained at room temperature, but not stabilized, by adding small amounts of gallium. (We published the results in a paper called “A Tale of Two Diagrams.”) US-Russian collaboration at more than a dozen plutonium science workshops continued for 15 years.

Computational methods for massively parallel computing became a third important topic of scientific collaboration. During the 1992 US lab directors’ visit to Sarov, I was surprised by VNIIEF’s computational capabilities. Soviet computers were known to be greatly inferior to US supercomputers, the most powerful of which resided at the Los Alamos and Lawrence Livermore laboratories. Yet their three-dimensional simulations of a representative ballistic impact problem were extraordinary. When I marveled at my counterparts’ computing abilities, one of them explained, “since we don’t have the computing power you have, we have to think harder”—and they did. More than one thousand specialists worked in VNIIEF’s Mathematical Department, including some of the most gifted Russian mathematicians and computer scientists.

Because only low-performing, single-central processing unit (CPU) computers were available to Russia’s scientific institutes, in the 1970s VNIIEF began to physically link CPUs and create parallel software algorithms that efficiently used multiple CPUs to greatly accelerate simulations for problems such as hydrodynamics, heat conduction, and radiation transport. They confirmed the efficiency of their parallelization strategies on computers with up to 10 CPUs, the most they could link at the time. They also developed analytical models for predicting the scaling efficiency to arbitrarily large numbers of processors.

During this time, the American labs were just beginning to transition their nuclear simulation codes from powerful single-CPU computers to the massively parallel computers that were becoming commercially available, a transition the Russian side had accomplished years earlier but with fewer and less powerful CPUs. Our collaborations gave Americans access to proven parallelizing algorithms, and gave Russians the ability to evaluate different analytical models for predicting the scaling efficiency to large numbers of processors. This same technology would later prove critical to both US and Russian programs for maintaining their arsenals after nuclear tests were banned.

Allowing the nuclear weapons scientists to move out of the shadow of Cold-War secrecy through scientific collaborations made us realize how much we were alike. It helped build trust, which had a powerful impact on enhancing nuclear security because it allowed us to extend our collaboration into sensitive subject areas, like the safety and security of nuclear weapons and materials. For the nuclear weapons scientists, the progression from science to security was a natural evolution, since we had practiced both from the beginning of our nation’s nuclear programs. It also fulfilled our desire to apply our skills to enhance scientific progress.

Editor’s note: This column is based on materials in Doomed to Cooperate: How American and Russian Scientists Joined Forces to Avert Some of the Greatest Post-Cold War Nuclear Dangers, published by the Los Alamos Historical Society’s Bathtub Row Press in 2016.

Siegfried Hecker is the editor of Doomed to Cooperate: How American and Russian Scientists Joined Forces to Avert Some of the Greatest Post-Cold War Nuclear Dangers, published by the Los Alamos Historical Society in 2016. Hecker is a senior fellow and affiliated faculty member at Stanford University’s Center for International Security and Cooperation (CISAC) and the Freeman Spogli Institute for International Studies, as well as a research professor in the Department of Management Science and Engineering at Stanford. He is director emeritus of the Los Alamos National Laboratory, where he served as director from 1986 to 1997 and as senior fellow until July 2005.