Why Is the Illicit Rhino Horn Trade Escalating?

21 Apr 2017 – In South Africa, domestic trade of rhinoceros horn, forbidden since 2008, is about to become legal again. On April 7 2017, a court effectively overturned the national ban.

This controversial move was welcomed by commercial rhino breeders, who argue that legalising safe, sustainable horn removal from living animals could prevent wild rhino poaching. But animal preservation groups have warned that any legal trade would have the opposite effect.

Poaching has indeed reached new heights this year. On March 7, a rhinoceros was killed in the Thoiry zoo, near Paris, and its main horn was sawed off and stolen. This is the first time a living rhinoceros in a European zoo has been killed for its horn.

That same week, in South Africa, 13 rhinos were found dead in a single day, decimated by poachers. 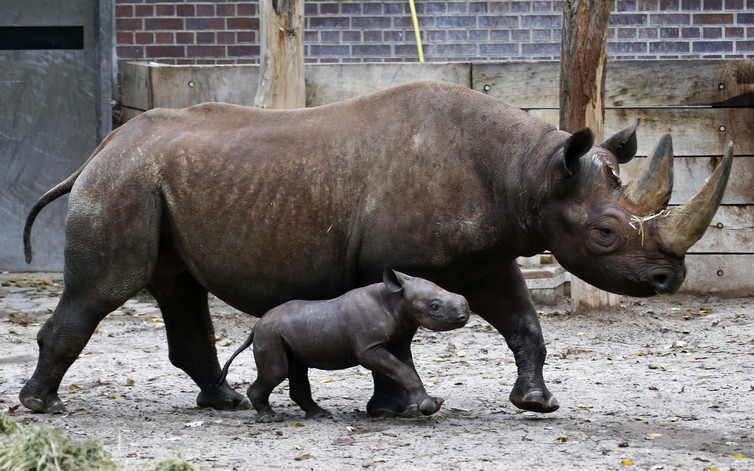 Coveted rhino horns are nothing but keratin for which thousands of animals are killed every year.
Fabrizio Bensch/Reuters

A sharp fall in population

According to 2015 surveys, there are less than 30,000 rhinoceros left on the planet.

Depending on its age and species, an adult rhinoceros can have up to a few kilograms worth of horn, the white rhino being the best endowed (up to 6kgs). Indian and Javan rhinos have only one horn, while the other three species have two.

In 2015, a total of 1,342 white and black rhinos were poached across the continent. Over the last few years, as many (or more) rhinoceros have been killed in South Africa than are naturally born in Kruger National Park and on private farms put together.

Rhino horn, highly valued in China and Vietnam, is used in traditional Asian medicine to treat fevers and cardiovascular disease. More recently, it has been prescribed as a cancer treatment and an aphrodisiac.

While there is no scientific evidence for such medicinal properties, these unfounded beliefs are feeding soaring Asian demand for powdered rhino horn. Prices are skyrocketing: up to US$60,000 a kilo, which is more expensive than gold.

In truth, rhino horn is simply a formation of keratin, a protein found in human nails and animal claws, with a few amino acids and minerals, phosphorus and calcium.

Criminal trade in wild animals constitutes one of the world’s largest illegal markets, according to the UN, along with drugs, counterfeit products and human trafficking. Each year, it affects tens of millions of specimens of animals and plants.

Today, there is clear evidence that organised crime groups have taken over this illicit market. It is among the most highly developed criminal activities confronting the Convention on International Trade in Endangered Species of Wild Fauna and Flora (CITES), a 1977 international agreement signed by 182 countries.

With support from Interpol, Europol, the World Customs Organisation and the United Nations Office on Drugs and Crime (UNODC), CITES applies the ban on rhinoceros-horn trading. Using a system of permits and certificates delivered under special conditions, CITES regulates the market for rhinos and about 35,000 other wild species, categorised into three groups according to the level of protection required.

The white rhino, which is not necessarily threatened with extinction, is an appendix species II for South Africa and Swaziland, meaning the trade there must be controlled in order not to jeopardise the animal’s survival. For all other African range states, the white rhino is listed on appendix I: all trade of this endangered species is forbidden, except for non-commercial purposes such as scientific research.

Appendix III contains species that are protected in at least one country, which has sought assistance in controlling their trade.

Prior to the 2000s, and up until 2007, pressure on consumer countries (Yemen, Korea, Taiwan and China) to stop the rhino trade helped reduce poaching activity, leading to an increase in the African rhino population.

But demand for rhino horn surged in the mid-2000s, chiefly in Vietnam, because of rumours that a government official suffering from cancer went into remission after its use. 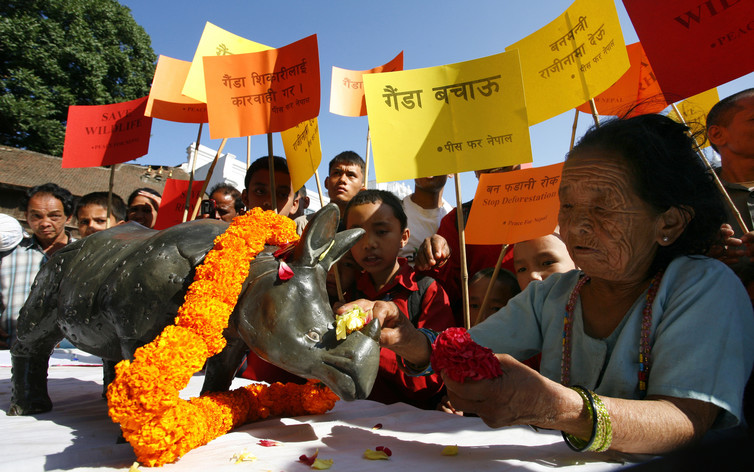 A woman places a garland of flowers on a statue of a rhinoceros during a rally against the killing of the animal in Kathmandu in 2010. Shruti Shrestha/Reuters

Likewise, there is still demand in China and Hong Kong for wealth-signaling objects made of rhino horn, such as libation cups and jewellery.

Where, then, do all these horns come from? According to UNODC, today the major shipments of rhino horn originate primarily in South Africa, followed by Mozambique (where rhinos are gone, but poachers have dipped into stocks at South Africa’s Kruger National Park), Zimbabwe and Kenya.

Both the United Arab Emirates and Europe have served as trading routes. In 2011, the Czech government discovered that some of its citizens were selling trophies they had hunted in South Africa to Vietnamese traders. Some 90 rhino horns were also stolen from museums and auction houses across Europe between January 2011 and June 2012 by the Irish Rathkeale Rovers, a gang since dismantled by Europol.

Why is it often mistakenly believed that rhino horn cures cancer? Find out more at https://t.co/0u9Kb4kLlA #RhinoRumours #MythBusting pic.twitter.com/QRw5QO4dz0

The import of trophies

Though the international rhino horn trade has been forbidden since 1977, CITES recognises some exceptions. It allows, for instance, limited hunting of Appendix II and I species, including, under exceptional circumstances, of endangered white and black rhinoceros

This allowance recognises that well-managed and sustainable hunting is actually consistent with and contributes to conservation efforts. It provides both livelihood opportunities for rural communities and incentives for habitat conservation. And it generates benefits that can be invested in conservation.

It also demonstrates that effective conservation, management and monitoring plans and programs are in place in a number of African range states, meaning that some populations are recovering enough to sustain limited off-takes as trophies.

Though bringing these rhinoceros-hunting trophies (including horns) hunted in South Africa home as personal property is authorised by CITES, their sale is not. Trophies may then be exported to certain African countries under specific conditions (a non-detriment finding by the exporting country is required beforehand). 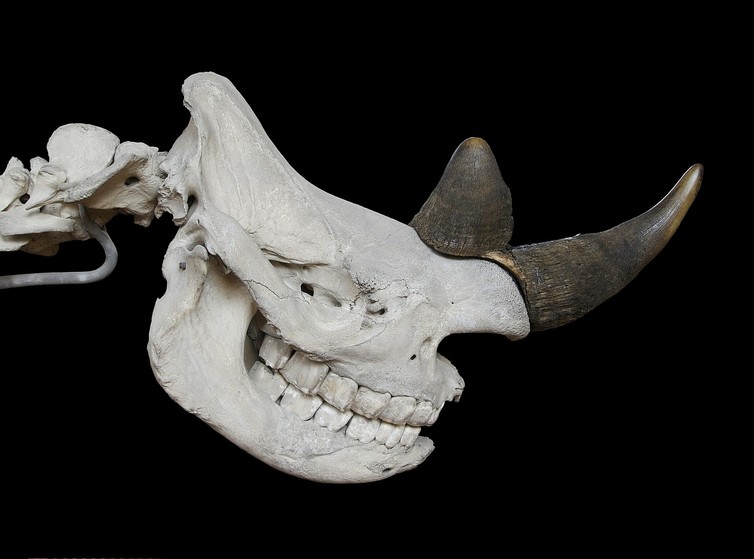 Rhino horns are sought after for social status and medicine, and even trophies are hunted down. Wikilmages/Pixabay

Between 2006 and 2011, 1,344 hunting trophies, including African rhino horns from both species [were legally exported](https://cites.org/sites/default/files/fra/cop/16/prop/F-CoP16-Prop-10.pdf (page 5) as personal property. They mainly came from South Africa, where just under 75 trophy-hunting expeditions were organised prior to 2006, and to a lesser extent, Namibia. Vietnam was the top importing country, ahead of the US, Spain and Russia.

After a sudden upsurge in requests for hunting permits from Vietnam, where it was discovered that rhino horns had been illegally sold, South African authorities in 2012 put an end to permits for Vietnamese nationals.

As demonstrated in last week’s South African court case overturning the ban on the rhino trade, some countries are showing signs of restlessness under the current CITES regime.

Swaziland, for instance, would also like to see change. During the last international meeting of CITES signatory parties in late September 2016, this small country submitted a proposal to allow limited regulated trade in white rhino horn. It has a small population of about 75 white rhinos living protected in parks.

Between 1988 and 1992, an intense period of poaching wiped out 80% of Swaziland’s rhino population. This left it with a large stock of horns that it would like to be able to sell. The proposition was voted down by the majority of CITES countries.

The 7 big decisions made at the @CITES global #wildlife summit #CoP17 https://t.co/QLof9dPuE8 via @guardianeco pic.twitter.com/0JdlxwjbGp

Now, South Africa’s legal U-turn could open a new avenues for the rhino trade. Most South African farmers believe that the ban only encourages poaching and that they themselves could fulfil Asian demand by providing horns from living animals.

Farmers know how to cut the horn with a saw so that it will grow back, a painless procedure for the animal that is put under anaesthetic for around 15 minutes. Protecting rhinos on ranches costs them millions of dollars as they face raids from poachers.

The current poaching crisis differs from a prior crisis in the 1990s in two ways. First, the illegal rhino horn trade has been taken over by organised crime groups because it is less severely punished than other illegal trades (although this is changing thanks to new legislation introduced in most countries).

Then there’s the skyrocketing traffic to East Asia, which reveals the region’s ever-growing demand of miscellaneous African animal products for traditional Asian medicine, from rhino horns to elephant ivory and, now, the skin of domestic African donkeys

Conservation groups should remain resolute at this critical juncture.

National, regional and sub-regional networks have intensified their fight against this transnational criminal market and are now being coordinated by the International Consortium on Combating Wildlife Crim, which brings together CITES with various anti-fraud organisations. Thus far, their battle has produced very good results.

It is now up to Asian authorities to raise awareness and discourage the use of rhino horn. China has already taken steps in this direction and, in November 2016, Vietnamese authorities burnt a stock of rhino horn.

Still, some say it will take a generation to change attitudes. Can the planet’s remaining 30,000 rhinoceros survive until then? 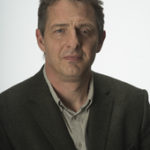 Translated from the French by Alice Heathwood for Fast for Word.