27 Apr 2017 – Anzac Day celebrations on April 25 were used by the Australian political and media establishment to reaffirm its commitment to US-led wars and military preparations around the world, and to try to drown out widespread anti-war sentiment among working people.

The annual public holiday, which marks the first day of the disastrous 1915 landing of Australian, New Zealand, French and British troops at Gallipoli cove in Turkey, has been at the centre of a four-year government-funded celebration of the centenary of World War I, aimed at saturating the population with militarist propaganda.

Liberal-National Prime Minister Malcolm Turnbull underscored the connection between this campaign and the current war drive of Australian and American imperialism, spending Monday in Iraq, and participating in Anzac Day celebrations on Tuesday in Afghanistan.

In a Facebook post, Turnbull likened current soldiers to those sent to the two world wars of the last century, declaring: “On behalf of all Australians, thank you, to all those at home and abroad today, as your ancestors did before you, in our uniform, under our flag, put their lives on the line to keep us free.”

Turnbull gave an open-ended commitment of Australia’s continuing participation in the 15-year neo-colonial occupation of Afghanistan and the new US wars in Syria and Iraq, aimed at securing US hegemony over Central Asia and the Middle East. “There is no doubt that in both theatres, there is going to need to be a long-term commitment,” he stated on Tuesday. Turnbull foreshadowed additional Australian troop deployments.

Labor Party leader Bill Shorten, who took part in Anzac Day ceremonies in Papua New Guinea, likewise tied the militarist celebration to current wars. He asserted: “We are more confident of our place in the world and our ability to speak for our interests. Yet in an age when so many old loyalties and certainties are fading, the power of the Anzac legend has not grown old.”

On the Australian Broadcasting Corporation’s Radio National, Shorten restated Labor’s support for the bellicose US stance against North Korea, which has included threats of preemptive military strikes that could trigger a broader conflict.

The Korean Peninsula is one of a series of flashpoints in the Asia-Pacific and internationally stoked by a dramatic expansion of US militarism. Some TV commentators on Anzac Day obliquely pointed to the dangers of world war, referring to “eerie parallels” with the situation 100 years ago.

In line with this focus, serving Australian troops were prominently featured in Anzac Day marches across the country.

The events with the highest attendances were those near military bases and training facilities, including Perth in Western Australia, Townsville in Queensland and Darwin in the Northern Territory.

In Darwin, US marines participated in the march and were hailed by various speakers. They are among 1,250 American troops stationed nearby, under an annual rotation established in 2011 by the Gillard Labor government, as part of the US-led preparations for conflict with China. 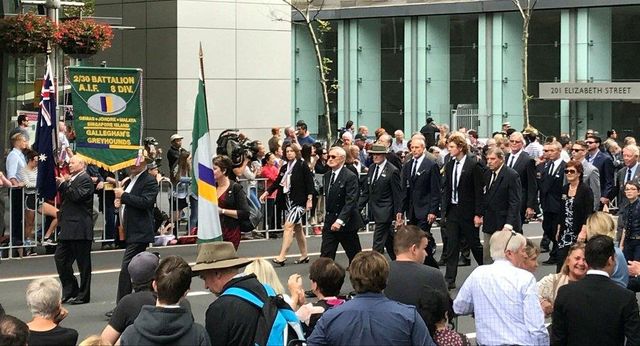 As in previous years, numbers of school children were mobilised throughout the country. Attendances overall, however, were substantially down on past years. An estimated 30,000 watched the march in Melbourne, compared to 45,000 last year. Fewer than 20,000 attended the main march in Sydney, down from over 30,000 two years ago. Some 5,000 took part in Adelaide, compared with 20,000 in 2015.

The fall in attendances reflects the growing disconnect between the nationalistic celebration of the centenary of World War I, and the sentiments of ordinary people who are becoming increasingly alarmed by international developments.

To fund a barrage of television programs, books, events and new monuments glorifying militarism, the federal government allocated over $330 million to the centenary campaign, while state governments contributed $130 million and corporations $90 million. The combined figure of over half a billion dollars is more than that being spent on war commemorations by all the other former WWI combatants combined.

The aim of this campaign—to promote patriotism and suppress social antagonisms—was underscored by the witch-hunt of ABC commentator Yassmin Abdel-Magied for a Facebook post which featured the Anzac refrain, “Lest we forget,” in a reference to Australia’s persecution of refugees, the war in Syria and the oppression of the Palestinians. Senior government and Labor ministers denounced Abdel-Magied, with some calling for the public broadcaster to sack her.

The official centenary celebrations are also aimed at burying any mention of the mass opposition to World War I that developed in Australia, as in other countries.

The year 1917 saw the highest number of Australian casualties in the war. Two battles at Bullecourt in France claimed 10,000 Australian casualties in less than two months between April and May. Over 22,000 were killed and tens of thousands wounded during 1917. The losses were a product of the stalemate of trench warfare, in which allied and German commanders sent thousands of soldiers to their deaths to gain metres of ground.

The catastrophic losses, following on from massive casualties at Gallipoli in 1915 and the Western Front in 1916, intensified opposition to the war. In October 1916, a plebiscite called by Prime Minister Billy Hughes to sanction military conscription, after a fall in voluntary enlistment of more than 60 percent, was defeated. Anti-war marches and protests were held in the lead-up to the vote, with 100,000 attending a Sydney protest in August 1916, comprising one-sixth of the city’s population.

By 1917 there was a growing movement of the working class, culminating in a six-week strike by over 100,000 workers in New South Wales and Victoria, beginning in August. Government authorities viciously witch-hunted members of the anti-war Industrial Workers of the World and other socialists, while presenting the unrest as a product of “foreign agitators.” A second conscription referendum was defeated in December 1917.

This upheaval was part of a global movement of the working class against the war and the social deprivation that it produced, finding its high point in two revolutions in Russia, resulting in the seizure of power by the working class in October 1917.

WSWS reporters spoke to workers on Tuesday [25 Apr] about the glorification of militarism and the dangers of a new war.

Sajeev, a software engineer originally from Malaysia attended the Sydney march out of curiosity.

“I think America is the big problem,” he said. “All the disputes with China or North Korea or even Russia are along their borders. The main reason North Korea is trying to get nuclear weapons is to deter powers like the US from coming and doing whatever they want.

“But that just raises the stakes and the potential for a really unstable authoritarian government like North Korea to be pushed to the brink of a mistake. It just takes one incident and it’s something you can’t reverse. One bomb is enough to wipe out many people.

“There are so many reasons people are sent to war but a lot of them is because of influence and power. The wars in the Middle East are about energy resources and control of important areas.”

Asked if he had noticed a broader glorification of war, Sajeev said: “Yes, especially in the past few years. During the Iraq war, there was a bit more protests than now. I don’t think that’s because most people are pro-war. But there is a more nationalism now because of fear-mongering in the media. As economic conditions get worse, people try to find a scapegoat.”

Interviewed in southwestern Sydney, Faheem, who is originally from Pakistan, said: “There’s an extreme danger of war. Everybody would die. It’s going to be a nuclear war, not like war used to be, where the people fought with swords or guns.”

Referring to Washington’s use of the largest bomb since World War II this month in Afghanistan, Faheen commented: “The dropping of the bomb on the border of Pakistan is very bad, there’s a big population there.

“A normal person like me, he doesn’t want to go to war. In Pakistan, they spend three times more on the military than on other services. People are starving and they’re spending on the military.”

Paul, a retiree, attended the march in Melbourne. “You can see clouds of war building,” he said. “It’s like it was in the past, more stupidity. People have forgotten what war is about. Instead of treading the road of peace, they just want to go out and thump each other.

“When Donald Trump was voted in, my son, who is 21, was quite upset because it was going to be a bad thing. It only takes one bad move. I think behind the drive to war is greed. Either we try for peace or drop the biggest bomb, like in Afghanistan. Is that a wise path or are they repeating history?”