State Of Emergency in Yemen’s Sanaa over Cholera Crisis

More than 184 Yemenis have been killed by a cholera epidemic that is gripping the Houthi-controlled Sanaa. 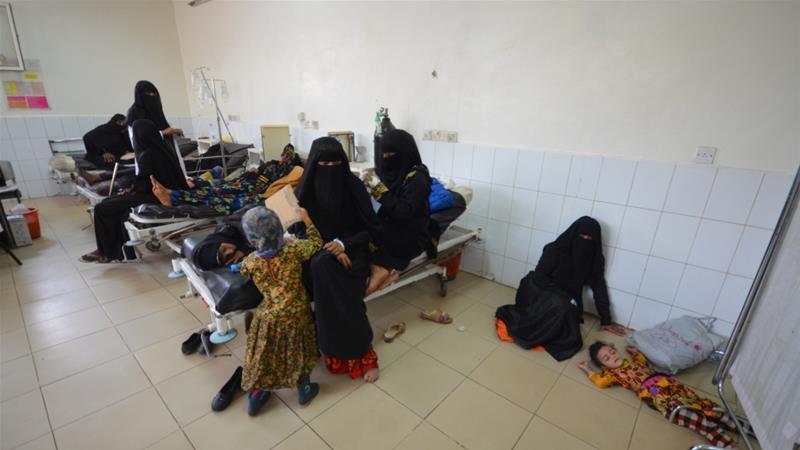 More 115 people have died due to the ongoing cholera crisis in Sanaa. [Abduljabbar Zeyad/Reuters]

15 May 2017 – A state of emergency has been declared in Yemen’s opposition-held capital, Sanaa, according to the local Saba news agency, after a cholera outbreak killed scores of people over the past two weeks.

The health ministry of the Houthi government announced the measure late on Sunday, saying that “the number of casualties surpassed the normal rates, exceeding the capacity of the health system, which has become unable to contain this unprecedented health and environmental disaster”.

The International Committee of the Red Cross (ICRC) announced at a press conference in Aden on Monday that the cholera outbreak had killed at least 184 people since April 27.

More than 11,000 suspected cases of the waterborne disease were reported in the same period in 14 governorates across Yemen, according to Dominik Stillhart, ICRC’s director of operations.

The latest figure is a marked increase from the 2,300 cases in 10 governorates announced last week.

“Today, Yemen is facing a major health crisis and it’s getting worse day by day,” said Mohammed Al-Asaadi, spokesperson for UNICEF, the UN’s agency for children.

“The cholera outbreak has left more than 180 dead and we are worried about what will happen next.”

This is the second outbreak of cholera in less than a year in war-torn Yemen, the Arab world’s poorest country in the grip of a war between government forces, which are backed by an Arab coalition, and Houthi fighters.

More than 10,000 people have been killed and millions displaced in more than two years of war, which has also destroyed much of the country’s infrastructure.

Only a few medical facilities are still functioning and two-thirds of the population are without access to safe drinking water, the UN has said.

“What is happening today exceeds the capabilities of any healthy health system, so how can we [cope] when we are in these difficult and complicated conditions,” Saba quoted Mohammed Salem bin Hafeedh, Yemen’s health minister, as saying.

The healthy ministry – after holding talks in Sanaa with Jamie McGoldrick, the UN humanitarian coordinator, and other international officials – called on humanitarian organisations and aid donors to help it avert an “unprecedented disaster”.

Cholera is an acute diarrhoeal disease that is transmitted through contaminated drinking water. It can be fatal within hours if left untreated.

Most sufferers exhibit mild symptoms that can be treated with oral rehydration solution, but the disease can kill within hours in severe cases if not treated with intravenous fluids and antibiotics.

In December, UNICEF said at least one child dies every 10 minutes in Yemen because of malnutrition, diarrhoea and respiratory-tract infections.

Sanaa has been worst hit, followed by the surrounding province of Amanat al-Semah, WHO data has shown. Cases have also been reported in other major cities including Hodeidah, Taiz and Aden.

About 17 million of Yemen’s 26 million people lack sufficient food and at least three million malnourished children are in “grave peril”, the UN has also said.

In a statement on Monday, Rajat Madhok, UNICEF’s communication officer in Yemen, said the agency “is increasing its support to the incubators ward in Maabar and Al-Thawra hospital.

“It is also financially supporting with salaries for certain medical staff and provides equipment, medication, oxygen and treatment for premature births and newborns that suffer from complications”.

UNICEF in Yemen provides services in health facilities and through mobile teams, outreach campaigns and community volunteers in hard-to-reach locations.

“With the imminent collapse of the public health system, UNICEF is taking on as much of the burden as possible, procuring essential drugs and vaccines, and covering basic operations costs such as electricity and fuel,” Madhok said.