The Balfour Declaration: A Century of Jewish Power 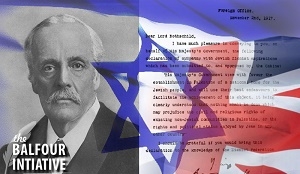 19 May 2017 – This year, Palestinians and their supporters mark the 100th anniversary of The Balfour Declaration, a written statement from the United Kingdom’s Foreign Secretary, Arthur James Balfour, to Walter Rothschild, a leader of the British Jewish community, in favour of the establishment of a Jewish national home in Palestine.

The Balfour Declaration provides solid evidence that the dominance of Jewish political lobbies in world affairs is not really a ‘new development.’ In 1917, at the peak of WWI, it was up to a few Jewish financiers and lobbyists to decide the fate of countries, continents and the outcome of global conflicts.

In his invaluable book, The Pity of it All, Israeli historian Amos Elon suggests that the 1917 Balfour Declaration was at least partially motivated by the British government’s desire to win the support of pro-German American Jews so that they would help to pull the USA into the war.

Elon argues that at the beginning of the war, German-American Jewish financiers sided with the Germans and would reject any possible alliance between the USA and England. “Jacob H. Schiff, head of Kuhn, Loeb—at the time the largest private bank in the United States after J. P. Morgan—declared that he could no more disavow his loyalty to Germany than he could renounce his own parents. Schiff prayed for Germany’s victory. In a statement to the New York Times on November 22, 1914, he charged the British and the French with attempting to destroy Germany for reasons of trade.”1

And German-American Jews were not alone in the Jewish community.  Russian-American Jews also supported Germany in the war. “Eastern European Jews in the United States, repelled by the anti-Semitism of czarist Russia, were equally pro-German. In Russia itself, Jews of the Pale greeted German troops advancing into Poland, Byelorussia, and the Ukraine as liberators. In a sense, they were.”2

According to Elon, the Brits encountered an American Jewish problem. “The British government took these developments very seriously. In a fit of paranoia, the British ambassador in Washington even suspected the existence of a veritable German Jewish conspiracy in the United States directed at Britain.”2

Elon’s conclusion is clear. “The 1917 Balfour Declaration, calling for the establishment of a Jewish national home in Palestine, was at least partly motivated by the British government’s desire to win support among pro-German American Jews.”2

Elon’s reading of the circumstances that led to the Balfour Declaration is pretty much the same as Benjamin Freedman’s in his notorious 1961 address.

Freedman states that Zionists offered Britain their support in pulling the USA into the war in return for a British commitment to make Palestine into a Jewish homeland in the future. Freedman believed that Germany’s post-WW I animosity towards Jews stemmed from what they regarded as the betrayal and complicity of German-Jewish financiers in their defeat.

100 years after the Balfour Declaration, Palestinian solidarity enthusiasts choose to avoid discussion on the global Judeo-centric politics that led to the declaration, even though it was arguably the most significant event that shaped the Middle East and present day Palestinian reality. This reluctance suggests that the solidarity movement is itself an occupied territory. Once again, we observe that the discourse of the oppressed is controlled by the sensitivities of the oppressor.