The Decline of the West Revisited 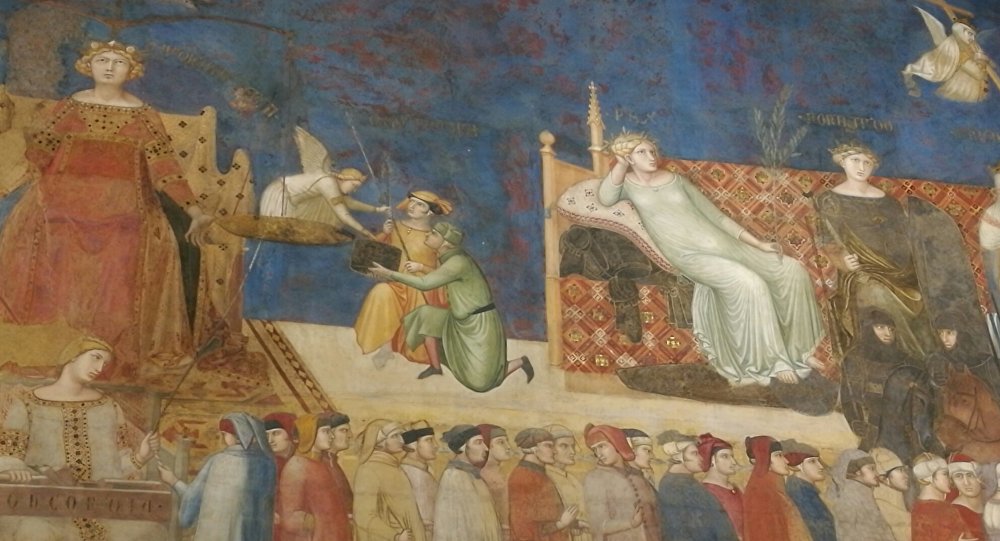 Europa, in Greek mythology, was a Phoenician princess abducted by Zeus and carried off to Crete. In time, Europe was meant to designate the western extreme of Eurasia. Europe, essentially, was the quite provincial Western seed that then sprouted an octopus: the global West.

11 May 2017 – Over five centuries after the Age of Discovery, we all know a long historical cycle is ending. The Decline of the West is shorthand for a tangle of immense complexity – directly proportional to the ascent of the century of Eurasia integration, driven by China’s New Silk Roads.

Every time I dig deeper into the Decline of the West, I have to go back to the roots. And that means – echoes of Stendhal, Keats, Nietzsche — a Journey to Italy. I had recently engaged in an extended dialogue with Machiavelli in Florence. This time, the French presidential election was looming – widely billed as the “civilized” West facing a crucial crossroads.

I set out after reading Decadence, by the explosive philosopher and founder of the Popular University of Caen, Michel Onfray. His thesis is devastating; Judeo-Christian civilization, thus the West, was built on a fiction, “that of a Jesus never having an existence other than allegorical, metaphorical, symbolic and mythological.” Over a thousand years of art history had conferred him “the body of a white man, with blond hair and a thin beard’ (where better to examine it than through Renaissance art?) And “nothing that constitutes this emblematic portrait, finds justification in a single verse of the New Testament.”

Thus, Onfray writes, “our whole civilization is based on the attempt to give a body to this being that had only a conceptual existence.” Jesus of Nazareth, “who did not exist historically,” becomes the “Christ Pantocrator” (meaning, in Greek, “ruler of all”), “crystallizing under his name almost two thousand years of a Western history saturated by him.”

St. Paul laughed out of the agora

So here was the road map for the journey: Christianity as the official history of the West – in an almost perpetual clash with ancient Greek philosophy. And then once more to retrace the steps of how humanism – and the Enlightenment – briefly lifted the human spirit until the slaughterhouse of the 20th century led the way to the current, end of ideology, Age of Anger.

I started in Turin over dinner with the great Gianni Vattimo, one of the last, towering European intellectuals. Frail but still sharp, Vattimo is like a living embodiment of a dying world. I paid my ritual homage to Nietzsche (“there are no facts, only interpretations”), a fierce admirer of the pre-Socratics, at the house where he wrote Ecce Homo before succumbing to folly. In Milan, I saw the Silk Road in reverse at Porta Nuova as the city increasingly reinforces its myriad links with China.

As I moved south towards Florence, I could not stop thinking – in a Nietzschean mode – about St. Paul, among his countless pilgrimages to Ephesus, Antioch, Corinth, Pergamon, Tyr, meeting Pythagoreans, Platonics, Epicureans, Stoics, Cynics in agoras where they taught their art de vivre according to reason, always mingling with the local merchants, weavers, fishermen.

Paul hated philosophers. The New Testament refers to Paul at the agora in Athens, which once harbored the prized dialogues between Socrates and Plato, Plato and Aristotle, and many a Neoplatonist debate. Paul was horrified by this city full of “idols.” He was preaching the “resurrection of the flesh,” the abolition of paganism and a multiplicity of tolerant gods, replaced by a one and only, intolerant God. Talk about delirium; that could not but send partisans of Zeno or Epicurus into roars of laughter.

Then there was Helen, mother of emperor Constantine, turning the Cross into a major political business. Helen invented not only the pilgrimage to the Holy Land but also the Crusades – that extended historical instance of Christian jihad.

Constantine, a cynical, opportunist strategist, understood that to halt the political fragmentation of the Roman Empire and domesticate popular anger the best way was to adopt a minor, quirky Jewish sect whereby the poor must remain poor (it’s God’s will) and power exists because God conferred it to those who possess it (parallels to American exceptionalism, anyone?)

When, in May 22, 337 Constantine converts himself to Christianity, he converts the whole empire; he kills Rome as the center of the world (we should not forget that Augustus, founder of the Roman Empire, was a devout disciple of pagan Apollo); he creates Judeo-Christian civilization; and he opens the way to what will become the West.

Onfray synthesizes it; Rome lived for 11 centuries. But then “the She-wolf was eaten by the Lamb”; that was “the inaugural feast of our Judeo-Christian civilization.”

Cynics – and Epicureans — privilege other modes of feasting. By then I had reached Tuscany, armed with a pocket edition of the Letters of Epicurus. Ahead was the sublime countryside in Val d’Orcia, worthy of a Renaissance masterpiece; Bacchus springing up from the perfect bottle of Brunello at the fortress in Montalcino; the simple magic of water and flour savored in a pici from Siena.

And as a sideshow, in a revised pagan Rome register, I was catching up with remembrances of La Dolce Vita. How Luchino Visconti ruled Cineccitta. How Antonioni pictured the eclipse of sentiment by transposing his life with Monica Vitti to the screen. How Fellini was arrested by the NYPD in the black Cadillac of his producer Dino de Laurentiis just to be honored by the cops as a living God.

Epicurus teaches in his Letters a radical antinomy to Christianity. All that exists is nothing but atoms that fall on the void (so no more resurrection of the flesh); serenity is obtained by the knowledge of atomist physics (thus no government of men under the fear of God); and most subversively, pleasure is the origin of good, residing in the satisfaction of natural and necessary desires (thus no Christian asceticism, penitence, original sin — and interminable expiation of the sin).

No wonder, for centuries, Christianity had to suffocate this hedonist, sensualist philosophy. Three Epicurus letters survived the Christian Inquisitor because they were included in a 3rd-century volume by philosophy historian Diogenes Laertius. And then Epicureanism reappeared in the 7415 verses of Lucretius’ De Rerum Natura. What an extraordinary historical twist; the Christian destruction of the work by Epicurus the Greek was to a great extent saved by an immense poem written by Lucretius the Roman.

Poggio Bracciolini traveled all over Europe as much as Petrarca, who had searched for Greek and Roman manuscripts since the 1330s. When Poggio rediscovers Lucretius, he builds intellectual Europe; the vision of the world that puts man at the center where, after a millennium, Christianity had installed the Christ. Rhetoric, history, poetry, philosophy, letters, architecture, all those disciplines that have shone before Christ – and then nourished those ghastly Christian auto-da-fés – are finally set free.

Nowhere better than Florence to retrace the steps of humanists who created Europe without Christianity. Take Niccolo Niccoli; when he dies in 1437, he had amassed 800 manuscripts, the most spectacular collection in Florence. And he single-handedly invents the modern concept of the public library, where you can borrow any book you want.

And nowhere better than in Tuscany may we revive how Christian mythology was sold to the masses — in contrast with eulogies of Greek paganism. The aesthetic perfection of Donatello’s spectacularly insolent, adolescent David, Botticelli’s Neoplatonist Spring, or Giambologna’s Mercury shines as much as Leonardo’s Annunciation and most of all the unfinished Adoration of the Magi, meticulously restored with state of the art technology.

And then we are knocked out by a breathless Franciscan masterpiece; the Legend of the True Cross by Piero Della Francesca at the St. Francis Basilica in Arezzo.

Onfray frames it beautifully: ““Constantine and his followers made ancient thought leave through the door, Petrarca, Niccoli and Poggio made it re-enter by the window.”

St. Francis absolutely venerated the symbol of the Passion. The whole saga is pictured in a sort of Renaissance cinemascope 4K series of frescoes – also meticulously restored. Piero based them on legends related to the wood of the cross where Christ was crucified, included in the Apocryphal Gospels originated in Asia and known as the Golden Legend.

The symbolism is unmistakable; God always intervenes; He is the guarantor of redemption; and in the end, the forces of Evil will be defeated.

No wonder the Golden Legend enjoyed an immense success during the Crusades; one of the chapters, the profanation of the Holy Land by infidels, was used as effective propaganda for military conquest.

But Piero, with his unmatched formal rigor, transcends it, turns it into an epic, a “less is more” modernist aesthetic orgasm even as the message remains a myth; Piero’s Annunciation – arguably the highlight of the fresco cycle — symbolizes a rite of passage for man; condemned by the original sin, from Adam to Christ, he finally enters the age of Christianity, where faith in salvation, possible by the sacrifice of the Redemptor, signals hope.

Yet way over a century before Piero, the Ambrogio Lorenzetti cycle of frescoes painted between 1338 and 1339 at the Palazzo Pubblico in Siena was hinting at something way more revolutionary; the triumph of sensible, human – not divine — politics.

This meticulous intervention of man building an ethic-aesthetic conception of civil society still blows our minds away. In his Allegory of Good Government, Lorenzetti depicted nothing less than the effects of good government in a sort of utopia of reality; a solar, serene, laborious medieval city in a symbiotic relationship with a productive countryside. Something that the West has lost – perhaps forever.

Throughout history, the West was enshrined as a fable; imagined to death; celebrated as the fountain of civilization; deeply religious, sentimental, paragon of secularism, imperial, colonial, political. It’s easy to forget that for those Christians “discovering” the new world, the West was not the antithesis of the East but a Divine successor. Now the pendulum swings back.

On the way back to Paris, through Epicurean Bologna – home of the definitive tortellini – I had time to revive a last modernist yell, via a bilingual pocket edition of Pound’s Pisan Cantos, a sort of pre-requiem for the Decline of the West. As a lone ant from a broken ant-hill/ from the wreckage of Europe, ego scriptor.

Pull down thy vanity, repeated as an incantation in canto LXXXI, reads like a poignant message to two millennia of Christianity. And then, riding on the TGV, I saw the new French pharaoh, Ramses Macron, studiously and cinematically walking towards his pyramid at the Louvre to celebrate yet one more Western triumph towards a Brave New Neoliberal World.