UN Peacekeepers: Keeping the Peace or Preventing It?

The UN peacekeepers’ capacity to commit rape with impunity undermines prospects for sustainable peace around the world. 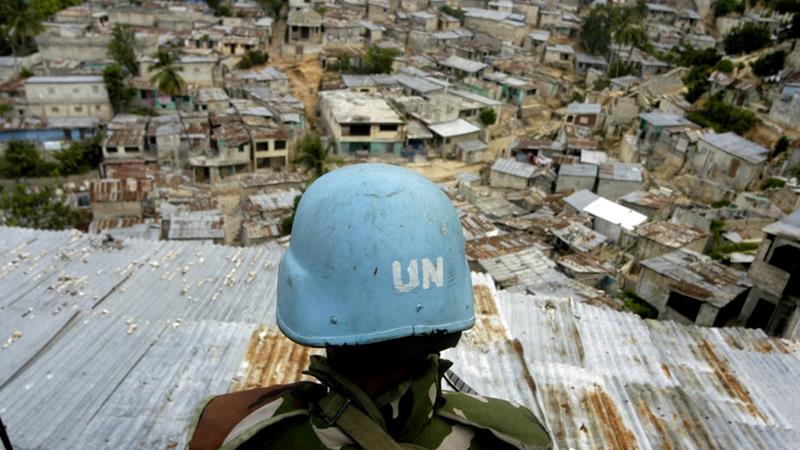 In 2007, more than 100 Sri Lankan peacekeeping troops were sent back to their home country from Haiti in disgrace as a result of sexual abuse allegations, write Gowrinathan and Cronin-Furman [Reuters]

2 May 2017 – Last month’s Associated Press (AP) report on the estimated 2,000 allegations of sexual abuse and exploitation by peacekeepers and United Nations personnel around the world wasn’t precisely breaking news. Allegations of serious misconduct directed by peacekeeping troops have dogged the UN for years. But the AP report contained several testimonies from the victims of Sri Lankan peacekeepers, who sexually abused and raped children during the UN Stabilisation Mission in Haiti (MINUSTAH), and these searing testimonies once again highlighted the cost of impunity for sexual violence by UN personnel.

Beyond a blemish on the reputation of the UN, these violations fuel a culture of violence that undermines the potential for sustainable peace.

Within the organisation, sexual violence by peacekeepers is treated with condemnation and, at most, re-location. The UN has no power to prosecute them for their crimes and the Status of Forces agreements (SOFA) that govern UN missions insulate peacekeepers from the criminal jurisdiction of the host country. As a result, the sole responsibility to provide accountability for the crimes of UN peacekeepers rests with their own governments.

In 2007, more than 100 Sri Lankan peacekeeping troops were sent back to their home country from Haiti in disgrace as a result of sexual abuse allegations. The Sri Lankan government promised to investigate and prosecute the guilty but it has not done so. While the Ministry of Defence has stated that 20 members of the contingent were subjected to disciplinary sanctions in 2009, no one has been prosecuted. And Sri Lankan troops have continued to deploy with UN peacekeeping missions in Haiti and elsewhere.

The focus on the appalling failure to prosecute these soldiers for their crimes obscures the fact that the issue is not just criminal violence on an individual level, but rather it emerges from entrenched political cultures that, intentionally, result in a collective failure to protect vulnerable people.

“Conflict-related sexual violence” is a major thematic focus for the UN. Yet, despite clearly qualifying under the requirement that it be “directly or indirectly linked (temporally, geographically or causally) to a conflict”, the sexual violence of peacekeepers is rarely understood to be tied to conflict dynamics. But peacekeepers are explicitly political actors.

While peacekeeping missions are newly created forces, they are made up of national contingents that have been socialised in very particular rules of engagement, rooted in the particular underlying political agendas of their home country.

The Sri Lankan troops that deployed to Haiti were members of a military apparatus that had been fighting a brutal civil war for over two decades and was implicated in widespread and systematic human rights abuses. Arriving in Haiti, the Sri Lankan contingent brought with them a deeply entrenched culture of impunity for crimes against civilians.

Rape, in particular, became endemic as a form of political repression, and reprisal, over the course of the conflict between the Sri Lankan military and the Liberation Tigers of Tamil Eelam (LTTE). It was almost never prosecuted. Despite frequent reports of sexual violence during combat operations, and the routine commission of custodial rape against both women and men, Sri Lankan military personnel have been convicted for exactly one instance of wartime sexual violence: the 1996 gang rape and murder of Tamil schoolgirl Krishanthi Kumaraswamy. The default response of successive Sri Lankan regimes to allegations of military rape, and indeed all state-perpetrated human rights abuses, has been denial and, when pressed, window-dressing inquiries that lead nowhere.

In the final phases of the war in 2009, rights groups reported widespread sexual violence (rape, forced abortions, forced prostitution) of vulnerable populations amongst other alleged war crimes. While a few high-profile cases were covered in the local media, none resulted in convictions. Sri Lankan military forces, from rank and file cadre up to high-level commanders, are guaranteed protection from prosecution.

Carrying with them past crimes and heavy-handed tactics, peacekeepers are hardly the “neutral” incoming forces they are construed as. As they land, they also occupy a particular political space in their host country. Their function is to ensure stability and prevent the resurgence of violence; necessarily a status quo enforcing role. They are therefore tied, especially in the minds of aggrieved or marginalised populations, to the state’s political agenda. This means that the violence of peacekeepers is, in some senses, the violence of the state.

Like Sri Lanka, Haiti’s civil strife over the past three decades has been marked by state-sanctioned rape, forced disappearances, and massacres of civilians – largely to quell political dissent and resistance. MINUSTAH bases, like those the Haitian children were reported as being forced into, are carefully placed in neighbourhoods whose resident have lived their entire lives under the shadow of state violence. To civilians in this area, rape at the hands of armed men is inevitable. In 2007, a Haitian woman interviewed confirmed the depth of this militarised culture of violence. “(There is) no difference between the police and the gangs. They all have guns and they can do whatever they want,” she said.

If Sri Lanka’s participation in UN peacekeeping has proven anything, it is that abusive military cultures survive transplantation to new environments.

State-perpetrated sexual violence places all its victims, but particularly women, in positions of extreme marginalisation. These victims often find themselves ostracised by their communities and at an increased risk of retribution by military forces. An under-recognised result of this violence is its impact on women’s political perceptions in ways that encourage identification with extremist, or violent, political movements.

In Haiti, before the arrival of the peacekeepers, the prevalence of rape had already created an urgent need for self-protection, and a deep disillusionment with the state, leading to a significant increase in women joining the armed gangs and vigilante groups driving pervasive violence. The sexual violence of peacekeepers, tied to both the protection failures and the violence of the state, has only exacerbated these dynamics. Rape by state military forces, as a political act, will always have a political impact. Rape by UN peacekeepers, often the last resort for protection, will leave in its wake even more willing recruits for armed groups.

If peacekeepers carry their politics with them to their host country, they don’t leave them there. As successive waves of Sri Lankan peacekeepers have returned home from Haiti, they have re-engaged in the ethnic conflict; first in combat roles, and then, following the end of the war in 2009, as part of the occupying force in northeast Sri Lanka. Several of the peacekeeping contingent’s leadership went on to positions of high authority in the Sri Lankan military, including brigade and division commander, and director of military intelligence.

These individuals have presided over a heavily militarised former conflict zone in which rape and sexual exploitation of vulnerable Tamil women, similar to that inflicted on the Haitian population, have been common. This violence undermines prospects for a lasting peace. From our post-conflict research in Sri Lanka, several interviewees noted that, “when people in the community think of the situation now of Tamil women, they think we have to resurrect the LTTE”.

Driving a resurgence of violence

Just a few weeks before the Sri Lankan troops were sent home in 2007, the contingent’s former second-in-command, Colonel Mahinda Weerasooriya, told a domestic newspaper that by participating in UN peacekeeping operations: “We have proven that the Sri Lankan army is not an army that violates human rights and we have proven that we are a well-disciplined army”.

Yet, if Sri Lanka’s participation in UN peacekeeping has proven anything, it is that abusive military cultures survive transplantation to new environments. Soldiers who exploit and abuse vulnerable populations at home will do so abroad as well – undermining the prospects for peace in both spaces. Peacekeeper violence has political impacts far beyond the creation of new victims.

While it is incontrovertible that peacekeepers who abuse civilian populations should be prosecuted for their crimes, these individual trials are not enough. Peacekeeper violence should be treated with the same seriousness as other types of conflict-related sexual violence. National contingents should be more thoroughly vetted before deployment, and stronger monitoring and disciplinary sanctions should be imposed to prevent and punish violations on the ground. Without these comprehensive measures, UN peacekeeping forces will not only fail in their mission to create the conditions for lasting peace, they will be one of the driving forces behind a resurgence of violence – wherever they go.

Dr. Nimmi Gowrinathan is a professor at the Colin Powell School for Civic and Global Leadership, where she is the Director of the Politics of Sexual Violence Initiative. Her work focuses on links between rape and radicalisation for marginalised women. She is the creator of The Female Fighter Series at Guernica Magazine, and has written for Foreign Affairs, Vice News, and Harper’s Magazine. More on her work can be found at www.deviarchy.com.

Dr Kate Cronin-Furman is human rights lawyer and political scientist. She is currently a postdoctoral fellow in the International Security Program at the Harvard Kennedy School’s Belfer Center for Science and International Affairs. Her work has appeared in the International Journal of Transitional Justice, The Washington Post’s Monkey Cage blog, The Atlantic, The National Interest, and The New York Times.