It is a thousand times easier For you
To pass an elephant through the needle’s eye
To catch fried fish in the Milky Way
To plow the sea
To teach the alligator speech, a thousand times easier
Than smothering with your oppression
The spark of an idea
Of forcing us to deviate
A single step
From our chosen march.
Like twenty impossibles
We shall remain in Lydda, Ramlah, and Galilee.

Here upon your chests
We shall remain
Like the glass and the cactus
In your throats
A fiery whirlwind
In your eyes.

Here we shall remain
A wall on your chests.
We wash dishes in the hotels
And serve drinks to the masters.
We mop the floors in the dark kitchens
To extract a piece of bread
From your blue teeth
For the little ones.

Here, we shall remain
A wall on your chests.
We starve,
Go naked,
Sing songs
And fill the streets
With demonstrations
And the jails with pride.
We breed rebellions
One after another.
Like twenty impossibles we remain
In Lydda, Ramlah, Galilee.

Here, we shall remain.
You may drink the sea;
We shall guard the shade
Of the olive tree and the fig,
Planting ideas
Like the yeast in the dough.
The coldness of ice is in our nerves
And a burning hell in our hearts.
We squeeze the rock
To quench our thirst
And if we starve
We eat the dirt
And never depart
Or grudge our blood.

Here―we have a past
―a present
―and a future.
Our roots are entrenched
Deep in the earth.
Like twenty impossibles
We shall remain.

Let the oppressor review his account
Before the turn of the wheel.
For every action there is a reaction:
Read what is written in the Book.
Like twenty impossibles
We shall remain―in Lydda, in Ramlah
And Galilee. 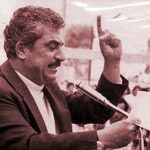 Tawfiq Zayyad (7 May 1929 – 5 Jul 1994) was a Palestinian politician well known for his “poetry of protest.” Born in the Galilee, he studied literature in the USSR. After returning home, he was elected mayor of Nazareth in Dec 1973, as head of Palestine 48 Rakah, a communist party; a victory that is said to have “surprised and alarmed” Israelis. Elected to the Knesset in the 1973, he was active in pressuring the Israeli government to change its policies towards Arabs – both those inside Palestine and in the occupied Palestinian territories.

Anticopyright: Editorials and articles originated on TMS may be freely reprinted, disseminated, translated and used as background material, provided an acknowledgement and link to the source, TMS: We Shall Remain, is included. Thank you.