What Next for Brazil’s Decaying Kleptocracy?

Times are bleak for the South American giant. 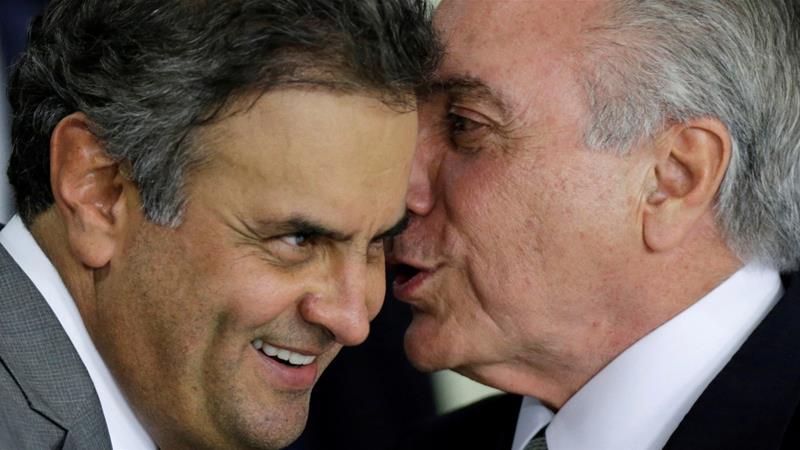 Brazil’s interim President Temer talks with Senator Neves during a ceremony where he made his first public remarks after Rousseff’s impeachment in May 2016. [Ueslei Marcelino/Reuters]

21 May 2017 – Earlier this month, Senator Aecio Neves, a runner-up in Brazil’s 2014 presidential election, published in his Twitter account a self-congratulatory note with reference to President Michel Temer’s first anniversary in office. The message read as follows: “Today we celebrate one year of age of the new government in Brazil. It is hard not to acknowledge all the challenges we have overcome.”

Strangely enough, despite having lost to Dilma Rousseff in the ballot box, Neves kept bragging about the new route Brazil had been following under Temer, Rousseff’s former vice-president. Neves, the national president of PSDB (Brazilian Social Democracy Party) who fiercely opposed the Workers’ Party (PT) during the tenure of Rousseff, currently plays a part in Temer’s government coalition.

Since the publication of that tweet, though, the political mood in the country has dramatically changed, causing Neves to face every sort of inauspicious implication: In a wiretapped conversation, Temer appeared to tell Joesley Batista – one of the owners of Brazil meat-packing giant JBS – to maintain payments to Eduardo Cunha, the disgraced and imprisoned former speaker of the House of Representatives, in return for his silence. Brazilian pundits now believe the president’s fall is certain, should it happen sooner or later.

Neves himself is in deep trouble, too. Some time ago, he was also recorded as he was having an implicating conversation with the very same Mr Batista. In the recording Neves was asking Batista for $700,000 in exchange for influence peddling.

In the Brazilian context, the story of corruption cited above could have been classified as “everyday politics” if it were not for the underlying ironic subtleties: Both Temer and Neves were champions of a moralistic discourse against the Workers’ Party and they ascribed the corruption scandals befalling the country to the 13 consecutive years of left-wing rule. They were both directly responsible for waging an impeachment process against Dilma Rousseff last year.

Now the game is about to turn upside down. Again! But even if Temer and Neves end up toppled and politically defunct, the PT won’t be able to reclaim its lost legitimacy as yet, since two of its most iconic members and former presidents of Brazil, Lula da Silva and Rousseff, may suffer a judicial condemnation at any time for their alleged wrongdoings.

One can tentatively plot some future scenarios for Brazilian politics in the short and mid run. Scenario number one basically concerns the continuity of Temer as president. After the present upheaval, a new political pact among the main parties in the country could be forged as a means to put brakes to the Laja-Jato (Car Wash) operation, the huge criminal investigation led by federal judge Sergio Moro, who is responsible for putting behind bars dozens of tycoons and big bosses in Brazil. Nonetheless, as the dirty laundry of political figures has also come to surface, even if Temer stays in office, social pressure about corruption will skyrocket and the media will make no effort to tune it down.

Scenario number two comprises the fall of Temer and his immediate replacement for Rodrigo Maia, the current Brazilian Congress speaker. After 30 days of Maia taking office, indirect elections would take place, meaning that people would be prevented from voting for president. Within this scenario, any Brazilian adult could be elected president by a vote by the members of the Congress. Every option at hand – from the current president of Brazil’s Supreme Court, Carmen Lucia, to the former president of Brazil, Fernando Henrique Cardoso, sounds controversial and suboptimal.

In this scenario, no matter who gets elected president, Temer and his ministers would escape a political trial for the time being. But they would not be able to resist an occasional blitzkrieg on the part of the judiciary, given that they would be deprived from special immunities – thus being treated like any other citizen before the law.

Scenario number three, the one with the most potential impact, however unlikely to be brought to reality, is the approval of a constitutional amendment (a proposal already under assessment in Congress) which allows for direct general elections as a means to surpass the political dead end Brazil is facing at the moment. In so being, Lula da Silva would qualify as a very competitive candidate and probably become the future president of Brazil. However, that is precisely what the incumbent forces in Brasilia would not like to see coming about. In addition, Lula is under heavy charges of corruption for concealing from the Brazilian authorities some of his patrimonial assets. Almighty judge Moro may – or may not – find him guilty of these charges by the end of the coming month.

OPINION: There is no justice for the poor in Brazil

Times are bleak for South America’s giant. The economy is shrinking in an accelerated manner. In Brazil’s modern history, never before had the country’s gross domestic product decreased 7 percent in two years. The unemployment rate has reached a new historical threshold, currently affecting 14.3 million citizens and their respective families, not to mention the surge in informality and labour precariousness. Temer’s popularity hardly reaches two digits in reliable opinion polls. Social policies are being downsized. Foreign policy chiefs are failing to explore some new windows of opportunity, insisting on same old formulas. Brazil looks desperately in need of a new beginning, of a fresh start. Very unfortunately though, political options seem scarce, vicious and chronically unfeasible. Nobody can predict what move is coming up next, but only one thing is for sure: this story is to be continued.

LISTENING POST: Brazil: An inconvenient protest for the media (25:00)

Dawisson Belem Lopes is a professor of international and comparative politics at Universidade Federal de Minas Gerais and a researcher of the National Council for Scientific and Technological Development (CNPq) in Brazil.