Why Washington is Terrified of Russia, China 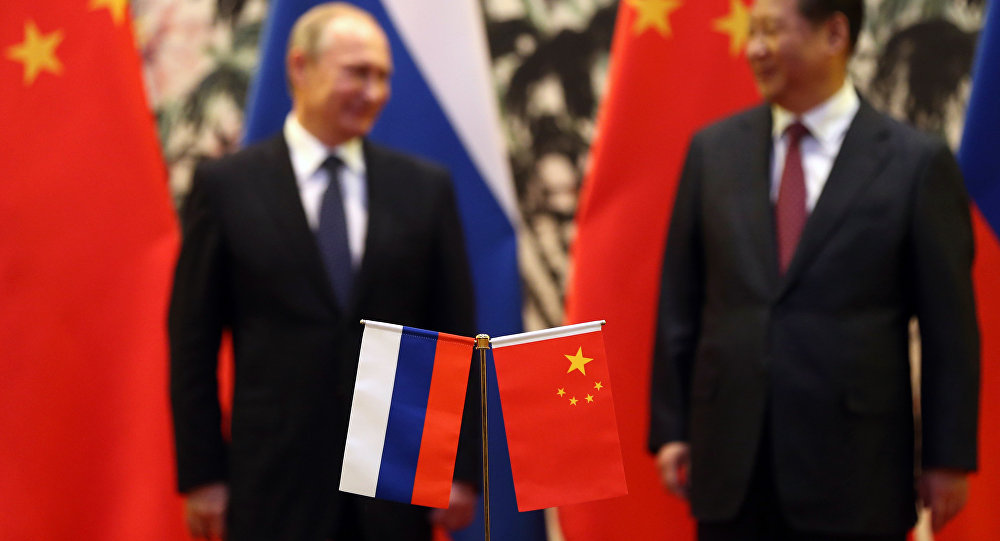 The Russia-China strategic partnership, uniting the Pentagon’s avowed top two “existential” threats to America, does not come with a formal treaty signed with pomp, circumstance – and a military parade.

21 Apr 2017 – Enveloped in layers of subtle sophistication, there’s no way to know the deeper terms Beijing and Moscow have agreed upon behind those innumerable Putin-Xi Jinping high-level meetings.

Diplomats, off the record, occasionally let it slip there may have been a coded message delivered to NATO to the effect that if one of the strategic members is seriously harassed — be it in Ukraine or in the South China Sea – NATO will have to deal with both.

For now, let’s concentrate on two instances of how the partnership works in practice, and why Washington is clueless on how to deal with it.

Exhibit A is the imminent visit to Moscow by the Director of the General Office of the Chinese Communist Party (CCP), Li Zhanshu, invited by the head of the Presidential Administration in the Kremlin, Anton Vaino. Beijing stressed the talks will revolve around – what else — the Russia-China strategic partnership, “as previously agreed on by the countries’ leaders.”

This happens just after China’s First Vice-Premier Zhang Gaoli, one of the top seven in the Politburo and one of the drivers of China’s economic policies, was received in Moscow by President Putin. They discussed Chinese investments in Russia and the key energy angle of the partnership.

But most of all they prepared Putin’s next visit to Beijing, which will be particularly momentous, in the cadre of the One Belt, One Road (OBOR) summit on May 14-15, steered by Xi Jinping.

The General Office of the CCP – directly subordinated to Xi — only holds this kind of ultra-high-level annual consultations with Moscow, and no other player. Needless to add, Li Zhanshu reports directly to Xi as much as Vaino reports directly to Putin. That is as highly strategic as it gets.

That also happens to tie directly to one of the latest episodes featuring The Hollow (Trump) Men, in this case Trump’s bumbling/bombastic National Security Advisor Lt. Gen. HR McMaster.

In a nutshell, McMaster’s spin, jolly regurgitated by US corporate media, is that Trump has developed such a “special chemistry” with Xi after their Tomahawks-with-chocolate cake summit in Mar-a-Lago that Trump has managed to split the Russia-China entente on Syria and isolate Russia in the UN Security Council.

It would have taken only a few minutes for McMaster to read the BRICS joint communiqué on Syria for him to learn that the BRICS are behind Russia.

No wonder a vastly experienced Indian geopolitical observer felt compelled to note that, “Trump and McMaster look somewhat like two country bumpkins who lost their way in the metropolis.”

Exhibit B centers on Russia and China quietly advancing their agreement to progressively replace the US dollar’s reserve status with a gold-backed system.

That also involves the key participation of Kazakhstan – very much interested in using gold as currency along OBOR. Kazakhstan could not be more strategically positioned; a key hub of OBOR; a key member of the Eurasia Economic Union (EEU); member of the Shanghai Cooperation Organization (SCO); and not by accident the smelter of most of Russia’s gold.

In parallel, Russia and China are advancing their own payment systems. With the yuan now enjoying the status of a global currency, China has been swiftly promoting their payment system, CIPS, careful not to frontally antagonize the internationally accepted SWIFT, controlled by the US.

Russia, on the other hand, has stressed the creation of “an alternative,” in the words of Russian Central Bank’s Elvira Nabiullina, in the form of the Mir payment system — a Russian version of Visa/ MasterCard. What’s implied is that were Washington feel inclined to somehow exclude Russia from SWIFT, even temporarily, at least 90 percent of ATMs in Russia would be able to operate on Mir.

China’s UnionPay cards are already an established fixture all across Asia – enthusiastically adopted by HSBC, among others. Combine “alternative” payment systems with a developing gold-backed system – and “toxic” does not even begin to spell out the reaction of the US Federal Reserve.

And it’s not just about Russia and China; it’s about the BRICS.

What First Deputy Governor of Russia’s Central Bank Sergey Shvetsov has outlined is just the beginning: “BRICS countries are large economies with large reserves of gold and an impressive volume of production and consumption of this precious metal. In China, the gold trade is conducted in Shanghai, in Russia it is in Moscow. Our idea is to create a link between the two cities in order to increase trade between the two markets.”

Russia and China already have established systems to do global trade bypassing the US dollar. What Washington did to Iran — cutting their banks off SWIFT – is now unthinkable against Russia and China.

So we’re already on our way, slowly but surely, towards a BRICS “gold marketplace.” A “new financial architecture” is being built. That will imply the eventual inability of the US Fed to export inflation to other nations – especially those included in BRICS, EEU and SCO.

Trump’s Generals, led by “Mad Dog” Mattis, may spin all they want about their need to dominate the planet with their sophisticated AirSeaLandSpaceCyber commands. Yet that may be not enough to counter the myriad ways the Russia-China strategic partnership is developing.

So more on than off, we will have Hollow Men like Vice-President Mike Pence, with empurpled solemnity, threatening North Korea; “The shield stands guard and the sword stands ready.” Forget this does not even qualify as a lousy line in a cheap remake of a Hollywood B-movie; what we have here is Aspiring Commander-in-Chief Pence warning Russia and China there may be some nuclear nitty-gritty very close to their borders between the US and North Korea.

Not gonna happen. So here’s to the great T. S. Eliot, who saw it all decades in advance: