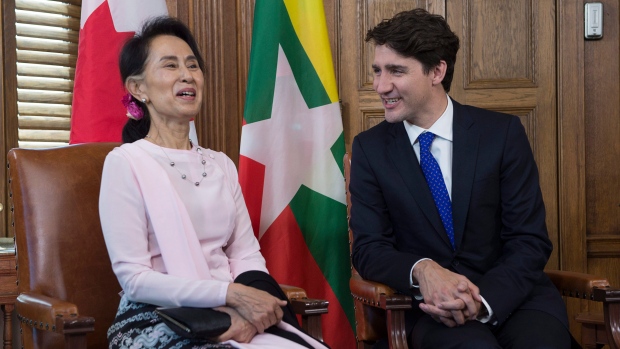 Aung San Suu Kyi, the head of government in Myanmar and an honourary Canadian citizen, shares a laugh with Prime Minister Justin Trudeau in his office on Parliament Hill in Ottawa, Wednesday.
(Adrian Wyld/Canadian Press)

The meeting Wednesday [7 Jun 2017] had the look of a feel-good visit between Prime Minister Justin Trudeau and honorary Canadian citizen Aung San Suu Kyi, the civilian leader of Myanmar, also known as Burma.

But a major international human rights watchdog and groups representing Burmese refugees in Canada called on Trudeau to push Suu Kyi to allow an independent international investigation into allegations of widespread human rights abuses against the Muslim ethnic Rohingya minority in the western state of Rakhine.

Suu Kyi’s government has so far resisted those calls, which came from a special UN commission chaired by former secretary general Kofi Annan.

Farida Deif, Canada director for Human Rights Watch, urged Trudeau to use the meeting with Suu Kyi on Parliament Hill to specifically push her to accept the UN call.

“The prime minister should make clear that Myanmar’s full co-operation with this independent and impartial investigation is expected by Myanmar’s international donors and friends,” said Deif.

Trudeau made no mention of the Rohingya situation during a brief public photo-op with Suu Kyi as the two exchanged pleasantries in his office.

“We have some way to go before we become a working, democratic, federal nation such as yours, but I’m sure we’ll get there,” Suu Kyi told Trudeau.

She is a one-time political prisoner, democracy champion and Nobel Laureate who won a landslide election victory in late 2015.

While Trudeau’s office said he did raise the investigation during the meeting, he didn’t attach any strings. His office said Canada was giving Myanmar an additional $8.8 million in humanitarian assistance to promote “peace and stability” programs, including human rights.

Deif said Canada should view the Rohingya situation as “an important test of the Myanmar government’s commitment to uphold the rule of law and to work constructively with the international community to establish the facts, identify perpetrators and deter future human rights abuses by all sides.”

Trudeau’s spokesman said the prime minister planned to use the meeting to “advocate for further reforms in Myanmar, especially those that support ethnic and religious minorities, women, and young people — including the situation of the Rohingya.”

The prime minister also offered Suu Kyi Canada’s condolences for the loss of a military plane from Myanmar, which disappeared Wednesday while carrying more than 100 passengers and crew.

The Karen Community of Canada, which represents ethnic Karen refugees, also urged Trudeau to press for an independent UN investigation in Myanmar.

The group said in an open letter to Trudeau it didn’t want the visit to be a “feel-good celebration” that will ignore “human rights abuses in Burma’s ethnic areas, which Aung San Suu Kyi’s government has done virtually nothing to alleviate.”

The Rohingya situation has dulled much of the lustre of Suu Kyi’s successful entry into democratic politics in what was once one of South Asia’s most repressive military regimes. She spent 15 years in detention in Myanmar before her National League for Democracy won the election after five decades of military rule in her poor, but resource-rich country.

Former Conservative foreign affairs minister John Baird travelled to Myanmar in 2012 to present Suu Kyi with honorary Canadian citizenship and support her and the democratic reforms that were taking root then.

Canada has since re-established diplomatic relations with Myanmar and wants to forge new business links with a country the World Bank has described as possessing “fertile lands, significant untapped agricultural potential and a rich endowment of natural resources.”

But in its letter to Trudeau, the Karen community urged the government to reign in its enthusiasm for exploiting opportunities in Myanmar’s oil and gas sector because that has human rights implications.