Israeli bulldozers flattened a village inhabited by the ancient Palestinian Bedouins, a tribe that has lived on the land for thousands of years. Israeli authorities have systematically run the indigenous Bedouins off of their land to pave the way for Jewish-only settlements. 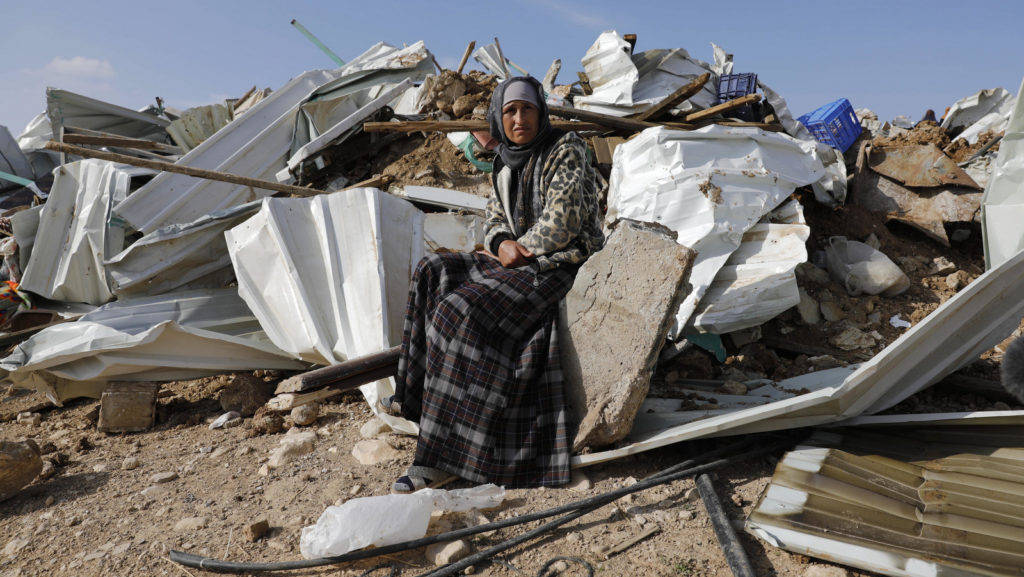 A Bedouin woman sit on the remnants of her demolished home in the Bedouin village of Umm al-Hiran, near the southern city of Beersheba, Israel, Jan. 18, 2017. (AP/Tsafrir Abayov)

19 Jun 2017 — Israel Land Authority (ILA) officials, along with Israeli police and several bulldozers, raided and then demolished the Bedouin village of al-Araqib in the Negev region this week.

The demolition marked the 114th time that the ILA has destroyed the village, with the first time taking place in 2010 and the most recent prior to Wednesday’s demolition taking place just last month.

Most of the structures that were demolished on Wednesday were tin homes that village residents had built over the course of the last month in order to continue living in the area.

But while the residents of al-Araqib are grappling with the most recent demolition that has wiped out their village, Israeli Jewish communities in the region continue to expand on Palestinian land.

Several rights groups have argued that the demolition of Bedouin villages is directly related to the expansion of illegal Jewish settlements, describing the policy as a means of removing the indigenous Palestinian population in order to create even more settlements for Jewish-only Israelis.

Since Israel’s inception in 1948, white Jewish-only settlements have been built on indigenous Palestinian land after the indigenous population has been ethnically cleansed in order to accommodate European Jews in beginning their new lives in Israel. 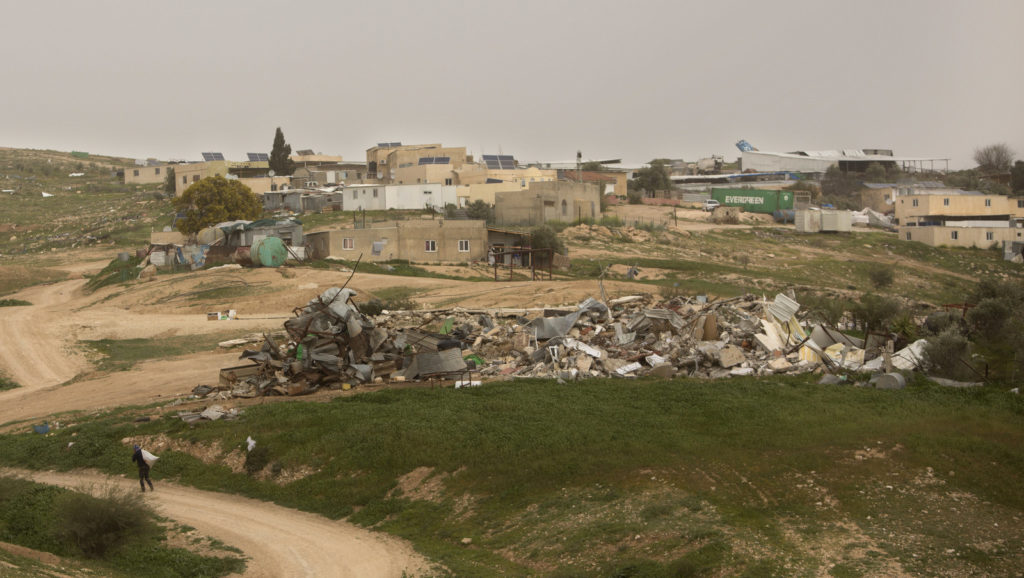 A man walks near the debris of demolished homes, in the Bedouin village of Umm al-Hiran, Israel, March 12, 2017. (AP/Sebastian Scheiner)

The historic Palestinian Bedouins have lived in the villages since they were forcibly transferred to the sites by an Israeli military order issued in 1956. However, the Bedouins significantly predate the state of Israel, as they have lived in the area for thousands of years as the original Arab ethnic group of the Middle East.

ILA officials have been repeatedly accused by residents of carrying out demolitions with little consideration for the village’s residents. Indeed, instead of providing any resources for the now-homeless villagers, al-Araqib’s residents have been ordered by the Israeli government to pay for the cumulative cost of the 114 demolitions that have been carried out since 2010, a figure which stands at more than 2 million shekels, or roughly $541,000.

However, the Palestinian Bedouins – despite the constant destruction of their homes – have remained defiant, refusing to relocate. Following last month’s demolition, al-Araqib resident Sayyah al-Turi told the Ma’an News Agency “All demolition crimes will not scare us or stop us from rebuilding our homes and holding on to our lands. We will stay here despite the injustice and criminal demolitions, we will not submit to their plans of uprooting and displacing us.”

Al-Araqib is one of 35 Bedouin villages that the Israeli government considers “unrecognized,” even though more than half of the estimated 160,000 Bedouins living in the Negev region reside in such villages. The “unrecognized” classification also prevents Bedouins living in these villages from developing or expanding their communities. It has also led to Israeli authorities refusing to connect the villages to national water and electric grids and refusing to offer their residents healthcare and educational services, despite the fact that the Bedouins are technically Israeli citizens. 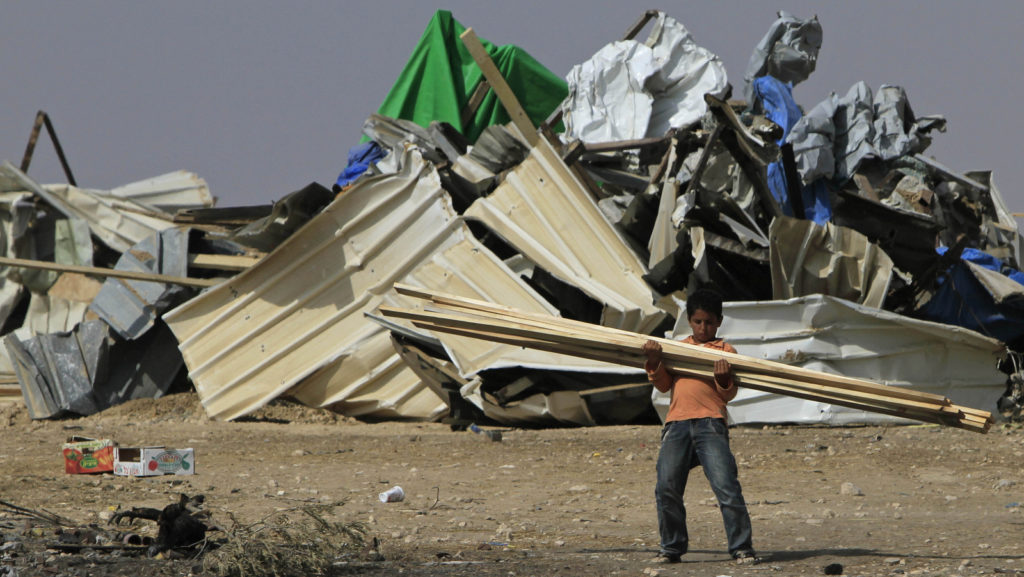 A Bedouin boy carries timber to rebuild his home after it was demolished by Israeli authorities in the village of El Araqib in southern Israel in 2010. (AP/Tsafrir Abayov)

Settlement activity on the rise

The Israeli NGO Peace Now reported earlier this month that the number of settlements approved in the first half of 2017 is nearly triple the number that was approved in all of 2016, with 7,721 housing units approved since January compared to 2,657 over the entire course of last year.

Demolitions of Palestinian homes within Israel have also picked up in the first half of the year, beginning with a deadly pre-dawn demolition raid on the Bedouin village of Umm al-Hiran in January. A new Jewish-Israeli town called “Hiran” is set to take the village’s place.

The push to expand illegal settlements at all costs has recently brought international condemnation against the Israeli government, with the United States, the United Kingdom and Japan condemning the expansion of illegal settlements, saying this phenomenon is “not conducive” to the peace process.

However, Israeli Prime Minister Benjamin Netanyahu seems less than concerned with such statements, as evidenced by his comments at a ceremony celebrating the 50th anniversary of the Six-Day War earlier this month. At the ceremony, Netanyahu promised an audience of Jewish settlers that he was “doing whatever is needed to protect the Jewish settlement enterprise.”

It will likely take more than stern words from foreign governments to convince the Israeli government to abandon its illegal activities, which have compounded the suffering of indigenous Palestinians who are losing their land to modern-day colonization.