No Walls in Ethiopia, Rather Open Doors—Even for Its Enemy 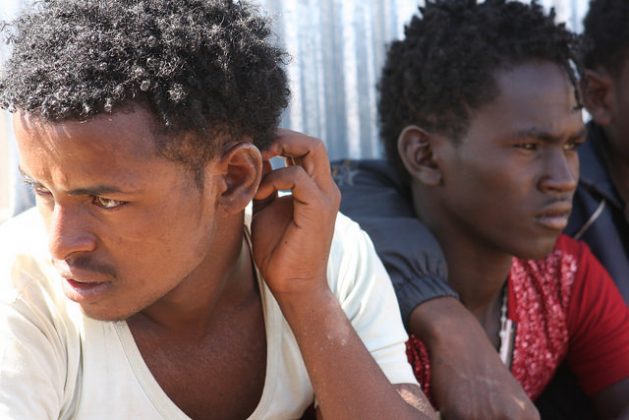 Eritrean teenagers and young men, aged from 16 to 20, waiting at the Badme entry point to be moved to the screening registration center.
Credit: James Jeffrey/IPS

22 Jun 2017 – It’s one thing to read about the exodus of souls flowing out of Eritrea, it’s quite another to look into the tired eyes, surrounded by dust and grime, of a 14-year-old Eritrean girl who’s just arrived on the Ethiopian side of the shared border.

She is carrying a scruffy plastic bag. Inside are a few clothes, an orange beaker, and a small torch whose batteries have nearly run out.

With her are four men, two women and five younger children, all of whom crossed the Eritrea-Ethiopia border the night before. Ethiopian soldiers found them and took them to the town of Adinbried.

The compound of simple government buildings where they were dropped off constitutes a so-called entry point, one of 12 along the border. It marks the beginning of the bureaucratic and logistical conveyor belt to assign asylum status to those arriving, before finally moving them to one of four refugee camps designated for Eritreans in Ethiopia’s Tigray region.

“It took us four days traveling from Asmara,” a 31-year-man among the group says about their trek from the Eritrean capital, about 80 kilometres north of the border. “We travelled for 10 hours each night, sleeping in the desert during the day.”

Ethiopia’s open-door policy is in marked contrast to the strategies of migrant reduction increasingly being adopted in many Western societies.

And its stance is all the more striking due to the Eritrean and Ethiopian governments forever accusing the one of plotting against the other amid an atmosphere of mutual loathing.

But it appears the Ethiopian government is willing to treat ordinary Eritreans differently.

“We differentiate between the government and its people,” says ARRA’s Estifanos Gebremedhin. “We are the same people, we share the same blood, even the same grandfathers.”

“We are the same people; we share the same blood, even the same grandfathers.”
— Estifanos Gebremedhin, head of the legal and protection department for Ethiopia’s Administration for Refugee and Returnee Affairs

Before Eritrea gained independence, it was Ethiopia’s most northern region. On both sides of today’s border many people still share the same language—Tigrinya—as well as Orthodox religion and cultural traditions.

Shimelba was the first Eritrean refugee camp to open in 2004. It now houses more than 6,000 refugees. About 60 percent of its population come from the Kunama ethnic group, one of nine in Eritrea, and historically the most marginalised.

“I have no interest in going to other countries,” says Nagazeuelle, a Kunama who has been in Ethiopia for 17 years. “I need my country. We had rich and fertile land, but the government took it. We weren’t an educated people, so they picked on us. I am an example of the first refugees from Eritrea, but now people from all nine ethnic groups are coming.”

Discussion among refugees in Shimelba camp of governmental atrocities ranges from accusations of genocide against the Kunama, including mass poisonings, to government officials shopping at markets and then shooting stall owners due to disagreements over prices.

“The world has forgotten us, apart from the U.S., Canada and Ethiopia,” says Haile, an Eritrean in his fifties who has been a refugee for five years. He says his father and brother died in prison. “What is happening is beyond language, it is a deep crisis—so why is the international community silent?” 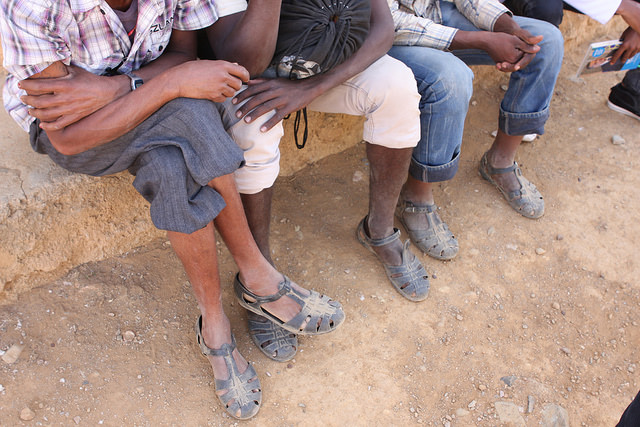 There are some, however, who argue the situation in Eritrea isn’t as bad as claimed. A UN report last year accusing Eritrea’s leadership of crimes against humanity has received criticism for being one-sided, failing to acknowledge Eritrea’s progress with the likes of providing healthcare and education, and thereby entrenching a skewed negative perspective dominant in policy circles and Western media.

“It is real, nothing is exaggerated,” says Dawit, a Shimelba resident of eight years. “We have the victims of rape, torture and imprisonment in our camp who can testify.”

About 50 kilometres south of Shimelba is Hitsats, the newest and largest of the four camps with 11,000 refugees, of whom about 80 percent are under 35 years of age.

“In Sudan there are more problems, we can sleep peacefully here,” says 32-year-old Ariam, who came to Hitsat four years ago with her two children after spending four years in a refugee camp in neighbouring Sudan.

Refugees say the Eritrean military launches missions into Sudan to capture refugees who have fled.

Ethiopia also hosts refugees from a plethora of other strife-torn countries. Its refugee population now exceeds 800,000—the highest number in Africa, and the 6th largest globally.

“Ethiopia strongly believes that generous hosting of refugees will be good for regional relationships down the road,” says  Jennifer Riggan, an associate professor of International Studies at Arcadia University in the US, and analyst of Eritrean refugees in Ethiopia.

Others point out how there is also an increasing amount of money involved with refugees. The likes of the UK and Europe are providing Ethiopia with financial incentives to keep refugees within its borders—similar to the approach taken with Turkey—so they don’t continue beyond Africa.

Meanwhile, despite the apparent welcome given to Eritrean refugees, frictions remain.

“People recognise the shared culture and ethnic background, and that helps for many things, but there’s still distrust because of the 30-year-war [for independence],” says Milena Belloni, an anthropologist who is currently writing a book about Eritrean refugees. “There’s a double narrative.”

While both sides talk of the other as brothers, she explains, historically Eritreans have looked down on Tigrayans—based on them working as migrant labourers in Eritrea during its heyday as a semi-industrialised Italian colony—while Tigrayans viewed Eritreans as arrogant and aloof.

Either way, Ethiopia appears to be looking to better assimilate refugees by embracing the 2016 Leaders’ Summit on Refugees—pushed by former U.S. President Barack Obama—that called for better integration and education, employment and residency opportunities for refugees wherever they land around the world.

“Ethiopia’s response is to manage the gate, and figure out how it can benefit from these inevitable flows of people,” Riggan says. “I definitely think Ethiopia’s approach is the wiser and more realistic one.”

About 10 miles north of Adinbried the military forces of Ethiopia and Eritrea straddle the border, eying each other suspiciously through binoculars overlooking derelict military emplacements that serve as grim reminders of a former two-year war and ongoing fraught relations between the two countries.

In 1998 Eritrea invaded the small and inconsequential-looking border town of Badme before pushing south to occupy the rest of Ethiopia’s Yirga Triangle, claiming it was historically Eritrean land.

Ethiopia eventually regained the land but the fighting cost both countries thousands of lives, billions of dollars desperately needed elsewhere in such poor and financially strapped countries, and sowed rancour and disagreement festering ever since.

Because despite the internationally brokered peace settlement that followed the 2000 ceasefire ruling Badme return to Eritrea, Ethiopia still occupies it—the government felt the Ethiopian public wouldn’t tolerate the concession of a now iconic town responsible for so many lost Ethiopian lives—and the rest of the Yirga Triangle jutting defiantly into Eritrea.

While Badme hasn’t changed much since those days—it remains a dusty, ramshackle town—it too is involved in current Eritrean migration.

“I crossed after hearing they were about to round people up for the military,” says 20-year-old Gebre at the entry point on the edge of Badme. “I wasn’t going to go through that—you’re hungry, there’s no salary, you’re not doing anything to help your country; you’re just serving officials.”

With Gebre are another 14 males ranging in age from 16 to 20 who crossed to avoid military service, as well as two mothers who crossed with two young children each.

“Life was getting worse, I had no work to earn money to feed my children,” says 34-year-old mother-of-four Samrawit, who left two older children in Eritrea.

She travelled with 22-year-old mother-of-two Yordanos, having met her at the Eritrean town of Barentua, about 50 kilometres north of the border, and the rendezvous point with their smuggler.

Neither knows how much the smuggler earned for driving them to the border and helping them across: payment was organised by their husbands living in Switzerland and Holland.

“I would like to make sure coming here is worth it before my elder two children come,” Samrawit says.