Idea that modern humans evolved in East Africa 200,000 years ago challenged by extraordinary discovery of 300,000-year-old remains in Moroccan mine.

7 Jun 2017 – Fossils recovered from an old mine on a desolate mountain in Morocco have rocked one of the most enduring foundations of the human story: that Homo sapiens arose in a cradle of humankind in East Africa 200,000 years ago.

Archaeologists unearthed the bones of at least five people at Jebel Irhoud, a former barite mine 100km west of Marrakesh, in excavations that lasted years. They knew the remains were old, but were stunned when dating tests revealed that a tooth and stone tools found with the bones were about 300,000 years old.

“My reaction was a big ‘wow’,” said Jean-Jacques Hublin, a senior scientist on the team at the Max Planck Institute for Evolutionary Anthropology in Leipzig. “I was expecting them to be old, but not that old.”

Hublin said the extreme age of the bones makes them the oldest known specimens of modern humans and poses a major challenge to the idea that the earliest members of our species evolved in a “Garden of Eden” in East Africa one hundred thousand years later.

“This gives us a completely different picture of the evolution of our species. It goes much further back in time, but also the very process of evolution is different to what we thought,” Hublin told the Guardian. “It looks like our species was already present probably all over Africa by 300,000 years ago. If there was a Garden of Eden, it might have been the size of the continent.”

Jebel Irhoud has thrown up puzzles for scientists since fossilised bones were first found at the site in the 1960s. Remains found in 1961 and 1962, and stone tools recovered with them, were attributed to Neanderthals and at first considered to be only 40,000 years old. At the time, a popular view held that modern humans evolved from Neanderthals. Today, the Neanderthals are considered a sister group that lived alongside, and even bred with, our modern human ancestors.

In fresh excavations at the Jebel Irhoud site, Hublin and others found more remains, including a partial skull, a jawbone, teeth and limb bones belonging to three adults, a juvenile, and a child aged about eight years old. The remains, which resemble modern humans more than any other species, were recovered from the base of an old limestone cave that had its roof smashed in during mining operations at the site. Alongside the bones, researchers found sharpened flint tools, a good number of gazelle bones, and lumps of charcoal, perhaps left over from fires that warmed those who once lived there.

“It’s rather a desolate landscape, but on the horizon you have the Atlas mountains with snow on top and it’s very beautiful,” said Hublin. “When we found the skull and mandible I was emotional. They are only fossils, but they have been human beings and very quickly you make a connection with these people who lived and died here 300,000 years ago.” 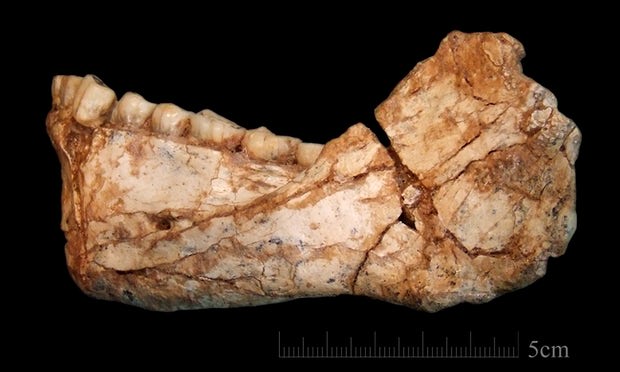 The first almost complete adult mandible discovered at the site of Jebel Irhoud. The bone morphology and the dentition display a combination of archaic and evolved features. Photograph: Credit: Jean-Jacques Hublin, MPI-EVA, Leipzig

Scientists have long looked to East Africa as the birthplace of modern humans. Until the latest findings from Jebel Irhoud, the oldest known remnants of our species were found at Omo Kibish in Ethiopia and dated to 195,000 years old. Other fossils and genetic evidence all point to an African origin for modern humans.

In the first of two papers published in Nature on Wednesday, the researchers describe how they compared the freshly-excavated fossils with those of modern humans, Neanderthals and ancient human relatives that lived up to 1.8m years ago. Facially, the closest match was with modern humans. The lower jaw was similar to modern Homo sapiens too, but much larger. The most striking difference was the shape of the braincase which was more elongated than that of humans today. It suggests, said Hublin, that the modern brain evolved in Homo sapiens and was not inherited from a predecessor.

Apart from being more stout and muscular, the adults at Jebel Irhoud looked similar to people alive today. “The face of the specimen we found is the face of someone you could meet on the tube in London,” Hublin said. In a second paper, the scientists lay out how they dated the stone tools to between 280,000 and 350,000 years, and a lone tooth to 290,000 years old. 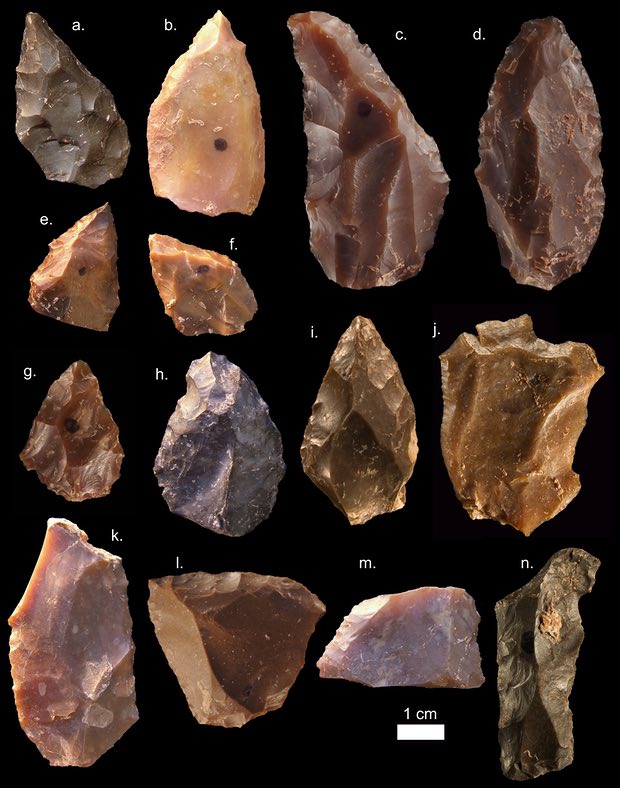 The tools found were based on a knapping technique called Levallois, adding to the realisation that the sophisticated way of shaping tools originated earlier than thought. Photograph: Credit: Mohammed Kamal, MPI EVA Leipzig

The remains of more individuals may yet be found at the site. But precisely what they were doing there is unclear. Analysis of the flint tools shows that the stones came not from the local area, but from a region 50km south of Jebel Irhoud. “Why did they come here? They brought their toolkit with them and they exhausted it,” Hublin said. “The tools they brought with them have been resharpened, resharpened, and resharpened again. They did not produce new tools on the spot. It might be that they did not stay that long, or maybe it was an area they would come to do something specific. We think they were hunting gazelles, there are a lot of gazelle bones, and they were making a lot of fires.”

Hublin concedes that scientists have too few fossils to know whether modern humans had spread to the four corners of Africa 300,000 years ago. The speculation is based on what the scientists see as similar features in a 260,000-year-old skull found in Florisbad in South Africa.

But he finds the theory compelling. “The idea is that early Homo sapiens dispersed around the continent and elements of human modernity appeared in different places, and so different parts of Africa contributed to the emergence of what we call modern humans today,” he said.

John McNabb, an archaeologist at the University of Southampton, said: “One of the big questions about the emergence of anatomically modern humans has been did our body plan evolve quickly or slowly. This find seems to suggest the latter. It seems our faces became modern long before our skulls took on the shape they have today.”

“There are some intriguing possibilities here too. The tools the people at Jebel Irhoud were making were based on a knapping technique called Levallois, a sophisticated way of shaping stone tools. The date of 300,000 years ago adds to a growing realisation that Levallois originates a lot earlier than we thought. Is Jebel Irhoud telling us that this new technology is linked to the emergence of the hominin line that will lead to modern humans? Does the new find imply there was more than one hominin lineage in Africa at this time? It really stirs the pot.”

Lee Berger, whose team recently discovered the 300,000 year-old Homo naledi, an archaic-looking human relative, near the Cradle of Humankind World Heritage site outside Johannesburg, said dating the Jebel Irhoud bones was thrilling, but is unconvinced that modern humans lived all over Africa so long ago. “They’ve taken two data points and not drawn a line between them, but a giant map of Africa,” he said.

John Shea, an archaeologist at Stony Brook University in New York who was not involved in the study, said he was cautious whenever researchers claimed they had found the oldest of anything. “It’s best not to judge by the big splash they make when they are first announced, but rather to wait and see some years down the line whether the waves from that splash have altered the shoreline,” he said, adding that stone tools can move around in cave sediments and settle in layers of a different age.

Shea was also uneasy with the scientists combining fossils from different individuals, and comparing reconstructions of complete skulls from fragmentary remains. “Such ‘chimeras’ can look very different from the individuals on which they are based,” he said.

“For me, claiming these remains are Homo sapiens stretches the meaning of that term a bit,” Shea added. “These humans who lived between 50,000-300,000 years ago are a morphologically diverse bunch. Whenever we find more than a couple of them from the same deposits, such as at Omo Kibish and Herto in Ethiopia or Skhul and Qafzeh in Israel, their morphology is all over the place both within and between samples.”

But Jessica Thompson, an anthropologist at Emory University in Atlanta, said the new results show just how incredible the Jebel Irhoud site is. “These fossils are the rarest of the rare because the human fossil record from this time period in Africa is so poorly represented. They give us a direct look at what early members of our species looked like, as well as their behaviour.

“You might also look twice at the brow ridges if you saw them on a living person. It might not be a face you’d see every day, but you would definitely recognise it as human,” she said. “It really does look like in Africa especially, but also globally, our evolution was characterised by numerous different species all living at the same time and possibly even in the same places.”