The WHO announced Friday [2 Jun] that nearly 73,700 people have been affected by Yemen’s cholera epidemic. 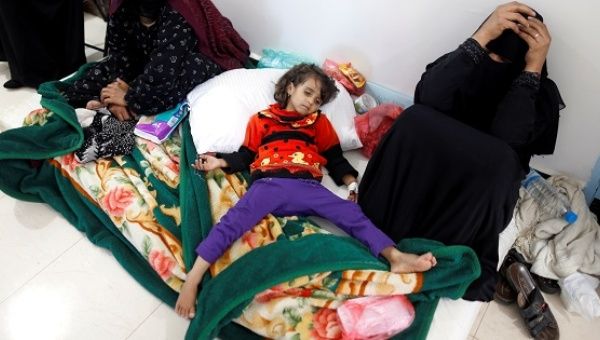 A girl infected with cholera lies on the ground at a hospital in Sanaa.
| Photo: Reuters

The attack in Qahza, in the province of Sa’ada, also devastated the facility’s medical equipment and the building itself, forcing the center to halt operations.

The assault comes as the World Health Organization said Friday that Yemen’s cholera epidemic has resulted in 605 deaths thus far, 40 percent of whom were children, with the number of people likely infected totaling up to 73,700.

#Cholera continues to spread in #Yemen. Over 73,700 suspected cholera cases and 605 associated deaths have been reported in 19 governorates. pic.twitter.com/D9GcJOeR0y

RELATED: Yemen – a Nation in Resistance Against Wahhabi Imperialism

In addition, UNICEF warned Saturday that the cases of cholera could double every two weeks, unless more aid is delivered to the region ravaged by the U.S.-backed, Saudi-led war.  The official warned that the outbreak could potentially “spread beyond Yemen” as the imperialist aggression enters well beyond its third year.

“It is sad today, but we hope the cholera outbreak will be the turning point in turning people’s attention to Yemen,” he stated. “Cholera is not going to be stopped by any border.”

Despite calls for aid, assistance to Yemenis amid the war proves challenging, given reports that the Saudi-led coalition has previously targeted the country’s main port of Hodeidah, obstructing attempts to import much-needed food, medical and fuel supplies.