The Climate Movement Charges On, Even without the USA

Developing nations lay claim to the mantle of leadership for a fairer, safer world. 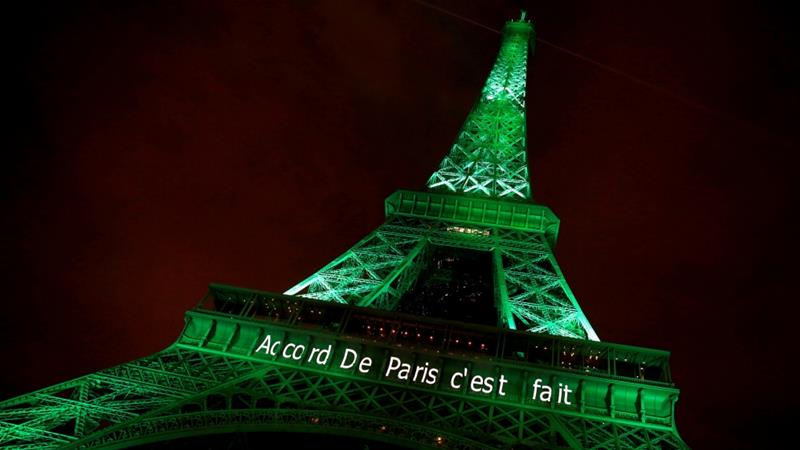 The Eiffel tower is illuminated in green with the words ‘Paris Agreement is Done’, to celebrate the Paris UN COP21 Climate Change agreement in November 2016. [Jacky Naegelen/Reuters]

18 Jun 2017 – President Donald Trump has proved again how beholden our politics are to the interests of the super-rich elite. The conniving, rich oilmen that were so desperate to prevent and frustrate the Paris Agreement found cheerleaders in Mr Trump and his party. They choose to protect their profits from a flailing fossil fuel industry over human lives and a clean, inclusive future for us all.

The Paris climate agreement threw people of the world a lifeline, and the United States played a vital role in getting us there, not least by working closely with China to clear the decks to a global deal. The world agreed on what needed to be done. One hundred ninety-five nations pledged to keep warming below 1.5 degrees Celsius and to achieve net zero emissions by mid-century.

Now, we remember how frayed that lifeline is, mostly for people in the global South. The emission cuts pledged still put the world on track for three degrees of warming. If you’re living in a low-island state? That’s too high for the prospect of a future. For the 13 million people in the Horn of Africa going hungry today, the Agreement is already too late. Climate change has worsened their suffering. They pay for a crisis they did not cause.

At times like this, I remember my uncle, a farmer in rural Uganda. It would take him 180 years to register the same emissions as the average American would in a year (pdf)! Why must he and his family suffer because of the excesses of others?

What’s most painful is that the Paris Agreement was already compromised with concessions to the US. Despite being the world’s largest historic emitter, the US put forward only a fifth of their fair share to cut emissions.

READ MORE: Paris climate agreement – What you need to know

Contrast this to what developing countries have put forward: 125 percent of their fair share. This is where the good news starts. With every move, the pendulum of climate leadership swings further and more decisively towards the global South.

The spirit of Paris charges on, even without the US government, and with it the palpable hope of a better world.

Recent forecasts show that China and India are on track to beat their emissions reduction targets. At the most recent global climate talks last November, 48 developing countries vulnerable to the impacts of climate change committed to 100 percent renewable energy by 2050.

That’s not all. A transformation is taking hold in global energy markets. The cost of wind and solar has dropped by up to 80 percent in the last six years and unsubsidized solar is beginning to out-compete coal and natural gas on a larger scale.

In the US, the solar industry is growing, creating “jobs, jobs, jobs” over 15 times faster than the economy norm. At home in Africa, I’m energised by the growth of off-grid solar at such a pace that it could soon outstrip the rate at which people are being connected to the grid. These solutions are connecting people to power and giving them control over their energy resources.

Far from putting America first, President Trump’s move puts the US last in the race to build a more sustainable economy.

Developing nations are joined by mayors of cities around the world, and businesses that finally stepped up in Paris to challenge vested interests in the fossil fuel industry. More companies than ever before are racing to commit to renewable power, 100 percent. Businesses, investors, mayors and academics, together representing $6.2 trillion of the US economy recently signed a pact to continue fighting climate change. They know that pulling out of Paris puts American workers at an economic disadvantage.

I trust that people in the US will not let their government get away with this. People fighting climate change around the world are in solidarity with our friends in the US as they organise nationwide marches and rally to block coal plants and pipelines from being built.

The climate movement is re-energised. The move to a zero-carbon future is unstoppable. Despite the injustice of Mr Trump’s decision, our only response must be to redouble efforts everywhere else and strengthen the lifeline that Paris offered.

Nor can our world rely any longer on this outdated global governance which privileges richest nations at the expense of developing nations. Southern governments have taken on more responsibility for our world: this should be reflected in their power and position in the institutions of global governance.

The oilmen who fuelled this crisis are still there – doing their dirty business as usual – because the system perpetuates their wealth and power. The richest one percent today own more than the 99 percent combined; eight men own as much as the bottom 3.6 billion. Political institutions march to the tune of powerful corporations and the super-rich. Tackling the extreme gap between rich and poor and tackling climate change is part of the same struggle.

The spirit of Paris charges on, even without the US government, and with it the palpable hope of a better world.