While the U.S. government claims its use is lawful, Human Rights Watch has called to strengthen international law on the use of incendiary weapons. 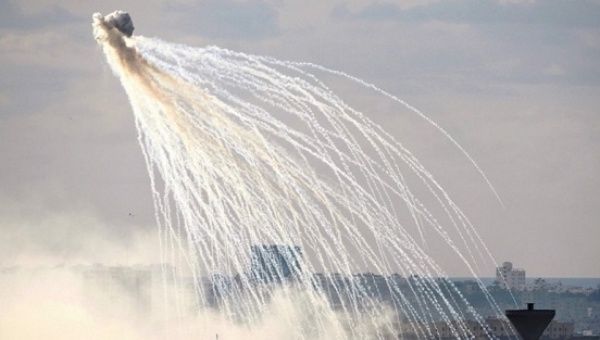 14 Jun 2017 – The United States-led coalition in Iraq and Syria is facing heavy criticism for its use of white phosphorous, an incendiary chemical that ignites on contact with atmospheric oxygen, causing severe and mortal burns to those affected.

“The use of artillery-delivered white phosphorous by the United States-led coalition… raises serious questions about the protection of civilians,” Human Rights Watch said Wednesday.

White phosphorous can be utilized for several purposes. Its incendiary properties, which produces a temperature of around 1500°F, can be used as a deadly weapon. The substance has a tendancy to stick to flesh, burning through and creating deep wounds so long as it is exposed to oxygen.

Its secondary effect of producing a thick blanket of smoke can also be used as an obscurant or marker.

“This multipurpose munition should never be used… in populated areas,” the group said.

Recently, video and witness evidence have indicated that the chemical is being used in Islamic State group strongholds, which are usually heavily populated areas with many civilians.

Videos released online, by both an activist group called Raqqa is Being Slaughtered Silently, as well as the Islamic State group news-agency, showed showers of white phosphorous munitions raining down in an eastern part of Raqqa.

The New York Times has also reported witnesses in Raqqa claiming that they had seen white phosphorous being used, and that an internet cafe had been hit recently, killing about 20 people.

While the U.S. government claims its use of white phosphorous is lawful, Human Rights Watch has called on states to strengthen international law regarding the usage of incendiary weapons.

According to Human Rights Watch, the U.S. is using M825-series 155mm artillery projectiles, containing white phosphorous that ignites and burns when exposed to the air after exploding.

These types of weapons are U.S. made, and neither the Islamic State group or the Syrian government is known to have posessed or used weapons of this type.

The weapon is a mainstay of U.S. and U.S. allied military forces, having been used heavily in Vietnam, up through more recent conflicts in Iraq and Syria.

The Saudi Arabian coalition has also been noted to use white phosphorous in its ongoing barrage of Yemen.

The Israeli state used white phosphorous in heavily populated areas of the Palestinian occupied Gaza Strip during offensives in 2008-2009, for which is faced international criticism.

White phosphorous burns have extremely high mortality rates, because the substance will often continue to burn on the flesh long after contact after regaining oxygen exposure when bandanges and dressings are removed.