14 Jun 2017 – The Open Source Drug Discovery project, launched in 2008 by biophysicist Samir Brahmachari, aims to develop low-cost treatments for neglected diseases using an open-source approach. Brahmachari is founding director of India’s Institute of Genomics and Integrative Biology. He was interviewed by Gaëll Mainguy, director of development and international relations for the CRI (conversation has been edited and condensed for publication). 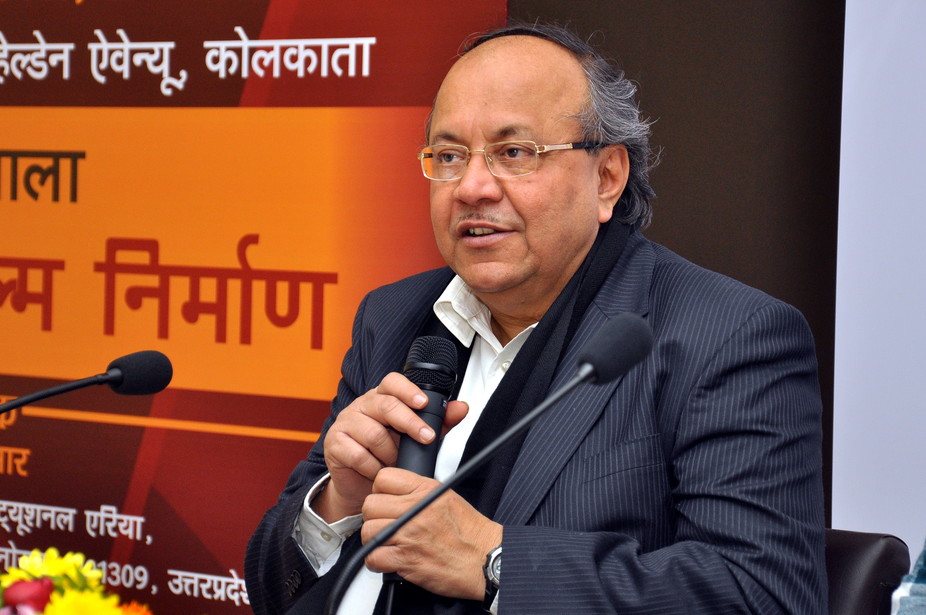 Professor Samir Brahmachar: ‘Why should drug discovery be kept in the Wright brothers’ era of trial and error?’ Alchetron.com

Gaëll Mainguy: Professor Brahmachari, can you introduce yourself in a few words?

Samir Brahmachari: I have dedicated most of my career to DNA structure and function, and in particular to repetitive sequences – long before the discovery of trinucleotide repeats, a major cause of neurological and neuromuscular diseases. I got hooked to the subject of the potential functions of the so called “junk” portion of the genome when I was a post-doc in Paris in Jacques Monod’s laboratory. The field was virtually blank and not yet competitive – a real bonanza for a young researcher looking to start a scientific career. This uncharted territory was fascinating.

In 1997, I moved to Delhi and founded the Institute of Genomics and Integrative Biology, associated with a large number of hospitals and doctors, to annotate and analyse the functions of genome variations. I led the Human Genome Variation project for Asia and mapped the Indian genomic diversity to identify predictive markers for complex diseases and pharmacogenomics studies.

That’s when I decided to move to bacteria: as people were discussing the need for modelling an entire human genome, I realised that the complexity of our species and the paucity of data would preclude such an endeavour for a long time to come. The question was: is it possible to build a computational model of 4,000 genes?

Right now I’m in Paris as a member of the Scientific Advisory Board of the Centre for Research and Interdisciplinarity because of my work on Open Source Drug Discovery (OSDD). 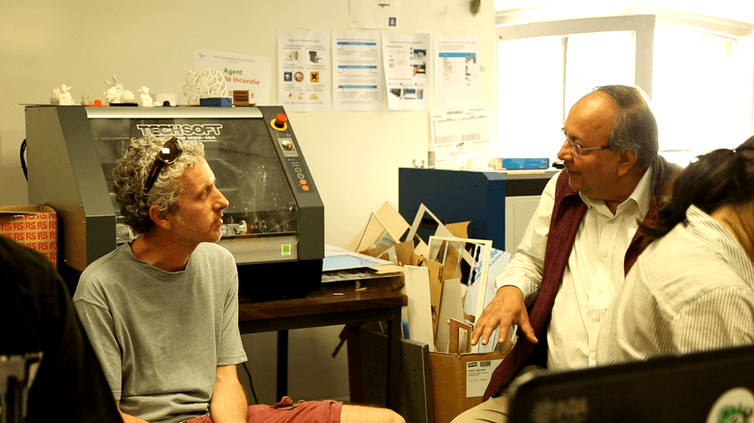 Samir Brahmachari (right) speaks with researchers at the Centre for Research and Interdisciplinarity in Paris. CRI

What is Open Source Drug Discovery and why did you start the project?

S.B.: OSDD is a global platform – one of the first crowdsourcing pharma projects – where the best minds can collaborate and collectively discover novel therapies for neglected diseases.

While I was serving as director general of the Council of Scientific & Industrial Research and at the Department of Scientific and Industrial Research (DSIR), for the Indian government, I designed and led a project on Mycobacterium tuberculosis (MTB), the bacteria responsible for tuberculosis (TB). TB is a dreadful disease: it infects a third of the world’s population and claims 1.4 million lives per year. Yet it is neglected; the last TB drug was developed in the 1960s.

I felt the obligation to use the TB genome – which was known for ten years without anyone making any effort to turn these data into useful knowledge – to develop new therapies. 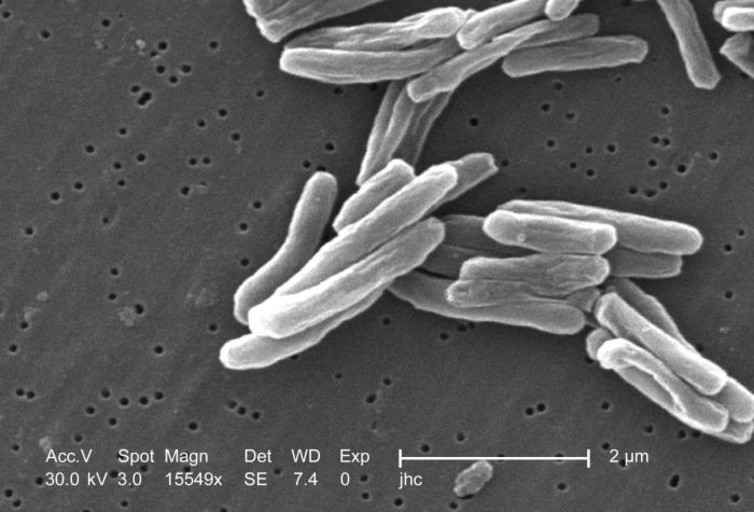 Under a high magnification of 15549x, a details of the Mycobacterium tuberculosis bacteria. CDC/ Dr. Ray Butler; Janice Carr/Wikimedia

Why did you decide to go open source? What advantages does it bring?

S.B.: The Wright brothers paved the way to modern aeronautics by conceiving and testing prototypes that were more or less able to fly. That was brave and courageous but also slow and perilous. Today, aircraft are entirely conceived and designed on computers, which model them in all their complexity. Why should drug discovery be kept in the Wright brothers’ era of trial and error?

It should be possible to upgrade and design drugs in computers. For us, the first challenge was to obtain a comprehensive understanding of Mycobacterium tuberculosis. The genome was only 50% annotated, and completing it was a daunting task that required retrieving and reading more than 45,000 articles on the subject.

No single team could do this alone – it had to be scaled. With crowdsourcing, the work was completed within one year. We started with 1,200 students, and 400 remained until the end. 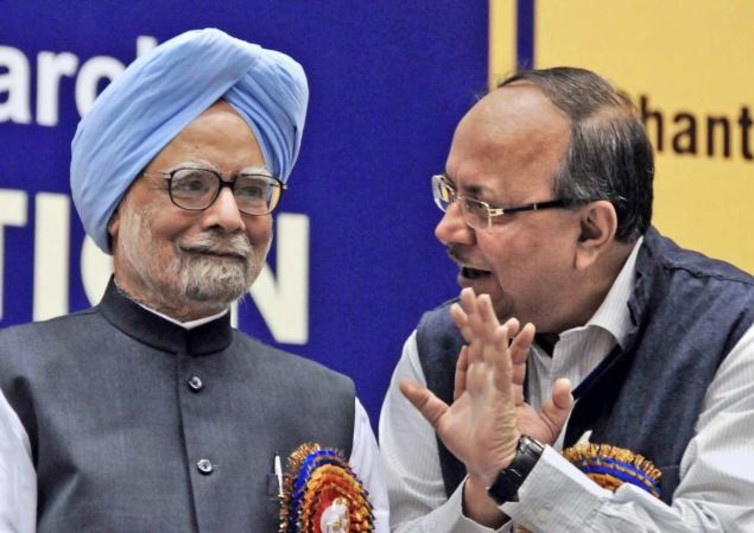 Involving so many people must be difficult.

Yes, you need to share and collaborate at a massive scale. Only open source can deliver the necessary level of confidence and trust. Once all our notes, protocols and findings went open source, we witnessed a profound cultural change. A lot of young students were hungry for science and wanted to contribute. We gave them wings.

A second challenge was to create a virtual laboratory for suggesting and screening drug targets. After creating an open source inventory of existing pharma facilities, we then used chemicals to synthesise more than 2,000 molecules (all this for less than US$500,000).

The third and biggest challenge was to actually build, in silico [via computer simulation], a system biology model of Mycobacterium tuberculosis. The “simple” organism still has 50 pathways, 890 genes, 1,152 metabolic reactions involving 961 metabolites. But we made it! We also identified 33 novel targets for multiple drug-resistant TB as well as Metformin, a Type II diabetes drug.

What is the future of open-pharma and the OSDD?

S.B.: Today, an open source in silico model exists that can be used for any other organism, not just Mycobacterium tuberculosis. This offers a framework for drug design targeting other neglected disease. OSDD is now globalised – no longer a project but a movement. I think my job is done!