The U.S.-Colombia drug war alliance has failed to stop the country’s drug trade, with last year’s coca yield breaking records. The record harvests can be traced to the country’s government, right-wing paramilitaries and wealthy individuals who are sympathetic to U.S. business interests. 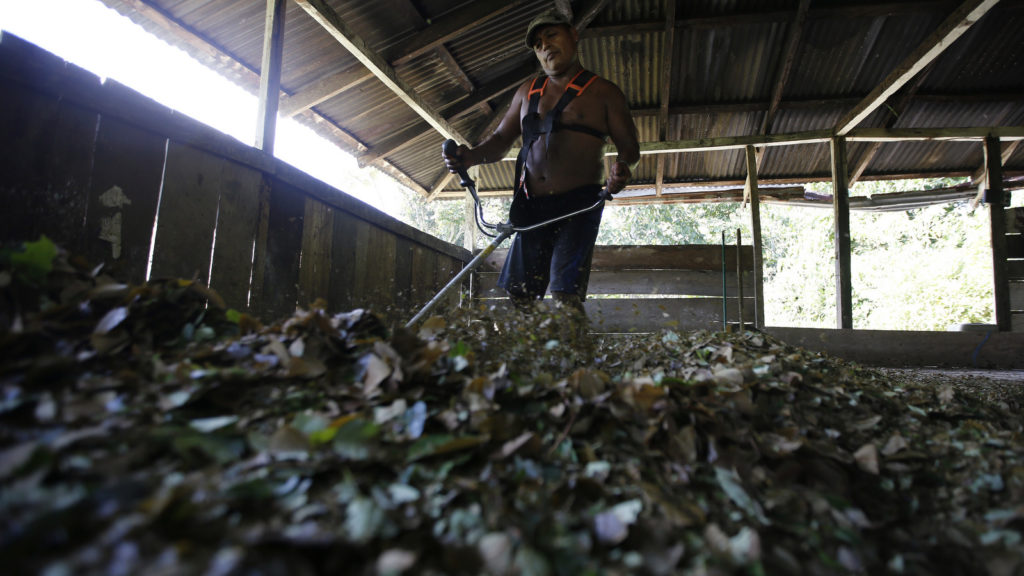 A man mulches coca leaves with a weed eater at a small makeshift lab in Puerto Bello, Colombia. Coca cultivation surged last year and now covers more territory than it did when a multibillion U.S.-led eradication campaign began 16 years ago. (AP/Fernando Vergara)

20 Jul 2017– Ever since Colombia descended into civil war more than 50 years ago, the country’s notorious drug trade has largely been blamed on the leftist insurgency, the Revolutionary Armed Forces of Colombia (FARC), rather than the government-connected right-wing paramilitaries who have also sold illegal drugs to fund their operations.

The habit of laying the lion’s share of the blame at FARC’s feet came into its own following Colombia’s partnership with the United States in the latter’s war on drugs, particularly when the highly-publicized alliance failed to make any headway in halting cocaine production.

Official cooperation between the two nations began in 1999, when then-President of Colombia Andrés Pastrana Arango showed he was willing to cooperate in the U.S.’ drug war by endorsing a U.S.-funded aerial fumigation program in which glyphosate was indiscriminately sprayed on small family farms in areas that were allegedly producing cocaine. Years later, it emerged that glyphosate, a Monsanto product, is a likely carcinogen.

Related: Colombia To Return  To Attacking Coca With Glyphosate

But now, the FARC-blaming narrative is falling apart, exposing the uncomfortable truths of Colombia’s drug trade and the decades-long conflict that has come with it. According to the United Nations, Colombia’s cocaine crop yield for last year broke all previous records, increasing by 50 percent from the year prior – which was itself a record-breaking year.

However, as part of a highly-publicized peace deal between FARC and the government – which even netted Colombia’s current president a Nobel Peace Prize – FARC gave up their role in the drug trade following the finalization of the deal last year. Thus, this record-breaking cocaine yield cannot be traced back to FARC alone.

The Colombian government has also been intimately involved, particularly during the presidency of Alvaro Uribe, who allegedly served as the “head of Colombia’s paramilitary groups” both before and while in office. Uribe was once ranked by the U.S. Defense Intelligence Agency as number “82 on a list of 104 important narco-traffickers contracted by the Colombian narcotics cartels.”

There are also indications of the U.S. government’s own involvement in the Colombian cocaine trade. Colombia’s most notorious drug trafficker, Pablo Escobar, at one point worked for the U.S. Central Intelligence Agency, according to Escobar’s own children. Escobar allegedly sold cocaine for the CIA to help the U.S. government finance its fight against communism and left-wing governments in Latin America.

As pointed out in the book “Cocaine, Death Squads and the War on Terror: U.S. Imperalism and Class Struggle in Colombia,” the U.S.’ anti-drug efforts in Colombia were never intended to eradicate cocaine, but instead alter the market share by ensuring that allies of the U.S. in Colombia – the Colombian government, paramilitaries and the wealthy elite who are favorable to U.S. business interests – could monopolize the drug trade with no competition from outsiders. Now, with FARC out of the picture, the true end game of the U.S.-Colombia drug war alliance is becoming harder to cover up.