Researchers talk of ‘biological annihilation’ as study reveals billions of populations of animals have been lost in recent decades.

‘The lion was historically distributed over most of Africa, southern Europe and the Middle East. Now the vast majority of lion populations are gone.’
Photograph: Xinhua/Barcroft Images

10 Jul 2017 – A “biological annihilation” of wildlife in recent decades means a sixth mass extinction in Earth’s history is under way and is more severe than previously feared, according to research.

Scientists analysed both common and rare species and found billions of regional or local populations have been lost. They blame human overpopulation and overconsumption for the crisis and warn that it threatens the survival of human civilisation, with just a short window of time in which to act.

The study, published in the peer-reviewed journal Proceedings of the National Academy of Sciences, eschews the normally sober tone of scientific papers and calls the massive loss of wildlife a “biological annihilation” that represents a “frightening assault on the foundations of human civilisation”.

Prof Gerardo Ceballos, at the Universidad Nacional Autónoma de México, who led the work, said: “The situation has become so bad it would not be ethical not to use strong language.”

Previous studies have shown species are becoming extinct at a significantly faster rate than for millions of years before, but even so extinctions remain relatively rare giving the impression of a gradual loss of biodiversity. The new work instead takes a broader view, assessing many common species which are losing populations all over the world as their ranges shrink, but remain present elsewhere.

The scientists found that a third of the thousands of species losing populations are not currently considered endangered and that up to 50% of all individual animals have been lost in recent decades. Detailed data is available for land mammals, and almost half of these have lost 80% of their range in the last century. The scientists found billions of populations of mammals, birds, reptiles and amphibians have been lost all over the planet, leading them to say a sixth mass extinction has already progressed further than was thought.

Billions of animals have been lost as their habitats have become smaller with each passing year.

The scientists conclude: “The resulting biological annihilation obviously will have serious ecological, economic and social consequences. Humanity will eventually pay a very high price for the decimation of the only assemblage of life that we know of in the universe.”

They say, while action to halt the decline remains possible, the prospects do not look good: “All signs point to ever more powerful assaults on biodiversity in the next two decades, painting a dismal picture of the future of life, including human life.”

Wildlife is dying out due to habitat destruction, overhunting, toxic pollution, invasion by alien species and climate change. But the ultimate cause of all of these factors is “human overpopulation and continued population growth, and overconsumption, especially by the rich”, say the scientists, who include Prof Paul Ehrlich, at Stanford University in the US, whose 1968 book The Population Bomb is a seminal, if controversial, work.

“The serious warning in our paper needs to be heeded because civilisation depends utterly on the plants, animals, and microorganisms of Earth that supply it with essential ecosystem services ranging from crop pollination and protection to supplying food from the sea and maintaining a livable climate,” Ehrlich told the Guardian. Other ecosystem services include clean air and water.

“The time to act is very short,” he said. “It will, sadly, take a long time to humanely begin the population shrinkage required if civilisation is to long survive, but much could be done on the consumption front and with ‘band aids’ – wildlife reserves, diversity protection laws – in the meantime.” Ceballos said an international institution was needed to fund global wildlife conservation.

The research analysed data on 27,500 species of land vertebrates from the IUCN and found the ranges of a third have shrunk in recent decades. Many of these are common species and Ceballos gave an example from close to home: “We used to have swallows nesting every year in my home near Mexico city – but for the last 10 years there are none.”

The researchers also point to the “emblematic” case of the lion: “The lion was historically distributed over most of Africa, southern Europe, and the Middle East, all the way to northwestern India. [Now] the vast majority of lion populations are gone.”

Current and Historic Distribution of Lions 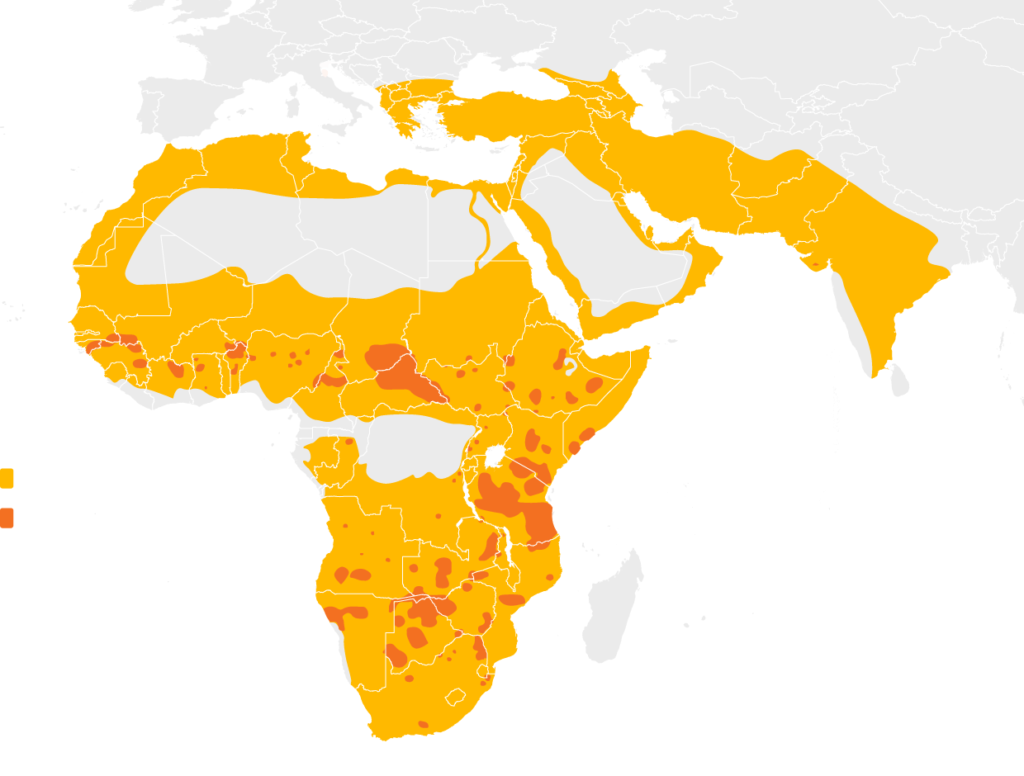 Historically lions lived across Africa, southern Europe, the Middle East, all the way up to Northwestern India [YELLOW]. Today their habitat has been reduced to a few tiny pockets of the original area [DARKER].
Guardian graphic | Source: PNAS

Historically lions lived across Africa, southern Europe, the Middle East, all the way up to Northwestern India. Today their habitat has been reduced to a few tiny pockets of the original area.

Prof Stuart Pimm, at Duke University in the US and not involved in the new work, said the overall conclusion is correct, but he disagrees that a sixth mass extinction is already under way: “It is something that hasn’t happened yet – we are on the edge of it.”

Robin Freeman, at the Zoological Society of London, UK, said: “While looking at things on aggregate is interesting, the real interesting nitty gritty comes in the details. What are the drivers that cause the declines in particular areas?”

Freeman was part of the team that produced a 2014 analysis of 3000 species that indicated that 50% of individual animals have been lost since 1970, which tallies with the new work but was based on different IUCN data. He agreed strong language is needed: “We need people to be aware of the catastrophic declines we are seeing. I do think there is a place for that within the [new] paper, although it’s a fine line to draw.”

Citing human overpopulation as the root cause of environmental problems has long been controversial, and Ehrlich’s 1968 statement that hundreds of millions of people would die of starvation in the 1970s did not come to pass, partly due to new high-yielding crops that Ehrlich himself had noted as possible.

Ehrlich has acknowledged “flaws” in The Population Bomb but said it had been successful in its central aim – alerting people to global environmental issues and the the role of human population in them. His message remains blunt today: “Show me a scientist who claims there is no population problem and I’ll show you an idiot.”

A severe ice age led to sea level falling by 100m, wiping out 60-70% of all species which were prominently ocean dwellers at the time. Then soon after the ice melted leaving the oceans starved of oxygen.

The big one – more than 95% of species perished, including trilobites and giant insects – strongly linked to massive volcanic eruptions in Siberia that caused a savage episode of global warming.

Three-quarters of species were lost, again most likely due to another huge outburst of volcanism. It left the Earth clear for dinosaurs to flourish.

An giant asteroid impact on Mexico, just after large volcanic eruptions in what is now India, saw the end of the dinosaurs and ammonites. Mammals, and eventually humans, took advantage.

Earth has lost half of its wildlife in the past 40 years, says WWF