It was the left who diagnosed the ills of globalization. So why is the right eating our lunch? 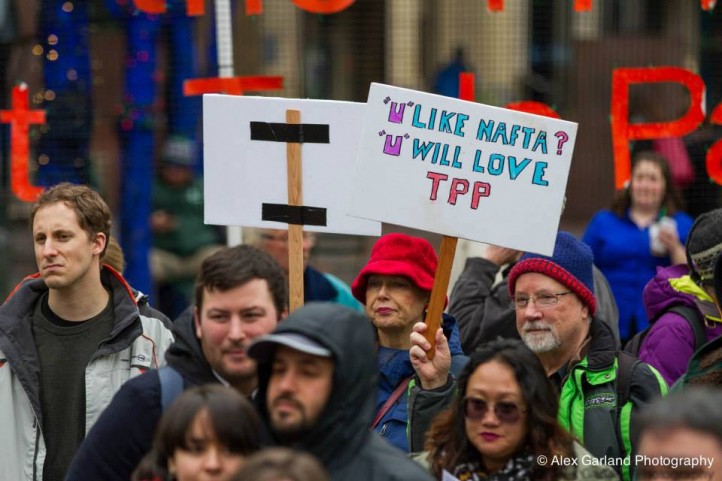 19 Jul 2017 – Free trade and the freedom of capital to move across borders have been the cutting edge of globalization. They’ve also led to the succession of crises that have led to the widespread questioning of capitalism as a way of organizing economic life — and of its paramount ideological expression, neoliberalism.

The protests against capitalism at the recent G20 meeting in Hamburg may seem superficially the same as those which marked similar meetings in the early 2000s. But there’s one big difference now: Global capitalism is in a period of long-term stagnation following the global financial crisis. The newer protests represent a far broader disenchantment with capitalism than the protests of the 2000s.

Yet capitalism’s resilience amidst crisis must not be underestimated. For trade activists, in particular, who’ve been on the forefront of the struggle against neoliberalism and globalization over the last two decades, there are a number of key challenges posed by the conjuncture.

First is the surprising strength of neoliberalism.

The credibility of neoliberalism, to which free trade ideology is central, has been deeply damaged by a succession of events over the last two decades, among which were the collapse of the third ministerial of the World Trade Organization in Seattle in 1999, the Asian financial crisis in 1997-98, and the Global financial crisis of 2008-2009, the effects of which continue to drag down the global economy.

Most of us in the field remember the time late in 2008, when after hearing accounts of the Global financial crisis from an assembly of orthodox economists at the London School of Economics, Queen Elizabeth posed the question: “Why didn’t anybody see this coming?” None of the dumbfounded economists could answer her then — and last I heard, the queen is still waiting for the answer.

What one finds puzzling is despite this loss of credibility, neoliberalism continues to rule. Academic economists continue to teach it, and technocrats continue to prescribe it. The false assumptions of free trade theory underlie the free trade agreements or economic partnership agreements into which the big powers continue to try to rope developing countries.

To borrow an image from the old western films, the train engineer has been shot and killed, but his dead hand continues to push down on the throttle, with the train gathering more and more speed. The takeaway from this is that so long as there are interests that are served by an ideology, such as corporate interests and knowledge institutions that have invested in it, even a succession of devastating crises of credibility isn’t enough to overthrow a paradigm.

Export-led Growth Is Still on Course

The second challenge is especially relevant to developing countries. It is the persistence of the model of export-oriented growth.

Now, this model of development through trade is shared both by neoliberals and non-neoliberals — the difference being that the former think it should be advanced by market forces alone and the latter with the vigorous help of the state. Now, over the last few years, the stagnation of the once dynamic centers of the global demand — the U.S., Europe, and the BRICS — has made this model obsolete.

It was, in fact, the non-viability of this once successful model of rapid growth in current global circumstances that pushed China, under Hu Jintao and Wen Jiabao, to push the country away from an export-oriented path to a domestic demand-led strategy via a massive $585 billion stimulus program. They failed, and the reason for their failure is instructive.

In fact, a set of powerful interests had congealed around the export-oriented model — the state banks, regional and local governments that had benefited from the strategy, export-oriented state enterprises, foreign investors — and these prevented the model from being dislodged, even given its unsuitability in this period of global stagnation.

These same policy struggles are going on in other developing countries. In most cases, the outcome is the same: The export lobbies are winning, despite the fact that the global conditions sustaining their strategy are vanishing.

The Right Eats Our Lunch

A third challenge has to do with the fact that when major changes in trade policy do take place, it’s not because of the actions of progressive groups but of demagogues of the right. I think this is clearest in the case of the United States.

It was Donald Trump who shot down the Trans-Pacific Partnership (TPP) that had been the object of so much criticism coming from the left. Trump may be a demagogue and his motives may be opportunistic, but it was he who came through on one of the central demands of U.S. labor — not the Democrats — with the consequence that he’s been able to win over large parts of the white working class.

In Europe, working classes are moving to right wing parties in significant numbers as well, not only owing to a racist response to immigration, but also because these far-right parties are espousing anti-globalization and anti-free trade rhetoric. As in the case with the Democrats in the U.S., the Social Democrats in Europe are identified with financialization and free trade, and this is a central reason for their loss of credibility.

But it was the non-establishment left, the left of social movements, that began and developed the critique of globalization, neoliberalism, and free trade in the 1990s and the 2000s. But for a variety of reasons, we weren’t able to translate our politics into an effective movement. The extreme right, on the other hand, opportunistically expropriated our message, rebranded themselves as anti-neoliberals opposed to the center-right as well as the center-left, and now they’re eating our lunch.

The final challenge has to do with coming up with a credible alternative paradigm.

My first two points stressed the importance of powerful interests in sustaining a paradigm despite its loss of intellectual credibility. But this isn’t sufficient to explain the continuing powerful influence of neoliberalism. Our failure to move from a critique of neoliberal capitalism to a powerful alternative model — like socialism provided to so many marginalized classes, peoples, and nations in the 20th century — is part of the problem.

The theoretical building blocks of an alternative economic model are there, the product of the work of so many progressives over the last 50 years. This includes the rich work that has been done around sustainable development, de-growth, and de-globalization. The task is to integrate them not only into an intellectually coherent model, but into an inspiring narrative that combines vision, theory, program, and action, and one that rests firmly on the values of justice, equity, and environmental sustainability.

Of course, the work towards this goal will be long and hard. But we must not only be convinced that it’s necessary but also confident that it’s possible to come up with an alternative that will rally most of the people behind us. Ideas matter. To borrow the old biblical saying, “Without vision, the people perish.”

These are some of the central challenges confronting trade activists. We cannot leave the field to a neoliberalism that has failed or to an extremism that has appropriated some of our analysis and married them to hideous, reactionary values.

A progressive future is not guaranteed. We must work to bring it about, and we will.

Walden Bello was, until recently, a member of the House of Representatives of the Philippines. He is the author of many books and articles on U.S. political, military, and economic relations with Asia. Bello is an expert on the World Trade Organization and global trade, senior analyst at the Philippine think-tank Focus on the Global South, and TNI fellow. He was the principal author of A Siamese Tragedy: Development and Disintegration in Modern Thailand (London: Zed Press, 1998). Bello did his doctoral dissertation on the counterrevolution in Chile in 1970-73. He is currently senior research fellow at the Center for Southeast Asian Studies of Kyoto University.