New institute in Germany aims to give artists a space to ‘reinvent’ the image of the 12 million Roma people in Europe. 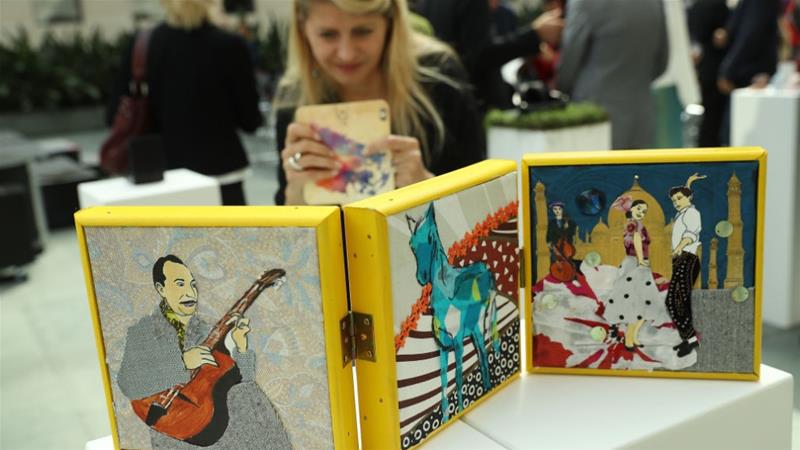 The small individually crafted plaster homes were part of a protest meant to express Kazanxhiu’s frustration that 60 Roma families in the Albanian capital of Tirana had been displaced one year prior and still lacked durable, permanent housing.

Nearly three years later, the families remain in the temporary unsolicited caravan homes provided by an NGO. But some of Kazanxhiu’s small protest plaster houses have found a permanent place with the recently-launched European Roma Institute for Arts and Culture (ERIAC) in Berlin, Germany.

The Institute, the first of its kind for Europe’s 12 million Roma, was launched in June at the German foreign ministry and will have a permanent space in Berlin in the fall.

READ MORE: Roma in Kosovo – ‘My children are poisoned by lead’

The Roma, or Romani people, make up Europe’s largest minority group. They were once nomadic and are believed have arrived in Europe from northern India a thousand years ago. Today, many live in poverty and are often on the margins of society.

“The Romani people never had an institution to cultivate and stimulate the Romani culture,” Kazanxhiu tells Al Jazeera at ERIAC’s launch event.

“The only institution that we had was our families. We couldn’t read about ourselves in books; in literature, we would find only stereotypes. Finally, we will have an institution to stimulate Romani culture, art and language.” 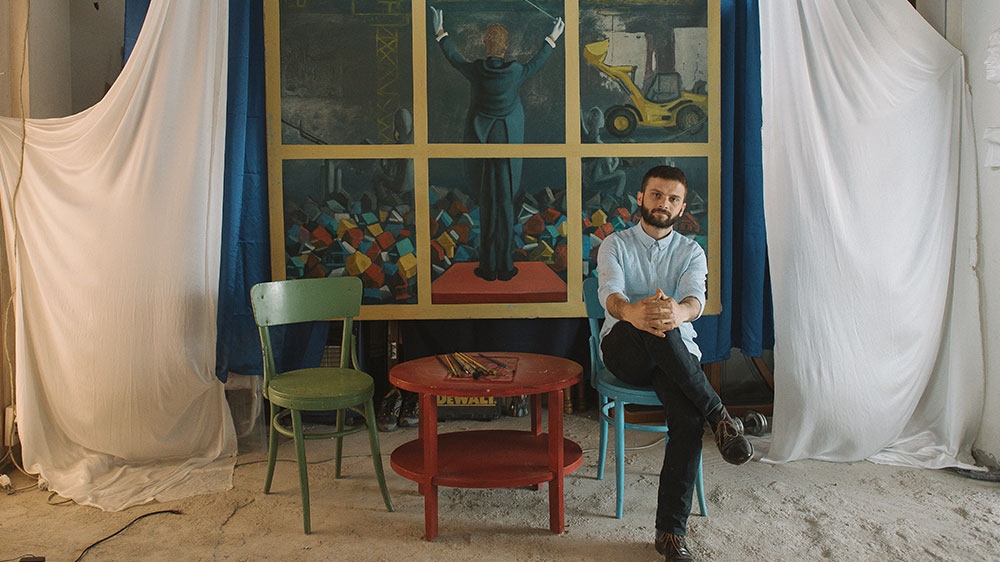 Sead Kazanxhiu is the youngest member of the coalition for ERIAC.
[Bevis Fusha/Courtesy of the Open Society Foundations]

Kazanxhiu, 29, was born shortly after the death of Stalinist dictator Enver Hoxha and grew up as capitalism was first introduced in Albania.

In primary school, he walked 10km from his small Roma village several times a week to attend art classes after one his teachers noticed his talent for drawing.

Today, Kazanxhiu is the youngest member of the coalition for ERIAC, which has worked for four years with the Council of Europe, billionaire philanthropist George Soros’ Open Society Foundations, and the German foreign ministry to open the centre.

“We all believe ERIAC comes at a moment when Europe and her institutions are in crisis,” Kazanxhiu told a crowd gathered to celebrate the launch of the centre.

“The old monsters like xenophobia and extremism are unveiling at a strong scale,” he said in his native language, Romanes.

“Many of these monsters are trying to say that we have no place in Europe, but now we will show them how much we have given Europe. We have been living here on this continent for almost 700 years!”

Kazanxhiu’s work often focuses on the theme that the Romani people are spread across Europe.

In a piece of performance art titled, “A choice to be made, a price to be paid”, Kazanxhiu mashes “shishik”, a type of clay that is indigenous to his hometown, into a pulp. He then mixes it with water and heats it over a gas flame. While the audience sits in suspense, he undresses, puts on a suit, and uses the clay mixture to write “Romani phuv,” or “Romani land,” on the wall before he walks off the stage without saying a word.

Kazanxhiu says that the piece was inspired by the late Romanian Roma activist Nicolae Gheorghe, who wrote that the concept of Romani land is a “controversial issue that implies different prices to be paid when decisions have to be made”. 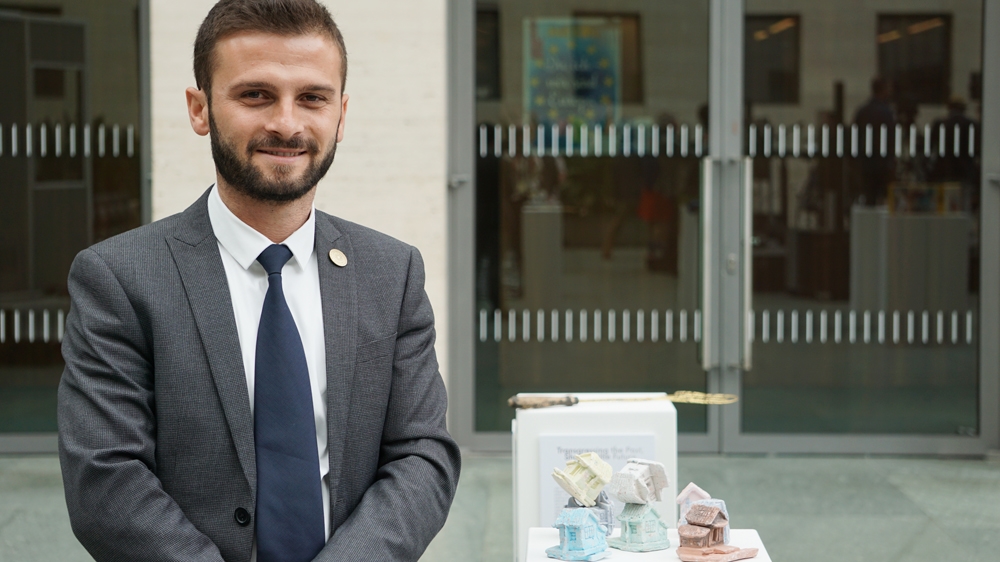 For Kazanxhiu, the idea of Romani land does not represent a physical territory, but a cultural one.

“For me, Romani land is Europe,” he says, adding that he hopes ERIAC will become a kind of cultural territory for the Roma.

“Institutionalising Romani culture will bring a different perception to discussions about territory. Europeans and the world have to learn from Roma how to focus more on culture, rather than borders or territories.”

The refugee crisis and the new borders being raised in Europe have prompted Kazanxhiu to expand his oeuvre to include solidarity with refugees and displaced people.

In another recent piece titled, “The floor is yours”, he used a traditional Romani style of weaving to create a lectern made out of barbed wire.

The podium is a symbol of unassailable power that, as historian Shannon Woodcock writes, “invokes the European borders fenced against Syrian and Hazara refugees, the camps of the Holocaust, and of fascist, socialist and capitalist dictators of the past and present”.

‘A reinvention of the Roma image’

Kazanxhiu’s work exemplifies the type of art ERIAC will promote, and the spirit that Timea Junghaus, the centre’s new leader, seeks to support the next generation of Romani artists.

“It is important that Sead uses these houses, because what I have is this very pretty little exhibition, that looks very elegant on these white pedestals, but the truth is that if you go close to these pedestals, I have quite subversive material,” Junghaus, told Al Jazeera on the eve of the ERIAC launch event.

Junghaus, Hungary‘s first Roma art historian, began her work as a curator focusing on and promoting Roma-made art after studying art history and finding that the images of her community were created by the majority culture.

“I was shocked to learn that while state archives own more than 10,000 works by Roma, only one is permanently exhibited,” she said. That piece of art hangs in the Roma parliament in Budapest.

“The past four decades taught us that simply depending on the benevolence of majority museums for Roma representation is unreliable and inefficient,” she said. “I hope I can participate in the reinvention of the Roma image.” 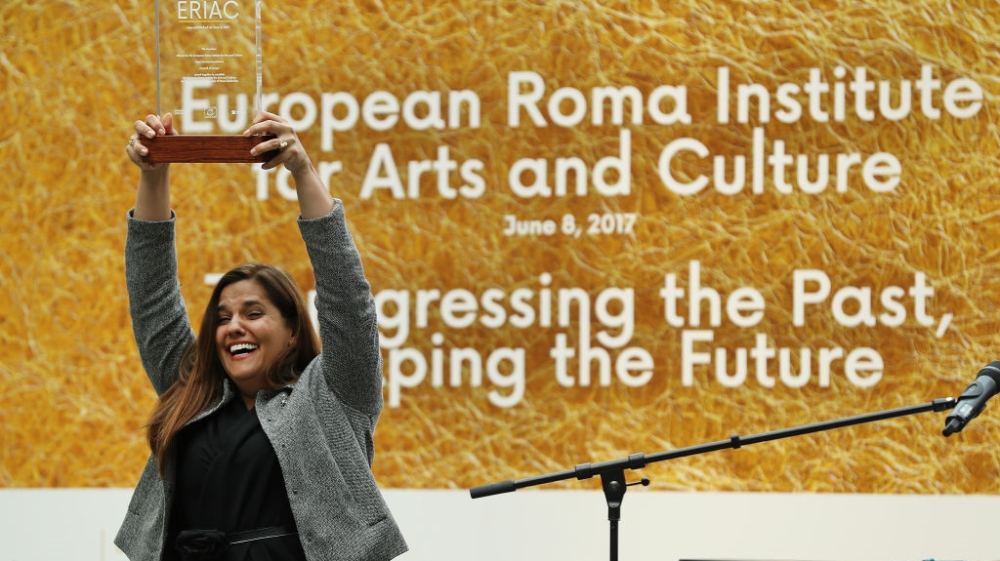 Junghaus has spent much of her career working to promote and foster Roma art. She researched the decades-long process that eventually led to the construction of a memorial in Berlin to the 500,000 Roma killed in the Holocaust.

In 2007, she curated the first Roma Pavilion at the Venice Biennale, which is known as the “Olympics of the art world”. The exhibit was an opportunity to promote work by Roma artists on an international stage.

The pavilion was a major step for Roma artists, she said, but ERIAC represents the realisation of a dream that was first articulated by Roma leaders in 1919, and then again on a global scale in the 1970s when a group of prominent intellectuals sought a permanent space that would showcase and promote Roma culture.

“The first Roma Pavilion was an attempt to decolonise the Roma sphere and now we want to transgress even further,” she said.

“After the resistance that previous generations have done, we are making ourselves anew,” she added, paraphrasing the feminist cultural critic and author Bell Hooks. 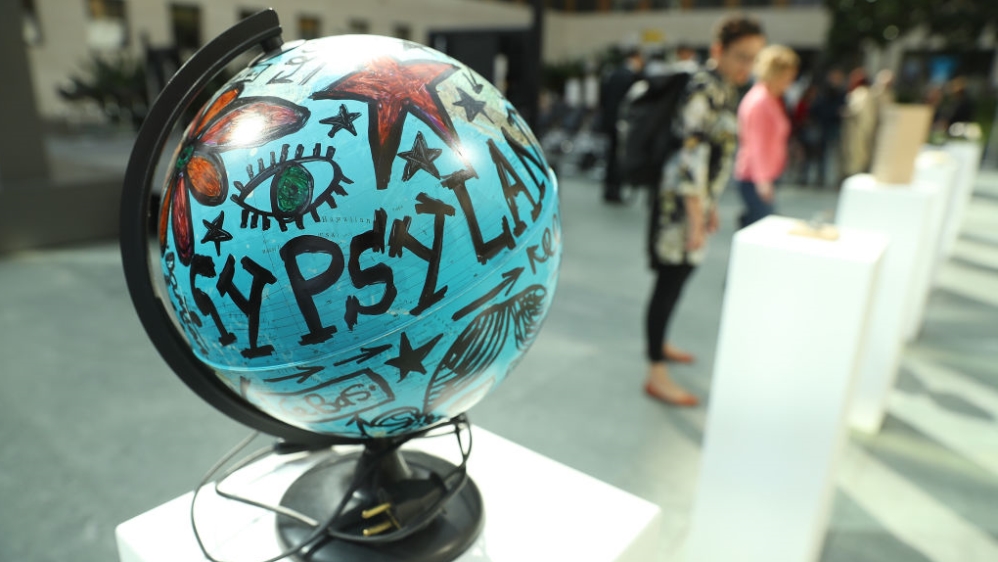 Junghaus believes artists like Kazanxhiu can help the image of Roma evolve.

“Sead brings this trans-generational knowledge,” she said. “He is transgressing the past, getting out of the position of the victim and stepping into this new framework of consciousness, resistance and survival.”

Jungahus said this is especially important as far-right anti-Roma groups increase their support base across Europe today.

“Anti-gypsyism is rising,” she said. “We are really at the last second if we want to preserve our humanity and power of recognition of minority cultures in present-day Europe.”

She added, however, that “while far-right sentiments and neo-Nazism and anti-gypsyism are rising, some level-headed thinkers in Europe still know well that for the prosperity of and stability of Europe, the well-being and recognition of the largest minority is a basic condition.”