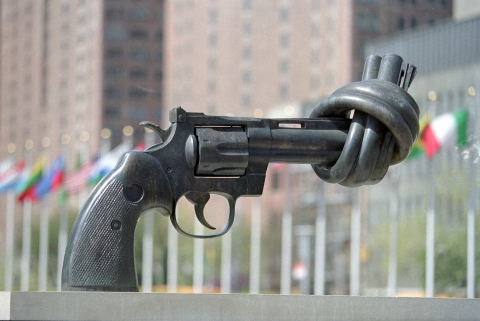 12 Jul 2017 – More than seven decades after the deployment of deadly atomic bombs in Japan, the UN has passed a historic treaty banning nuclear weapons around the world. Though it has sparked hope for a future without nuclear weapons, uncertainty in the success of the treaty still lingers.

More than 122 countries, representing two-thirds of the 192-member UN, adopted the historic treaty banning nuclear weapons after months of talks.

“We have managed to sow the first seeds of a world free of nuclear weapons…the world has been waiting for this legal norm for 70 years,” said Elayne Whyte Gomez, Permanent Representative of Costa Rica and the president of the UN conference which negotiated the treaty.

Nuclear Disarmament Program Manager for the civil society organization PAX Susi Snyder similarly highlighted the importance of the occasion to IPS, stating: “People have been working for decades on the issue, myself included, and to have a moment that you know, to the very tips of your toes, that history is being made? That’s a moment to feel all the feelings.”

There are approximately 15,000 nuclear warheads globally, more than 90 percent of which belong to the United States and Russia.

Unlike the 1968 Treaty on the Non-Proliferation of Nuclear Weapons (NPT) which allowed five countries to possess such arms, the new instrument is an explicit prohibition on the direct or indirect use, threat of use, possession, acquisition, and development of nuclear weapons.

It also for the first time includes obligations to provide assistance to victims of nuclear weapons testing and use as well as environmental remediation of areas contaminated a result of nuclear weapon activities.

“This normative treaty highlights the humanitarian consequences of nuclear weapons—it is a huge achievement especially for the Hibakusha, the survivors of Hiroshima and Nagasaki,” Arms Control Association’s (ACA) Researcher Alicia Sanders-Zakre told IPS.

Though the awareness of nuclear weapons’ devastating humanitarian ramifications is certainly not new, both Snyder and Sanders-Zakre noted that states still legitimize nuclear weapons in their security approaches.

“Some states negotiating the treaty would say that by having a security doctrine of nuclear deterrence, nuclear weapons states legitimize nuclear weapons and distract from their humanitarian consequences…which are often not in the forefront of the security stage,” said Sanders-Zakre.

The new treaty aims to strip nuclear weapons of their prestige by making them unacceptable under international law.

Not Without a Fight

The world’s nine nuclear-armed states as well as the majority of the North Atlantic Treaty Organisation’s (NATO) members boycotted the negotiations, except for the Netherlands which voted against the document.

Among the most vocal critics is the United States who, since the beginning of the talks, said that the process was not “realistic,” especially in the wake of rising tensions between the North American nation and North Korea.

“There is nothing I want more for my family than a world with no nuclear weapons, but we have to be realistic. Is there anyone who thinks that North Korea would ban nuclear weapons?” asked U.S. Ambassador to the UN Nikki Haley.

In a joint statement, the U.S., United Kingdom, and France announced that they do not ever intend to sign, ratify, or become party to the treaty.

“A purported ban on nuclear weapons that does not address the security concerns that continue to make nuclear deterrence necessary cannot result in the elimination of a single nuclear weapon and will not enhance any country’s security, nor international peace and security,” they stated, reiterating their continued commitment to the NPT.

Snyder told IPS that it was not surprising that such nations did not participate due to a desire to retain the political power associated with nuclear weapons. However, she criticised the joint move as it may be in violation of the NPT.

Article 6 of the NPT, which the majority of member States have signed, states that each party must “pursue negotiations in good faith on effective measures relating to cessation of the nuclear arms race at at an early date and to nuclear disarmament.”

Snyder noted that negotiations were considered by the majority to be an “effective measure” in the pursuit of disarmament.

“While this prohibition is not the final effort to achieve and maintain a nuclear weapons free world, it is certainly a key element of a world without nuclear weapons. It was an absence that is embarrassing for the nuclear armed states, demonstrating their commitment to inhumane weapons over humanity,” she continued.

However, nuclear-armed nations would argue that they are not violating the NPT as they do not consider that the prohibition will result in the elimination of nuclear weapons and is thus not an “effective measure,” said Sanders-Zakre.

The treaty reflects a growing divide between nuclear and non-nuclear weapon states on visions of disarmament.

Between a Nuke and a Hard Place?

Additional frustrations have arisen concerning the treaty’s prohibition on the stationing, installation or deployment of nuclear weapons on territories as it puts many NATO members in nuclear sharing agreements in a sticky situation.

Five nations, including Germany and Turkey, currently host U.S. nuclear weapons as part of NATO’s nuclear sharing policy. In order for NATO members to join, they will have to reverse or withdraw from their obligations.

But can a nuclear ban treaty be successful without such nations?

“The treaty sets a norm, and the nuclear armed states have a history of following norms even when they don’t sign up to the treaties behind them,” said Snyder, referencing the Comprehensive Nuclear-Test-Ban Treaty (CTBT) which, despite not being ratified by all nations and not entering into force, has set a norm in which nuclear testing is condemned.

“That norm will grow from this treaty as well, and will likely result in ongoing substantive condemnation of the activities of the nuclear armed states that are not disarmament,” Snyder continued.

Sanders-Zakre noted that there might be some obstacles in the way before the treaty’s entry into force, including potential lobbying by nuclear weapon states to dissuade others from ratifying the instrument or a general decrease in political momentum.

But, with or without the nuclear weapon states, the treaty will mark a significant normative step towards disarmament if all 122 states which negotiated the instrument sign and ratify.

“My hope is that this treaty will be the first step towards more productive disarmament dialogue, and that it will serve as a wake-up call to nuclear weapon states that have not seriously been pursuing disarmament negotiations for quite some time,” Sanders-Zakre said.

Snyder similarly described the historic occasion as the first step of many, stating: “This treaty will help towards the elimination of nuclear weapons—it’s not the last thing that will get them out of the world forever, but it helps by reaffirming the complete illegitimacy of such inhumane weapons and offers a pathway for elimination.”

The treaty on the prohibition of nuclear weapons will be open for signature by member states on 20 September, marking the beginning of the 72nd Session of the General Assembly. It will enter into legal force 90 days after it has been ratified by 50 countries.

Earlier this year, atomic scientists set the Doomsday Clock to two and a half minutes before midnight, reflecting a fear that the world is closer to a nuclear disaster than it has been since 1953 after the U.S. and Soviet Union tested hydrogen bombs.