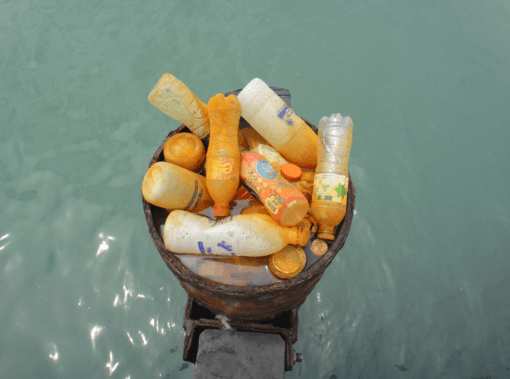 Plastic is not recycled.

28 Jul 2017 – One of the great myths of modern-day society is that people recycle in earnest… saving the environment. Au contraire! Check out the ocean. It’s filled with plastic. Fish and seabirds eat it by gobs and gobs. Furthermore, according to a World Economic Forum presentation, The New Plastics Economy: Rethinking the Future of Plastics, February 2016, by 2050 there will likely be more plastic than fish in the seas, unless socio-economic policies change drastically. But, where’s the leadership?

Only recently National Geographic magazine posted news about a new discovery of massive quantities of plastic in the Pacific Ocean, July 25th, 2017, entitled: Plastic Garbage Patch Bigger Than Mexico Found in Pacific, stating, “Yet another floating mass of microscopic plastic has been discovered in the ocean, and it is mind-blowingly vast.”

The magazine also shatters the myth that people recycle, in earnest. According to the article, “a whopping 91% of plastic isn’t recycled,” which lends tremendous credence to the prediction at the World Economic Forum that the seas will carry more plastic than fish.

Consider the Great Acceleration, epitomized by plastic’s exponential growth, does not hesitate, onwards and upwards, production and profits, Wall Street and Trump, prosperity only hopefully, but not for most, for as long as the planet holds up… cough, ahem!

The focus of scientific research on plastic destructiveness prompts analyses “how much plastic has been produced, discarded, burned or put in landfills… horrified by the sheer size of the numbers.” (Source: Laura Parker, A Whopping 91% of Plastic Isn’t Recycled, National Geographic, July 19, 2017.)

Even more breathtakingly yet: “Plastic takes more than 400 years to degrade, so most of it still exists in some form.” Following the dictum that “you can’t manage what you don’t measure,” scientists set out over two years ago to study the issue. The results published just last week a landmark study in the peer-reviewed journal Science Advances. It is the first ever global-wide analysis, and hands down, it is sobering. (Source: Roland Geyer, et al, Production, Use, and Fate of All Plastics Ever Made, Science Advances, Vol. 3, No. 7, July 19, 2017.)

For example, according to the study, of the 8.3 billion metric tons produced so far, 6.3 billion metric tons is now waste product, and of that, only 9% has been recycled. Yes Mr. and Mrs. Green of the World your recycling efforts are not totally for naught but seriously challenged in the worst possible fashion, people don’t really care that much, and that is a tragedy in a world filled with instant recognition of everything and anything bad or good, except for incessant care of the planet. (Oh yeah, by the way, the Environmental Protection Agency “EPA” and the National Oceanic and Atmospheric Administration “NOAA” are now subject t0 unprecedented slash and burn politics. A huge sharpened axe overhangs our only biosphere under the raging influence of a rebirth of primitive Neolithic thought.)

The Great Acceleration, humans reshaping the ecosystem by displacing nature, is handily at work. Here’s proof: Half of the ingredients used to produce plastic have been produced over the last 13 years. That’s great acceleration, and then some. Not only that, half of all plastic becomes trash within a year. That’s acceleration of usage. By way of contrast, most of the steel produced still supports structures.

According to Jenna Jambeck, University of Georgia, environmental engineer specializing in ocean plastic waste, the U.S. is a distant third in recycling at a measly (9%) behind Europe (30%) and China (25%). As for U.S, environmental concerns/morals, Americans salute and flag wave and honor the country like America is great but at what?

According to National Geographic: “The problem of plastic pollution is becoming ubiquitous in the oceans, with 90 percent of sea birds consuming it and over eight million pounds of new plastic trash finding its way into the oceans every year.”

In the 1960s plastic was found in the stomachs of fewer than 5% of seabirds. By 1980 it jumped to 80%, now 90%. What’s left? National Geographic says that seabird populations dropped 67% between 1950 and 2010 but without a clear understanding of why. It is under study. Is plastic one of the threats to seabirds? We’ll find out in due course but likely too late for far too many.

Indeed, plastic trash is ubiquitous. Uninhabited Henderson Island in the South Pacific, a United Nations World Heritage site and one of the world’s biggest marine reserves described by UNESCO as “a gem and one of the world’s best remaining examples of coral atoll, practically untouched by human presence,” has the world’s highest density of trash, according to National Geographic. It’s a record-setter.

Henderson’s sandy white beaches carry the signatures of Russia, the U.S., the Philippines, the EU, Brazil, Japan, Malaysia, China, Indonesia, and so forth. All of it is trash, mostly plastic via the South Pacific gyre, which is a circular ocean current that moves water like a conveyor belt and collects trash along the way to the garbage dump Henderson Island at the rate of 3,500 pieces every day or 105,000 pieces monthly and still increasing.

Fortunately, the South Pacific’s Henderson Island is uninhabited. People would be completely overwhelmed.

Robert Hunziker lives in Los Angeles and can be reached at roberthunziker@icloud.com