Salafism vs. Wahhabism: Qatar and Saudi Arabia’s Proxy War Rages in Syria Thanks to US Militarism

Salafi jihadist scholar Abdullah al-Muhaysini is one of many agents working on behalf of Qatar to combat Saudi Arabia’s Wahhabist ideology. Their battleground is Syria, where a so-called “civil war” is covering up a silent fight between competing political movements. 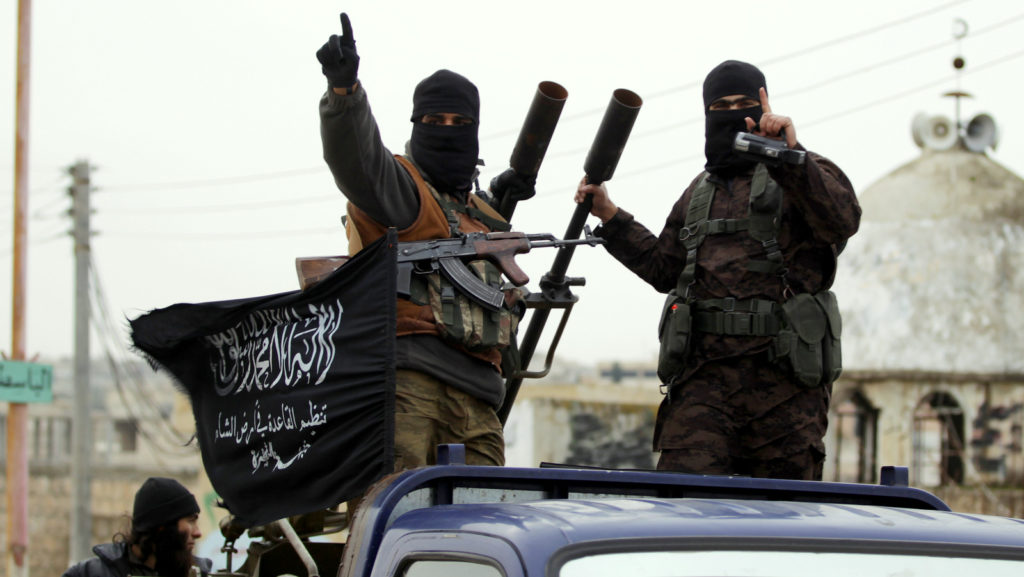 Members of al-Nusra Front gesture as they drive in a convoy touring villages in the southern countryside of Syria’s Idlib province, Decembe, 2014.
(Photo: Khalil Ashawi/Reuters)

30 Jun 2017 – Qatar’s main man operating in Syria is Saudi Arabian Abdullah al-Muhaysini. He is a PhD, having received his doctorate in Islamic law from the Imam Muhammad ibn Saud Islamic University in Riyadh.

On June 16, 2017 al-Muhaysini survived an assassination attempt while leaving the Abu Thar al-Ghafari Mosque in Syria’s Idlib Province, where he has lived since 2013.  Idlib is known as al-Qaeda’s global base, and its borders are controlled by the Turkish government. A suicide bomber targeted him, but al-Muhaysini was not killed; however, approximately ten people were reportedly injured, some seriously.

There is indeed a war going on in Syria, but not the civil war that the mainstream media has covered extensively. No, it is a regional proxy war being actively fought between Qatar and Saudi Arabia on Syrian soil.

So how is it that two closely aligned Gulf states are butting heads?

Saudi Arabia’s state-approved ideology is Wahhabism, a politically-motivated movement  that has its roots in the British colonialism that toppled the Ottoman Empire. It is not a sect of Islam – rather, it’s radical Islam, a political ideology just like communism and capitalism.

Qatar’s state-approved ideology, on the other hand, is the Salafi brand of radical Islam.  There are differences, though both distort Islam to suit their political and regional motivations. This political rift in how Islam should be followed has driven Saudi Arabia and Qatar to support competing groups in Syria at the cost of Syrian lives.

Each party to the Syrian conflict backs a different horse. The U.S. government has sponsored the Free Syrian Army since 2011, when efforts to topple Bashar al-Assad’s government began.  The Saudi King sponsored Zahran Alloush and the Islam Army, while Qatar backed Jabhat al Nusra. The commonality being that all of them have used al-Qaeda troops as assets: in war, you use what you have available.

Before long, Syria’s al-Qaeda branch – the al-Nusra Front – became the fiercest and most successful of the various armed terrorist groups operating in the country. Turkey provided the logistics: the staging ground for various radical Islamic terrorists coming in from the four corners of the world. The U.S. provided the weapons, freshly seized from the Libyan government. Qatar and Saudi Arabia provided cash to make the payrolls of the thousands of mercenaries fighting to topple the secular Syrian government in favor of their perverted, politically motivated versions of sharia law.

Saudi Arabia, Jordan and the CIA have all worked hand-in-hand to support the terrorists attacking Syria from the south. In the north, Qatar and Turkey are working together to support terrorists attacking Syria as well. The Syrian “civil war” is not between Syrians, but is a “north versus south” war waged inside Syria between Saudi Arabian allies (the U.S., Jordan and the UAE) and Qatar with its ally Turkey. 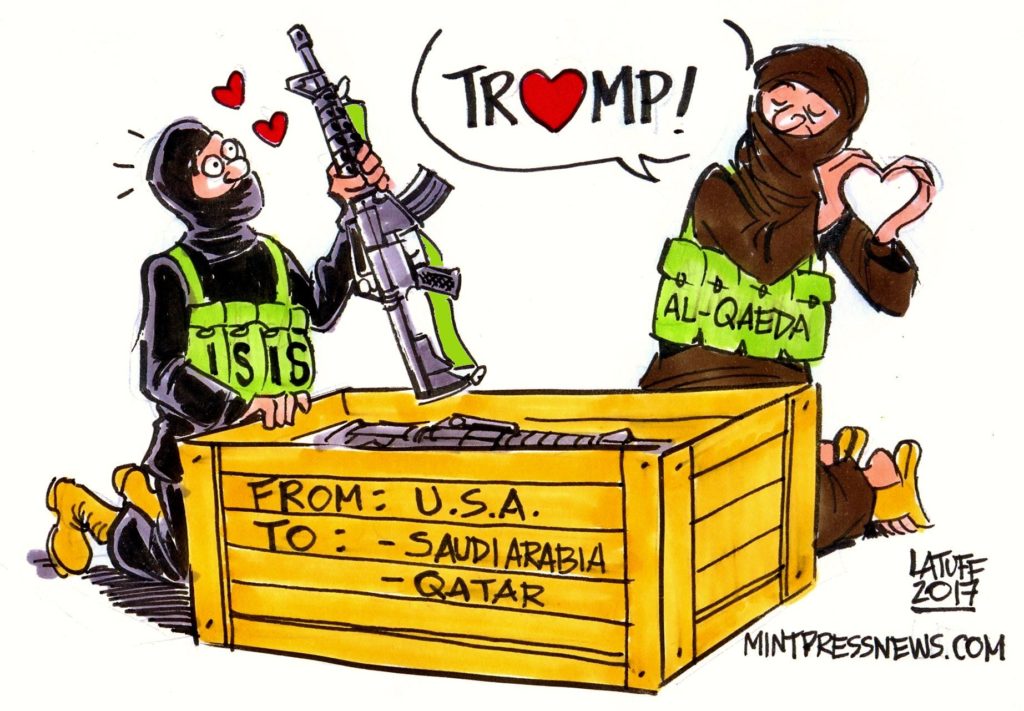 Terrorist fundraising and war crimes – the many sins of Al-Muhaysini

Abdullah al-Muhaysini is a member of the sharia council for Hayat Tahrir al-Sham, an alliance of jihadist factions that includes the al-Nusra Front, a former al-Qaeda group remembered by its former name Jabhat Al Nusra that Saudi Arabia and its allies have accused Qatar of funding.

On June 9, 2017, Saudi Arabia published a list of terrorists, with al-Muhaysini himself making the list. In late 2013, Muhaysini posted his support for the then-active Madid Ahl al-Sham campaign on Twitter while identifying one of the fundraiser’s organizers, Sa’d bin Sa’d Muhammad Shariyan Al Ka’bi, as well as the campaign’s location in Qatar.

The U.S. said in a sanctions listing in November 2016 that al-Muhaysini was part of the inner leadership circle of the al-Nusra Front, which they consider to be a terrorist group.   He is an avid social media user – his videos show him hugging suicide bombers before they leave for the frontlines, as well as training children to use weapons.

The “Cubs of al Aqsa Camp” for Syrian child soldiers was founded by al-Muhaysini.  On social media feeds, he uses the iconic raised forefinger, which is the universal jihadist salute.  “Your brother is in a good state,” Muhaysini wrote on Telegram, the cloud-based messaging service, after a bombing took place in Idlib.

The U.S. Treasury blacklisted al-Muhaysini in 2016 for acting on behalf of and supporting the al-Nusra Front, saying he had raised millions of dollars for the group – not only from governments, but from private donors in Riyadh, Kuwait City, Doha and elsewhere.   Al-Muhaysini posted two statements of support for Qatar on Telegram.

Abdullah al-Muhaysini has also participated in war crimes. He praised and participated in the execution of 65 captured Syrian Arab Army soldiers at the Abu al-Dhuhur Airbase.  The speech he delivered while standing with the blindfolded soldiers was filled with sectarian hatred.

He has made it clear that his war against the Syrian government is not about change or reform, but about making Syria an extremist Sunni utopia. But isn’t that what ISIS (Daesh)is fighting for as well? This paints all the “rebels” with the same brush: they are all fighting for “Sunnistan,” not for Syria. But what about the thousands of Sunnis who were massacred and maimed in the “revolution” by these so-called Sunni rebels? They are considered collateral damage by al-Muhaysini.

The Muslim Brotherhood and Daesh – two sides of the same coin

Even though the U.S. Congress did debate whether to ban the group in the U.S., they decided to allow it to continue. But Qatar is now under embargo from land, sea and air for its ties to the Muslim Brotherhood. The Trump administration has exerted a policy of “Do as I say, not as I do.”

The Syrian National Coalition, or SNC, was formed in Istanbul, Turkey in 2011 and became recognized as the sole and legitimate representative of the Syrian people. The founding members were all members of the Muslim Brotherhood – this is why many Syrian opposition figures could not join or support that group, because of the radical Islamic ideology it follows. 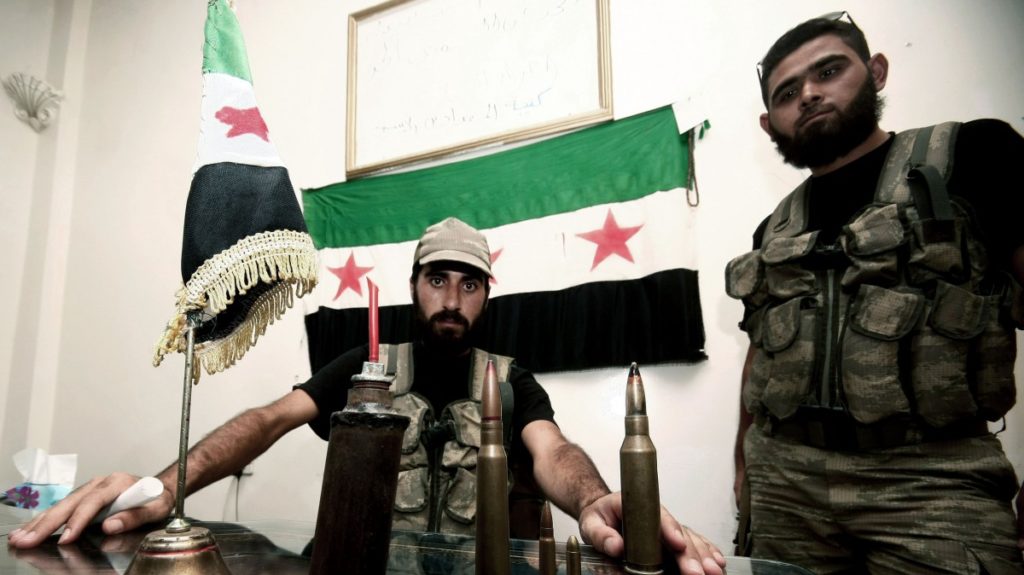 In this Tuesday, July 24, 2012 photo, Free Syrian Army soldiers are seen at the border town of Azaz, some 20 miles (32 kilometers) north of Aleppo, Syria.
(AP Photo/Turkpix)

People who wanted real change and reform in Syria were stuck with either following jihadists or forming their own internal or external opposition groups. The platform and goals of the Muslim Brotherhood are the same platform and goals of Daesh. But while most of the world recognizes Daesh as evil monsters, many modern Western nations consider the Muslim Brotherhood – a mirror image of Daesh – to be a legitimate global political party.

The international community fell over itself while supporting the SNC under the banner of “Friends of Syria.” The Americans, British, French, Germans, Belgians and Australians were all too happy to lend their official support to the goals of the Muslim Brotherhood in Syria, only to later be targeted by jihadist attacks on their own soil, directly tied to the jihad in Syria.

Although Saudi Arabia, the Arab Gulf monarchies (UAE) and Egypt are presently close U.S. allies, they differ from the U.S. in their disapproval of the Muslim Brotherhood. They have drawn a line in the sand – and Qatar is on the other side. It is not unlike a playground fight, with the bullies (Saudi Arabia, the UAE, Egypt) accusing and threatening someone smaller (Qatar). The U.S. has come out on the side of the bullies, even while allowing their enemy, the Muslim Brotherhood, to freely operate in America.  No wonder the average American is confused about U.S. foreign policy in the Middle East.

Syria is the staging ground for a clash of civilizations. This is not East versus West, however. Most of the carnage in Syria is carried out by Arabs killing fellow Arabs, while being supported politically by the West. This scenario is East killing East, while the West sits watching and applauding. The Syrian clash of civilizations pits a modern nation that has been raised on secular values against backward Arab Gulf monarchies that still engage in modern-day slavery and have never had an elected leader or any democratically elected governments.

The Syrian population has been resisting the Israeli occupation of Palestine for over 60 years, and their capacity to resist their own occupation knows no bounds. Syria’s core values are secularism and resistance. The millions of Syrians who have lived through almost 7 years of war are stubbornly hanging onto these values in the face of a global onslaught.

Steven Sahouni is an independent Syrian political analyst and writer based out of Lebanon; he has been covering the Syrian crisis since it’s onset in 2011 and has published several articles in numerous media outlets. He is regularly interviewed by US, Canadian and German media.