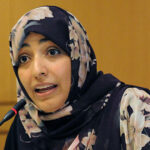 29 Oct 2020 – The beheading of a teacher in France elicited inflammatory remarks from President Emmanuel Macron, which in turn has been met with an Arab boycott of French goods. “Macron’s attack on Islam reveals intolerance and hatred which is shameful for the head of a state like France,” said Tawakkol Karman.

Salafi jihadist scholar Abdullah al-Muhaysini is one of many agents working on behalf of Qatar to combat Saudi Arabia’s Wahhabist ideology. Their battleground is Syria, where a so-called “civil war” is covering up a silent fight between competing political movements.