29 Oct 2020 – The beheading of a teacher in France elicited inflammatory remarks from President Emmanuel Macron, which in turn has been met with an Arab boycott of French goods and outrage by the Muslim world.

Macron is accusing Muslims of separatism and is introducing a new bill to crack down on this sin against French values.

Hashtags in English and French, such as #boycottfrenchproducts, as well as in Arabic are trending on Twitter and other social media following a call to boycott French products across the Muslim world, in response to an “anti-Islam” attitude displayed following the murder of a French teacher.

In Qatar, major supermarket chains started removing French products from their shelves, while the Al Meera company said in a press release October 23, “We affirm, as a national company, that we operate with a vision that is consistent with our religion, established customs and traditions, and in a way that serves our country and our faith and meets the aspirations of our customers.”

Kuwait, Oman, and Morocco are also participating in the boycott of French products.  The oil-rich Arab Gulf countries are an important market for French agriculture, food, beauty, and luxury items.

Qatar University decided to postpone the French Cultural Week in protest of the anti-Islam insults, as their way of participation in the boycott. “Any denigration or violation of the Islamic beliefs, sanctities, and symbols are absolutely rejected,” the university said in a statement. “These insults harm the universal human values and the high ethical principles of all societies,” it added on Twitter.

Mohammad al-Motairi, the head of the Federation of Kuwaiti Travel Agencies, announced 430 travelagencies in Kuwait have also suspended bookings for flights to France.

Image on the right is from Wikimedia Commons 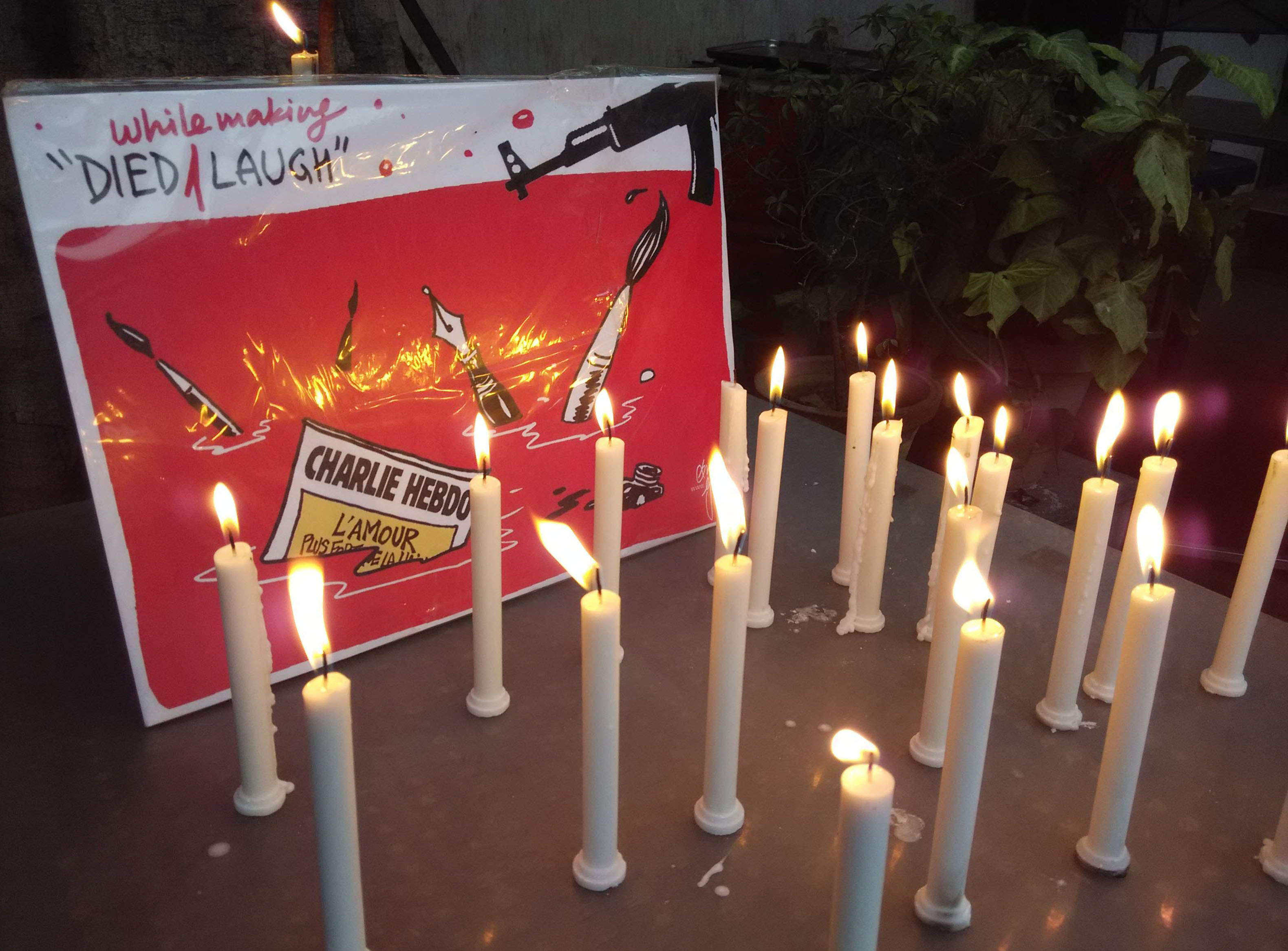 In 2006, a Danish newspaper published demeaning caricatures of the Islamic prophet Muhammed. This caused a violent reaction across the Muslim world. There is a tradition that holds any image of the prophet as unacceptable, and demeaning to Islam, which is one of the three Abrahamic religions, along with Judaism and Christianity.

Charlie Hebdo, a left-wing French magazine, re-published the anti-Islamic caricatures, which have drawn widespread anger and outrage, and in January 2015, 12 people were killed in and around the Charlie Hebdo offices in Paris, by terrorists Saïd and Chérif Kouachi.  The next day, gunman Amédy Coulibaly killed a policewoman and killed four persons at the Hyper Cacher supermarket. The Kouachi brothers and Coulibaly were killed in separate shootouts with police, and the trial of 14 people suspected of being linked to the January 2015 terror attacks is currently being held in a Paris court and is due to continue until November.

Paris has been on high alert since two journalists from a film production company were stabbed outside the former offices of Charlie Hebdo about three weeks ago.

Samuel Paty was beheaded on October 16 in Conflans-Sainte-Honorine in the Yvelines, a suburb north-west of central Paris. The 47-year-old history-geography professor was killed by an 18-year-old Chechen who had contact with a jihadist in Syria.

France participated in the US-NATO regime change project in Syria and was well aware of the French terrorists in Syria, who were following Radical Islam. Hundreds of French citizens traveled by way of Turkey and entered Syria illegally to rape, maim and murder unarmed Syrian citizens, the majority of which were Muslims.

During a course in “moral and civil education” professor Paty showed pupils, aged 12 to 14, the caricatures that had appeared in Charlie Hebdo in 2012. The lesson was to demonstrate the right of “freedom of speech”; however, the caricature was of a male adult, naked, kneeling, and with his genitals fully exposed.  His lesson to the youngsters was met with complaints from several parents, and a formal legal complaint was lodged against Samuel Paty for “dissemination of pornographic images” to children.

The police chased the killer, but he was shot dead after refusing to surrender and threatening the police. The killer had been unknown to the French intelligence community. Four people, including a minor, are reported to have been arrested since the murder.

French President Emmanuel Macron visited the murder site and said the victim had been “assassinated” and that his killer sought to “attack the republic and its values”. “This is our battle and it is existential. They [terrorists] will not succeed … They will not divide us.”

Macron’s comments were widely condemned over their timing and divisive message. “One of our compatriots was assassinated today because he taught. He taught his students about freedom of expression, freedom to believe, or not believe. It was a cowardly attack. He was the victim of a terrorist Islamist attack,” Macron said.

On October 21, Macron announced in a press statement that France will not ban the caricatures insulting the Prophet Muhammad and Islam.

“Islam is a religion that is in crisis all over the world today, we are not just seeing this in our country,” the French president said in a speech introducing a new bill to strengthen France’s state ideology of militant secularism, known as Laicite.

In Morocco, Rabat municipality Consultant Hisham El-Harch said, “The cartoons published by the French magazine Charlie Hebdo targeting the Messenger of Allah are displayed on the walls of some hotels in Toulouse and Montpellier in France after the French president announced that he would not ban these abusive publications.” French activists volunteered to hang the offensive caricatures on walls in public spaces, such as hotels, in tribute to the slain French teacher.

France is struggling to contain the spread of the coronavirus pandemic, while in recent days, raids are targeting Islamic civil society organizations in France.

Macron said the government would present a bill on December 9 to the Council of Ministers, which seeks to strengthen a 1905 law that officially separated church and state in France, and cracks down on separatism, in a pointed reference to Macron’s accusations against Muslims.

He also announced stricter oversight of schooling and better control over foreign funding of mosques.

Critics of the bill, particularly those among France’s six million Muslim community, fear the deepening anti-Muslim sentiment in France will be further inflamed.

The French Interior Minister, Gerald Darmanin, announced arrests, closures of places of worship, and bans of associations including the Collective against Islamophobia in France (CCIF) and the humanitarian association Baraka City.

Macron is facing a tough bid for re-election in 2022, against stiff opposition from the far-right National Rally party, who have complained that the bill does not go far enough. Political experts have asked if the new bill is politically motivated, and tries to portray Macron in a tough anti-Islam light, to win voters closer to his opposition.

Image below is from Wikimedia Commons

“Macron’s attack on Islam reveals intolerance and hatred which is shameful for the head of a state like France.” She added that it is not up to Macron to reform Islam, and “Muslims alone are concerned with that, and they will do that.”

Karman urged Macron to speak about Islam with respect and acceptance, instead of accusations against his citizens who follow the faith. “Macron has delivered his irresponsible inflammatory speech against Muslims and their religion to satisfy a group of fanatics so that they will vote for him,” she added.

“What can we say of a head of state who behaves like this to millions of members of a different faith in his country,” said Turkish president, Recep Tayyip Erdoğan. He added, “First of all, [Macron needs] mental checks.”

Hours after Erdogan’s remarks, France recalled its ambassador to Turkey after the Elysee denounced the “unacceptable” remarks.

Erdogan warned of Europe’s self-destructive Islamophobia, adding that European fascism had entered a new phase with attacks on the rights of Muslims, referring to a recent police raid on a mosque in Berlin.

“Europe is preparing its own end with its front against Muslims,” Erdogan said while addressing a meeting of his governing Justice and Development Party (AK Party) in Kayseri.

Steven Sahiounie is an award-winning journalist and political commentator.