The Surprising Economic Benefits of Peace

While a small handful of individuals and companies may benefit from conflict, the majority suffer – not only in human terms, but also economically.

Since 2010, the Institute for Economics and Peace (IEP) has developed leading research which calculates the economic losses from violence and conflict, breaking the myth sustained by many that war is good for the economy. While a small handful of individuals and companies may benefit from conflict, the majority suffer – not only in human terms, but also economically. Each year, IEP publishes an update of its economic impact of violence and conflict model. This year it showed a similar finding to previous years – each year, the world squanders an unimaginable amount of resources on violence.

In 2016 the global economy lost $14.3 trillion to violence and conflict in purchasing power parity (PPP) terms. This is equivalent to 12.6% of the world Gross Domestic Product (GDP), or simply 12.6% of everything the world produces and consumes. This is an enormous amount of economic activity that is lost on creating, containing and dealing with the consequence of violence. While one group of countries suffer from civil war, ethnic violence and terrorism, others are devastated by organised crime and high homicide rate. The human, social and economic cost it exacts is enormous in either cases. 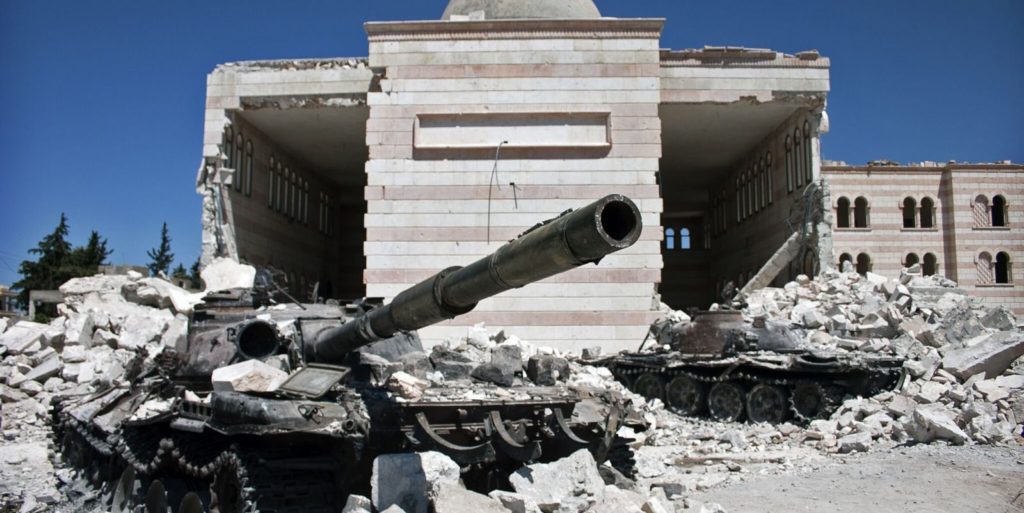 Therefore, the greatest immediate savings can be made in the consequential losses from violence. Here is where violence and conflict is like few other phenomena in terms of its sheer impact on economic activity – only financial crises or natural disasters can potentially equal its negative impact. However, unlike financial crises, which may profoundly disrupt the flow of economic activity in a modern capitalist economy, conflict and violence destroys society’s stock of physical capital. Added to this, warfare has both an immediate and longer-term impact on human capital through lost skills, displacement, and trauma which may take years to recover from, if ever at all.

Images of any major Syrian city in 2017 show the typical extent of damage in modern warfare; not only are private houses and businesses destroyed, but critical infrastructure including electricity, water supply, telecommunications, schools and health facilities have been turned to rubble. While IEP’s model estimates the cost of the war to the Syrian economy is currently 67% of its GDP, the long-term costs will likely be much higher given it will take decades for the country to be rebuilt in the eventual conclusion of the conflict.

The surprising finding from this year’s GPI report is that despite the ongoing humanitarian crises in the Middle East, more countries actually increased in peace in 2016 than deteriorated.

The counterfactuals of spending this money elsewhere are tantalising – a mere 10% of this amount would be enough to address many of the most fundamental challenges of our time. After all, 10% of the total losses from conflict represents $1.43 trillion, equivalent to the flow of Australia’s entire GDP, the 12th largest economy in the world. Imagine transferring that 10% to increase global Official Development Assistance (ODA), thus multiplying by almost 10 times the money directed from rich to poor countries to address global poverty and the UN’s Sustainable Development Goals (SDGs)? Or, perhaps tripling the flow of resources into global climate finance to address climate change?

This year, the world made a step in the right direction. The surprising finding from this year’s GPI report is that despite the ongoing humanitarian crises in the Middle East, more countries increased in peace in 2016 than deteriorated – some 93 countries benefitted from improvements in peace compared to 68 that deteriorated, reflecting a slightly more peaceful world on average. This is meaningful, as more than 4 billion people live in the 93 countries that improved in peace, many of which saw reductions in the levels of political violence as well as in the homicide rate over the last ten years.

Because of the slight improvement in peace, the economic impact of losses from violence declined by 3%. While this mere 3% improvement places us nowhere near the 2008 levels of peacefulness, it is nonetheless equivalent to $431 billion of savings to the global economy.

The increase in the economic impact of violence reflects a less peaceful world: 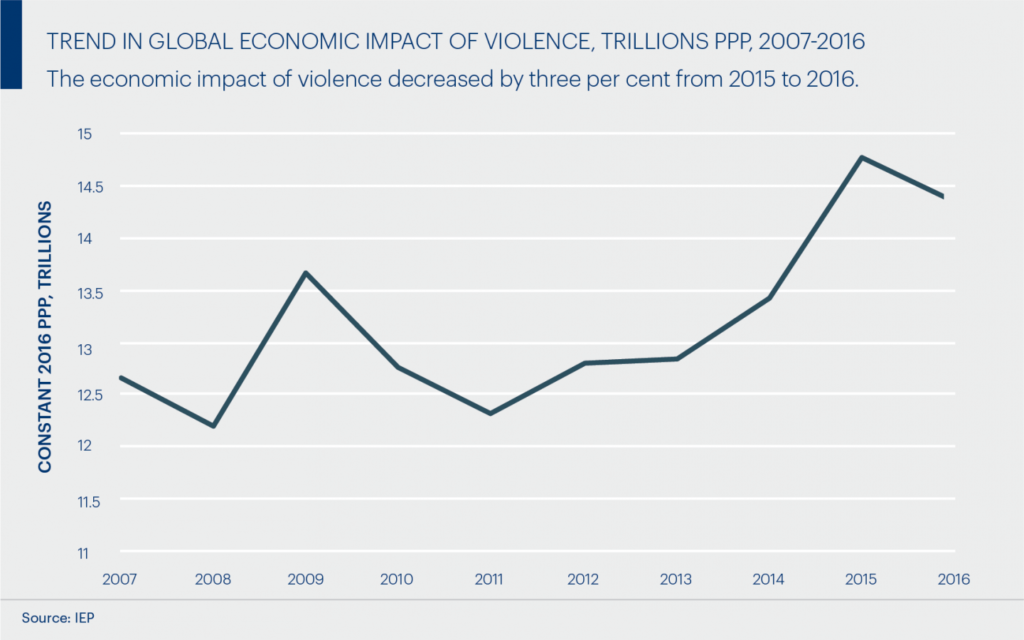 The two major contributors to the global economic impact of violence are containment related. Military and internal security expenditure, which while necessary for peace, can also create violence. Some countries have too much (North Korea, Saudi Arabia for example) and others too little (many sub-Saharan countries where impunity and lack of rule of law is rife).

Better understanding this nexus between consequential and containment costs is key to lowering the economic burden of violence, especially in countries that are not engaged in war. In some contexts, over-spending on containment reflects mis-aligned priorities or the pursuit of policies that don’t succeed in increasing peace (mass incarceration for example), while in others, it is under spending and corruption which undermines the rule of law.

We now know from ten years of IEP’s peace and conflict research and the Global Peace Index report that the key to realising the 10% post-cold war peace dividend is easier said than done. However, a critical starting point lies in the facilitation of better research, and wider awareness of the negative economic impacts of violence and its opposite factor – the tantalising economic benefits of peace.

Vision of Humanity is brought to you by the Institute for Economics and Peace, by staff in our global offices in Sydney, New York, The Hague and Mexico. Alongside maps and global indexes, we present fresh perspectives on current affairs reflecting our editorial philosophy.