Why Is Neoliberalism Back in Latin America?

Neoliberalism destroyed Latin America in the 1990s. Today it is being reintroduced – and it will wreak havoc again. 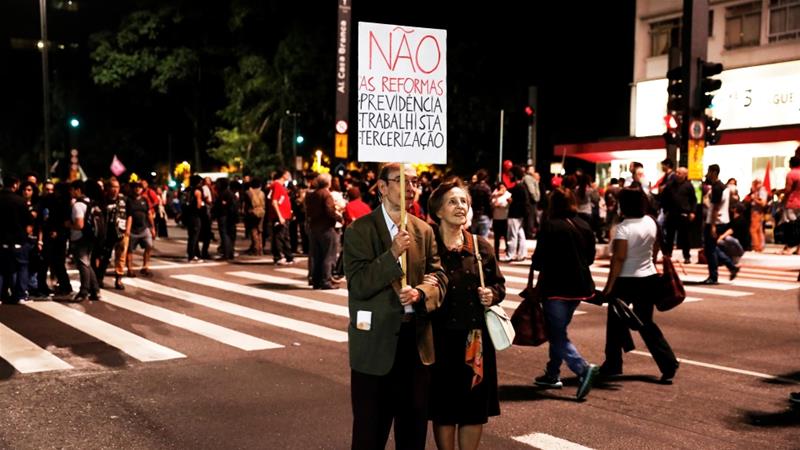 Pensioners hold a banner that reads ‘No to social security, labour and outsourcing reforms’ during a protest against President Michel Temer’s proposed economic reforms in Brazil. [Nacho Doce/Reuters]

15 Jul 2017 – Even though it is a taboo word to many, neoliberalism is not good or bad in itself. Rather, it is a means to an end. The state is purposefully reduced in its scope of action to a minimum – by way of policies associated with fiscal austerity, financial deregulation, free trade and the privatisation of public assets, among others – so nothing can prevent the market and its profit-oriented agents from reaching a fair point of equilibrium between demand and supply. According to those who advocate such perspective, the state is nothing but a “necessary evil”.

In Latin America neoliberalism has been tried and has not worked. In fact, it has produced disastrous results. But instead of learning from past mistakes and seeking a different political direction, political elites in Latin America have started pursuing again those same neoliberal policies that failed so miserably in the past.

The largest and most influential countries in the region – Brazil, Mexico, Argentina – have embraced it again with passion.

We still remember the way neoliberalism has harmed Latin American peoples. In the late 1980s and early 1990s, Brazil (under Fernando Collor de Mello), Argentina (under Carlos Menem), Mexico (under Carlos Salinas), Venezuela (under Carlos Perez), and Peru (under Alberto Fujimori) were all being governed by right-wing presidents who adopted the so-called “Washington Consensus” – a neoliberal formula coined by the World Bank and seen by enthusiasts as a ticket to glory – as if it were the wave of the future. Back then, this reasoning was making some sense, since the US (under Ronald Reagan) and Europe (especially the UK under Margaret Thatcher) had tried it and reaped some positive results for a while.

However, the results of “Washington Consensus” policies in Latin America were tragic: GDP stalled, social policies shrank, income concentration and poverty rose, unemployment and labour precariousness surged, violence skyrocketed. In some of these countries, not even inflation was tamed.

As a consequence, Collor was impeached in Brazil, whereas Menem lost his grip in Argentina. Fujimori fled his country to Japan and Perez was removed from office after bloodshed in the streets of Caracas (the Caracazo). Salinas faced a turbulent end of mandate and exiled himself to the US. There is little room for controversy: The neoliberal experience of the 1990s was simply disastrous for Latin Americans.

Curiously enough, some 25 years later neoliberalism has made a comeback to the region. Brazil, Argentina, Mexico, Colombia, Paraguay and Peru have proud neoliberals serving as presidents these days.

And this is just when the whole world – Donald Trump in the US, Theresa May in the UK, Narendra Modi in India, Vladimir Putin in Russia and Recep Tayyip Erdogan in Turkey to name but a few – is clearly going protectionist.

In the aftermath of the 2008 financial crisis, Latin America could not keep pace with other rising states and started to consider an anachronistic repertoire of solutions. In the end, under the risk of “playing the sucker”, developing countries from the Western hemisphere decided to open their economies to the outside world, without enjoying any reciprocity in terms of tariffs and trade preferences.

In the 2000s, after the fiasco of ‘Washington Consensus’, Brazil began to supply Latin America – and why not say the rest of the developing world – a model of public administration that was worth emulating, for it combined conservatism in economic policies with a robust social agenda.

Why so? Despite all bad memories that neoliberalism evokes in Latin America, political leaders appear to be self-assured: That is the only way to economic salvation. There is no alternative!

The fullest chapter of this suspense story is being written in Brazil as of now: To escape removal from office and an eventual imprisonment, Michel Temer is investing all of his energy in the objective of passing a programme of neoliberal reforms on the country’s labour legislation, the pension system, and the procedures for macroeconomic governance. While the first two items of Temer’s agenda still depend on the Brazilian Congress to get incorporated into the law, the latter is already under way: Brazil has bid unilaterally for full membership of the Organisation for Economic Co-operation and Development (OECD) as an attempt to give market agents a hint at how desperately receptive to investments the country is. It is now up to OECD members to allow Brazil’s accession to the “rich men’s club”.

One must still recall that, always on grounds of fiscal austerity and market-friendliness, Temer has kicked off his presidency by freezing governmental expenditure on education and health for the next 20 years in Brazil.

Surprisingly, yet, this neoliberal comeback in Latin America is taking place on the back of a promising and relatively prosperous decade.

In the 2000s, after the fiasco of  “Washington Consensus”, Brazil became a model for public administration that was worth emulating, for it combined conservatism in economic policies (that is, a mix of austerity, inflation targeting, and operational independence at the level of the Central Bank) with a robust social agenda. Many Global Southerners have followed through this path. In a provocative way, some journalists and academics have even dubbed it “the Brasilia Consensus”.

During this period, in the greater part of South America, social policies drawing on the Brazilian public policy experiments have become an electoral winning card. Caribbean countries have implemented conditional cash transfer schemes based on the Brazilian social welfare programme. Additionally, Brazilian Health Ministry’s protocol to fight and treat HIV/Aids has been adopted over the African continent. Not to mention dozens of requests made by several leaders from Arab and Asian countries to the Brazilian Foreign Ministry to form partnerships for agricultural cooperation. Even the adoption of a food security platform inspired by the “Fome Zero” (Zero Hunger) programme is said to be behind Brazilian Jose Graziano da Silva’s appointment to run the Food and Agriculture Organization of the United Nations.

As Brazil got trapped into deep economic recession and multiple political crises during the presidencies of Dilma Rousseff and Michel Temer, it could no longer provide a role model. Now that short-lived success story is apparently forgotten.

It only took two or three years for a 180-degree reversal of policy expectations in the region. But the question that generates heightened perplexity is: Why should one expect neoliberalism to bring about a different – positive – result this time?

It is widely assumed that doing the same thing over and over again while waiting for distinct outcomes for each attempt is insane. This “insanity” could possibly define Latin American politics at the moment. Latin Americans would do well to look back and remember what neoliberalism did to their countries a mere 25 years ago. They should demand a return to the policies that actually brought social protection to the poorest in the last decade. It is time, after all, to resuscitate an autonomous Latin American project for prosperity.

Dawisson Belem Lopes is a professor of international and comparative politics at Universidade Federal de Minas Gerais and a researcher of the National Council for Scientific and Technological Development in Brazil.