150 Years of ‘Das Kapital’: How Relevant Is Marx Today?

The seminal work of the 19th century economist still provides a framework for understanding contemporary capitalism. 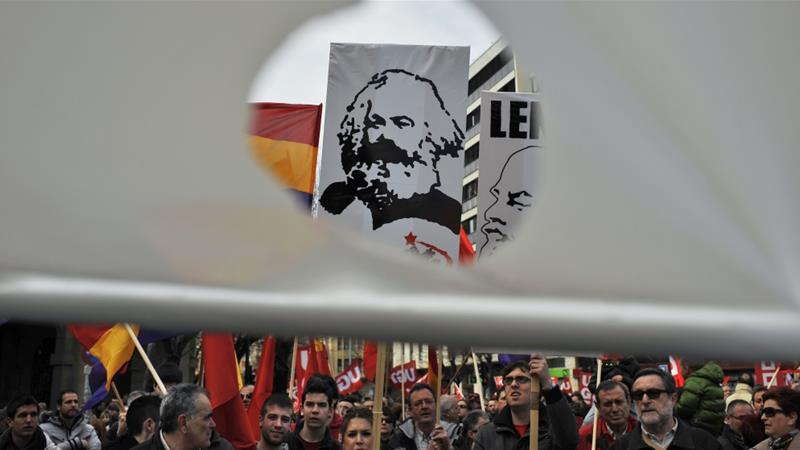 A face of Karl Marx is seen through a hole in a banner as people in Spain march to protest against the conservative government’s tough labour reforms in 2012. [Alvaro Barrientos/AP]

22 Aug 2017 – It is quite amazing that Karl Marx’s Capital has survived and been continuously in print for the past century and a half. After all, this big, unwieldy book (more than 2000 pages of small print in three fat volumes) still has sections that are evidently incomplete. Even in the best translations, the writing is dense and difficult, constantly veering off into tangential points and pedantic debates with now unknown writers. The ideas are complex and cannot be understood quickly. In any case, the book aims to describe economic and social reality in 19th-century northwestern Europe – surely a context very different from our own.

This is a book that has been pronounced dead or obsolete many times, but it keeps bouncing back, with the latest recovery in interest and sales just after the Global Financial Crisis of 2008. So why do so many people all over the world still read (or try to read) Karl Marx’s Capital today? Obviously, it must have something going for it – and, in fact, it does indeed still provide a useful framework for understanding the essential features of capitalism, no matter how different its contemporary manifestations may be.

Consider only a few of these insights. First is the central point about capital: for Marx, it is not just a resource in itself, a simple factor of production analogous to land and labour, but an expression of very specific social relations of production. The social relation between employer and worker is what enables capitalist production to take place at all. It requires workers to be “free” in a double sense: “free” to sell their own labour power (not bound by other socioeconomic ties and constraints) and “free” of any ownership of the means of production, so that they have no choice but to sell their labour power for their own material survival. Even when matters appear to be more complex because of the emergence of subcontracting and the “gig economy”, this underlying social relation is still critical.

The concentration of ownership of the means of production in a few hands is effectively what enables capital to play its role in production. But this concentration was necessarily based on expropriation from those who previously possessed it, such as peasants and small artisans who could have produced on their own. This “primitive accumulation” has often been a violent process, but it can also occur – and still continues to occur – in other more complex ways, because of the uneven development of capitalism in different regions and in different sectors.

OPINION: Why so many communist philosophers?

A central, and still very powerful, concept is that of “commodity fetishism”: the situation in which relations between people become mediated by relations between things: commodities and money. Commodities (goods and services produced for exchange) are not simply things or objects, because they possess both use value (meeting human needs or wants) and exchange value (as a thing that can be traded in return for something else). But value then gets seen as intrinsic to commodities rather than being the result of labour, and the exchange of commodities and market-based interaction are seen as the “natural” way of dealing with all objects, rather than as a historically specific set of social relations.

Commodity fetishism is the illusion emerging from the centrality of private property in capitalism, which then determines not only how people work and interact, but also how they perceive reality and understand social change.

More broadly, commodity fetishism is the illusion emerging from the centrality of private property in capitalism, which then determines not only how people work and interact, but also how they perceive reality and understand social change. The urge to acquisition, the obsession with material gratification of wants and the ordering of human well-being in terms of their ability to command different commodities, could all be described as forms of commodity fetishism. The obsession with GDP growth per se among policymakers and the general public is an extreme, but widespread, example of commodity fetishism today.

The third feature is what we now call globalisation, and it is the natural result of the tendency of the system to spread and aggrandise itself – to destroy and incorporate earlier forms of production, and to transfigure and transform technology and institutions constantly.

Capitalism is dynamic, constantly generating new types of production organisation and economic institutions: not just the factory system but more recent arrangements, financial institutions and structures, legal systems. The accumulation of capital generates higher productivity and transforms systems, but it is also associated with uneven development. Marx saw capitalism as being in a situation of continuous disequilibrium, because of this tendency of uneven development, which is not confined to a single arena, but characterises all social and economic relations.

OPINION: Education or capital in the 21st century?

Thus, there is an inherent tension between the expansion of the productive forces and the ability of the economic system to generate sufficient demand for the goods that are produced. There is disproportionality between the expansion of fixed and variable capital, which makes it more difficult to generate profits. There is disproportionality between sectors that emerges in the process of accumulation. There is geographically uneven development that simultaneously creates both “developed” and “underdeveloped” areas. This can be extended to explain imperialism, which can be understood as the struggle for control over economic territories of different kinds. And the imbalance between money as a medium of exchange and money as a measure of value gets amplified by the development of credit and finance, creating a higher tendency for crisis.

The system generates many conflicts and contradictions, only some of which culminate in periodic crises. Since the basic dynamics of capital is simultaneously to aggrandise itself and impoverish other classes such as workers and peasants, within and across nations, it obviously generates class conflicts. But the system also generates intra-class conflict, pitting individual capital against other capitals and the individual worker against other workers. There is a Darwinian struggle for survival constantly at work, so individualism, conflict and competition become the driving forces of the system.

But these also create what Marx called the anarchy of the market and the inevitable tendency towards crises. Overproduction in terms of the market (even when human needs of all the people in the society need not be satisfied) is a characteristic feature simply because of the way individual capitals operate in the drive to generate more profit. As a result, the process of accumulation is never smooth. Rather, it is uneven and punctuated by crises. Partly, this is the result of the very success of capitalism in delivering more economic growth and technological advance.

These periodic crises are a way of resolving the contradictions inherent in the dynamics of capitalism, albeit in a sharp and possibly violent way. Because the underlying imbalance is typically one of overproduction (relative to demand, not need) such crises usually involve the destruction of a significant proportion of existing products and productive forces. For Marx, crises under capitalism are never purely “financial” or “monetary” – rather they reflect the real imbalances, disproportionalities and uneven development that are fundamental features of capitalist accumulation, even when they are expressed in financial terms. Marx did not talk about the rise to dominance of finance, but it can be anticipated from this progression, and financialisation also can be seen as an extension of capitalist processes into more and more areas of life.

A fundamental feature of the capitalist system that Marx described, and one that has complex social and philosophical underpinnings, is alienation. This does not refer to an isolated experience of an individual person’s feeling of estrangement from society or community, but to a generalised state of the broad mass of wage workers. Most simply put, it can be expressed as the loss of control by workers over their own work. This alienation of the workers means that they effectively cease to be autonomous human beings, because they cannot control their workplace, the products they produce, or even the way they relate to each other. Because this fundamentally defines their conditions of existence, this means that workers can never become autonomous and self-realised human and social beings under capitalism.

This alienation, combined with commodity fetishism, creates a peculiar kind of unfreedom – which is often not even widely noticed, because individual emancipation appears to result from “universal saleability”. So every living creature is effectively transformed into property and all social relations become transactionary.

Of course, there is much about capitalism that is not captured in this book: the role of unpaid labour, especially in social reproduction and care work within households; the relationship of the economic system with the natural environment, and so on. Even so, the strong contemporary resonance of many of these concepts means that it is not surprising that people still look to this somewhat forbidding book for insights and understanding.

Jayati Ghosh is Professor of Economics at the Centre for Economic Studies and Planning, School of Social Sciences, Jawaharlal Nehru University, New Delhi. She was born in 1955 and educated at Delhi University, Jawaharlal Nehru University and the University of Cambridge, England where she obtained her PhD in 1983. She has a wide range of research interests, including globalisation, international trade and finance, employment patterns in developing countries, macroeconomic policy, issues related to gender and development, and the implications of recent growth in China and India. She has authored and/or edited a dozen books and more than 160 scholarly papers.