Congressman Thomas Massie blows the lid off the US subsidized opium trade and taxpayer funds flowing into the hands of the Taliban in Afghanistan.

25 Aug 2017 – This week, President Donald Trump, just like his predecessor Obama, promised to continue the utterly corrupt failure of a brutal occupation that is Afghanistan—despite running on a campaign to end it. For decades, the United States has been subsidizing—to the tune of billions of US tax dollars—failed projects, infrastructure, military, police, and yes, even terrorism. Yet Afghanistan is worse off today than they were before the government lied to Americans, claiming they were responsible for 9/11 instead of Saudi Arabia.

In a recent speech on the state of the Afghanistan quagmire, Congressman Thomas Massie (R) KY, exposed some hard truths that very few people in Washington are courageous enough to address. While most politicians cheered Trump’s insane decision to increase US presence in Afghanistan this week, Massie Blew the lid off of it.

For years, Massie has pointed out that the US has blown billions of dollars on failed projects alone. As of last year, the number of failed projects totaled over 100 billion.

To put this number in perspective, the entire amount of money the United States allocates to spend on rebuilding America’s crumbling highways every year is less than half of what it’s blown on failed projects alone in Afghanistan.

Massie noted that hundreds of millions of dollars were spent on a hydroelectric damn that the US thought the Taliban would destroy. However, they did not destroy it. Want to know why, Massie asked, “The get the electricity! We’re paying the light bill for the Taliban now. They get 30 percent of the electricity in exchange for not blowing it up, or shooting the operators who are running the damn.”

US taxpayer dollars go to a hydroelectric dam in Afghanistan that provides 30% of its power to the Taliban. What's the goal in Afghanistan?

But it’s not just the wasted money giving terrorists electricity, the US is also protecting and funding the drug trade.

Of that wasted $100 billion, $8 billion was spent failing to eradicate the Afghan opium trade. Not only did the this massive amount of money not stop the opium trade and production but it doubled it!

USA spent $8billion to eradicate poppy in Afghanistan and they doubled annual production of poppy (opium). What's wrong with this picture?

Western profiteers are making a figurative killing off of heroin for the literal killing of people in Afghanistan.

A former British Territorial Army mechanic, Anthony C Heaford released a report three years ago, and a series of photos, which he says proves that British and American troops are harvesting opium in Afghanistan. 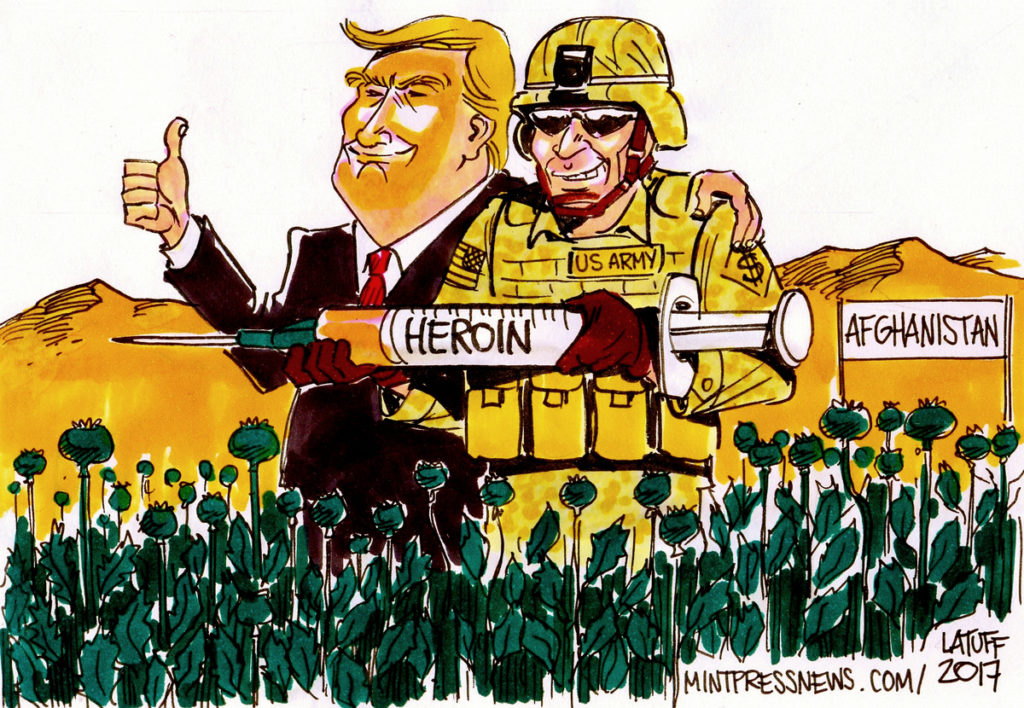 In the video below, Massie explains how he asked the inspector general why they don’t just spray herbicide on all the poppy fields to eradicate the plants. Massie was told they cannot eradicate the plants as the Taliban needs the money from opium production.

“By the way,” Massie explained, “The Taliban used to prevent people from growing poppy.”

If you think that Trump doesn’t know that a continued US occupation of Afghanistan will lead to a larger heroin epidemic, more innocent civilians killed, more troops needless dying, and more terrorism, think again. For years, Trump decried the war on Terror, pointing out the horrific nature of occupation.

Ron Paul is right when he says we are wasting lives and money in Iraq and Afghanistan.

Ron Paul is right when he says we are wasting lives and money in Iraq and Afghanistan.

Let’s get out of Afghanistan. Our troops are being killed by the Afghanis we train and we waste billions there. Nonsense! Rebuild the USA.

But things change, according to Trump, and once he got in the White House, he magically saw the serious need to continue the waste and destruction in Afghanistan.

The lunacy of continuing the occupation in Afghanistan, knowing the only ones who benefit from it are warlords, drug cartels, the CIA, terrorists, and the military industrial complex, is staggering.

Innocent people will die, your children’s children will be forever indebted to the Federal Reserve, and the global war machine—which knows no home country—will be empowered and expanded. For what?

“I had hoped the Afghanistan war would end soon, but now it’s inevitable that babies born during the war will be deploying to the war in 2019,” Massie said shortly after Trump’s speech Monday night.

Sadly, Massie is only accompanied by a handful of people in the house and senate in his stance. The overwhelming majority want more war because their lobbyists tell them that’s what will keep them in their seat.

As you listen to the speech below, remember, every single representative, senator, and adviser, all the way up to Trump, knows these facts, yet they choose to perpetuate them.

This is not only shameful—it’s criminal. Troops aren’t protecting your freedom in Afghanistan, they are being used to enrich a corrupt group of sadistic elites. Please share this article with your friends and family to show them the destructive, deadly, and criminal act of continuing a war in Afghanistan.

Congressman Thomas Massie explains how the US government has made deals with the Taliban to give them electricity and turn a blind eye to their opium trade.