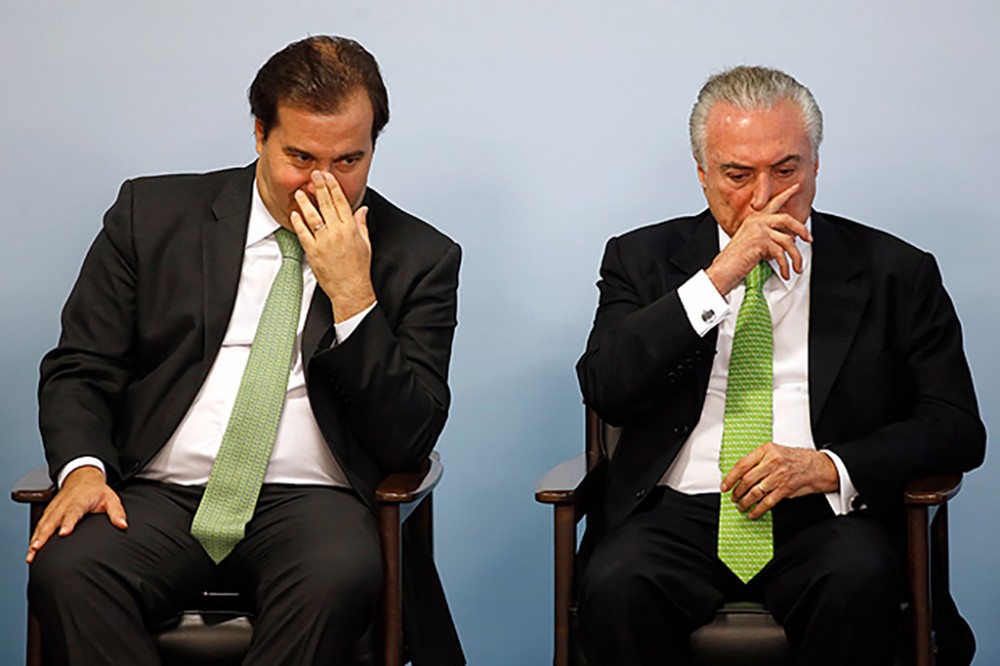 3 Aug 2017 – Just over a year ago, in Brasília, one of the most nauseating and humiliating political spectacles I’ve ever seen took place over nine hours. In Brazil’s lower House – a body where a majority of members are implicated in corruption investigations – one dirty, shady cretin after the next stood up in front of television cameras and flamboyantly declared that their conscience, their religion, their God, their children, their devotion to Jerusalem, the memory of their mother, their pastor, the purity of their soul demanded that they punish corruption by removing the elected President, Dilma Rousseff, from office. 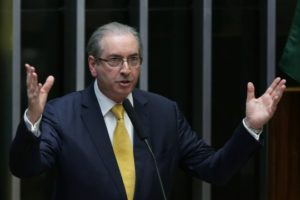 With clarifying symbolism so perfect no screenwriter could imagine it, that tawdry, vulgar sleazefest was presided over by House Speaker Eduardo Cunha (pictured, above), an organized crime boss masquerading as a legislator. Shortly after he engineered Rousseff’s removal – which the nation’s major media elites unified to pretend was motivated by earnest concern about corruption –  Cunha was sent to prison, accused of bribery, money laundering, witness intimidation, and racketeering.

In sum, Brazil’s incomparably corrupt political and media class tore the country apart, effectively and deliberately reversing the outcome of the 2014 election, by insisting that their high ethics and solemn respect for The Rule of Law simply could not tolerate the mundane, common budget tricks Rousseff deployed to make the economy appear stronger than it really was. Words do not exist to describe what a glaring fraud it all was.

But now – fast forward to yesterday – they themselves have made the true nature of their deeds and their character as clear as it could possibly be. The career mediocrity and soulless operative they installed to run the country, Vice President Michel Temer, has been drowning in actual corruption ever since he was installed. Just two months ago, audio tapes surfaced of Temer endorsing bribery payments by a Brazilian businessman to numerous witnesses, including his party comrade Eduardo Cunha, to maintain their silence.

Just think about that: in the country that, just over a year ago, pretended to be so morally offended by Rousseff’s budgetary tricks that they simply had to remove her from office, they have now all listened to the President they installed endorsing the payment of bribes to ensure the silence of witnesses. They played the recordings on television. Everyone heard Temer, in his own voice, just a few months ago, participate in blatant crimes. He was shortly thereafter indicted by the country’s top prosecutor – the first-ever sitting President to be formally charged with common crimes while in office.

A month later, evidence emerged that Temer personally received ample bribes, accompanied by disclosure of a video of one of his closest aides carrying a suitcase full of cash after Temer directed bribe payments. How can you have a country – especially one that spent a year with its elites pretending to be revolted by low-level budgetary maneuvers – run by someone who everyone has seen and heard wallowing in bribery and witness silencing?

In Brasília, everything is possible. Yesterday, the same lower House that last year voted to impeach Rousseff had to decide whether to suspend Temer and put him on trial for corruption. By a vote of 263-227, they refused to do so, ensuring that Temer – bribes and all – remains in power. Yesterday’s vote was presided over by Cunha’s successor, House Speaker Rodrigo Maia of the right-wing Democrats Party (pictured above, with Temer); Maia, needless to say, is seriously implicated by the corruption investigation.

The very same bloated, slimy, pompous right-wing and centrist criminals who 12 months ago shamelessly draped themselves in the flowing costumes of ethics, religion and morality banded together to ensure that their fellow criminal who rules the country will face no consequences. He now cannot face these charges until he leaves office.

With symbolism almost as potent as Cunha presiding over Dilma’s impeachment, their votes were purchased by Temer using public funds. The President spent the last two months hauling them, one after the next, into his palace to shower them with public largesse until they agreed to block any investigation of him. This is who Brazilian media elites, in the name of fighting corruption, knowingly empowered. The joke of it, and of them, is as flagrant as it is tragic.

Notably, as opposed to last year when they basked in the limelight, this time, like roaches, they scampered under the kitchen cabinets to hide. Knowing that literally almost the entire country (other than its oligarchical elites) despises Temer and wants him gone – he literally has a 5% approval rating – the bulk of them did their dirty deed in the most ashamed, furtive way possible. Few were willing to speak in defense of Temer. They crawled up to the microphone when their names were called and cast their bribery-protecting vote with as little fanfare as possible.

Aside from showing the world the pulsating, deep-seated, still-metastasizing sickness that lies at heart of Brazil’s political class – what kind of ruling class decides to leave in place a President caught on tape endorsing bribes? – yesterday’s vote also forever dropped the mask on the real reasons why Rousseff was impeached.

Contrary to the deceitful script created and relentlessly disseminated by the highly-paid, glittery propagandists employed by the country’s incestuous, oligarchical media, her impeachment had two, and only two, motives: 1) protect Brazil’s political class from the corruption investigation by empowering the capital’s most corrupt figures and letting them kill the investigation, and 2) serve the interests of domestic plutocrats and international finance by “reforming” social programs for the nation’s poorest in the name of “austerity.”

The most remarkable aspect of the last two years of political drama is that an audio recording of Temer’s closest Senate ally, Romero Jucá, surfaced in the middle of the impeachment crisis, in which he described with perfect clarity the real reason and the real goal of Dilma’s impeachment. Removing Dilma, Jucá said when he thought he was speaking in secret, would enable a “national pact” – which the Supreme Court, the corporate media, and the military had all endorsed – whereby the corruption investigation would be killed, and the country would blithely move on.

After that embarrassing recording was revealed, Jucá had to resign from Temer’s cabinet, but his exile was extremely short-lived, because everyone – the judges, the generals, the “news anchors” – knew that the plot he described really was the one they had all signed onto when removing Dilma. Very shortly thereafter, Jucá became the leader of Temer’s government in the Senate. And the plot that he so perfectly described – to kill the investigations and protect and empower the criminals – has been followed to the letter, culminating in yesterday’s vote to protect the Supreme Criminal.

A few months ago, the same Congress that feigned indignation over Dilma’s budget maneuvers enacted laws to weaken the corruption investigation, and now there is talk, this morning, of the corrupt officials suing the Prosecutor who indicted them. Just as happens in the U.S. – where the only people who go to jail for war crimes are those who expose them – with rare exception, the only people who will pay a price for Brazil’s systemic corruption are those who exposed it. This was the filthy scheme all along in removing Dilma, and nobody even bothers to deny it any longer. How can they?

But the big prize from all of this is – as usual – the rewards to the oligarchs and punishment of the nation’s poor. In a remarkable admission that Brazil’s corporate media literally ignored, Temer went to New York in September and, speaking to a group of hedge fund tycoons and foreign policy elites, explicitly admitted that the real reason Dilma was impeached was her resistance to greater austerity. Every time it looks as if Temer is in danger, the Brazilian currency and stock market are punished; when it looks as if he will survive, they rally. That’s because he’s the instrument for austerity. Temer’s Finance Minister wasted no time after the vote in announcing that the austerity “reforms” they are desperate to impose will again be introduced now that he has been saved.

Temer is the creation of Brazil’s oligarchical class and its enslaved media. So devoted have they been to his empowerment – and to the right-wing coalition that has lost multiple elections but nonetheless now magically run the country through Temer – that one of their brightest media stars, Eliane Cantanhêde, last year expressly equated opposition to Temer with treason, announcing that “the effort to overthrow Temer, right now, is to work against Brazil.”

In one sense, there is pure karmic justice here: Brazil has the political class, and the broken and corrupt leaders, that perfectly reflect the character of the elite oligarchical class that has ruled the nation with an iron fist for decades.

But in a much more profound sense, what they have done is a horrific tragedy that is gut-wrenching to watch: hundreds of millions of human beings, born in a deeply stratified society, who have been without hope for generations, finally got a glimpse of hope during the last decade, only to watch it be stomped and extinguished by the same ruling class of thieves and liars that has been the sole authors of the country’s enduring plight of inequality and misery for the many.

We depend on the support of readers like you to help keep our nonprofit newsroom strong and independent. Join Us