1 Aug 2017 – Describing the situation in Yemen as “very bleak,” with “no end in sight,” a senior United Nations official envoy today said the war-torn country, already reeling from malnutrition and dwindling health care, is plummeting into further distress amid a deadly cholera outbreak and looming famine.

“Historically, Yemen has been one of the poorest Arab nations – if not the poorest– with [poverty] and corruption, poor governance and poor infrastructure. The war has simply made it much worse,” said Auke Lootsma, UN Development Programme (UNDP) Country Director, briefing journalists in New York via teleconference from the capital, Sana’a.

He compared the situation in the country to a bus “racing towards the edge of a cliff.” Instead of hitting the brakes and turning around, Mr. Lootsma said, “the one controlling the direction of the bus keeps going and pushes the accelerator, all but certain to crash.” 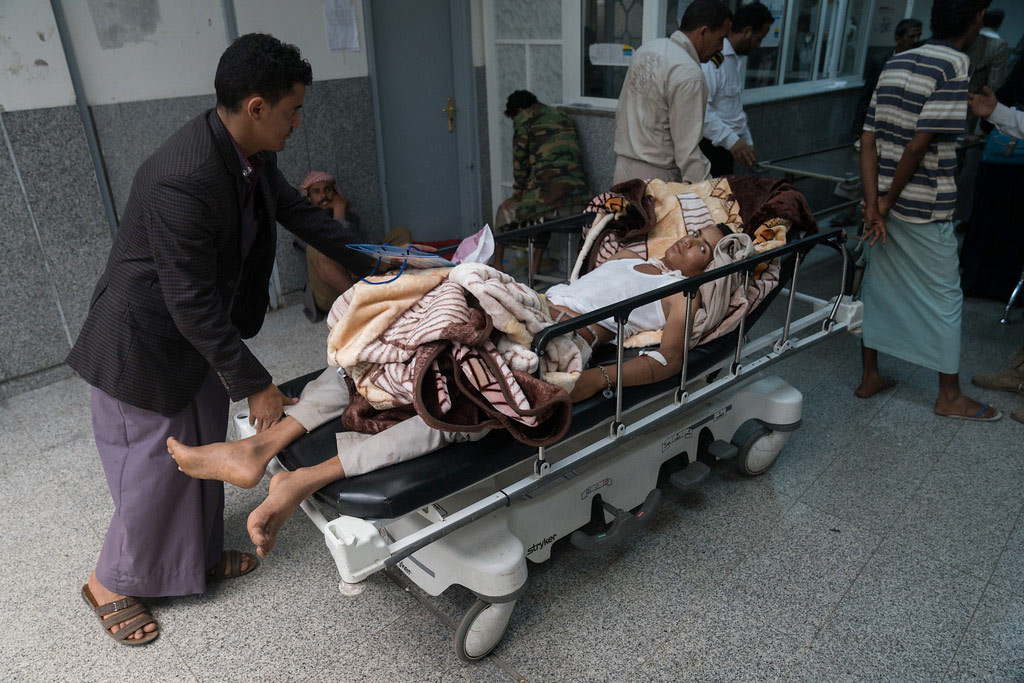 He stressed that the Yemeni people are enduring incredible hardship, with 70 per cent of the population – some 20 million people – in need of humanitarian assistance. Additionally, some 400,000 cases of cholera recorded in the past few months have resulted in 1,900 deaths.

Mr. Lootsma emphasized that due to the scope of the crisis combined with a lack of funding and access, humanitarians “are asked to cover gaps that are well beyond” their mandates and capacities.

The country is on the brink of famine, with 60 per cent of the population not knowing where its next meal is coming from, according to the UN envoy.

The current food security crisis is a man-made disaster resulting not only from decades of poverty and under-investment, but also as a war tactic through economic strangulation.

He made clear that “the current food security crisis is a man-made disaster not only resulting from decades of poverty and under-investment, but also as a war tactic through economic strangulation.”

Pointing out that Yemen imported 90 per cent of its food even before the crisis, he painted a picture of the difficulty in bringing food into the country now.

“Although food may be physically available in the market, it is actually financially out of reach for many of the poor families at this point in time,” explained Mr. Lootsma.

The UNDP Country Director said that while cholera is not new to Yemen, “the collapse of the health, water and sanitation sector due to a lack of salaries and damaged infrastructure” exacerbated the situation.

He added that almost half of the health facilities are no longer functioning because they are partly or completely damaged, a situation made worse because “doctors and nurses are not coming to work because they have not been paid and looking for income elsewhere.”

With almost 1.2 million civil servants having not been paid since September 2016, many businesses have collapsed.

The conflict continues unabated as remaining infrastructure continues to be shattered –garbage is piling up and water treatment facilities are marginally functioning, creating ideal conditions for diseases – and civilian casualties continue to mount, rendering Yemen as the world’s largest cholera crisis, according to Mr. Lootsma.

With its population set to double by 2050, pressing development challenges – including changing climate, negative production and malnutrition – will have a great impact on Yemen’s future.

Mr. Lootsma called on the international community to redouble their efforts, warning that time is running out to find the brakes to stop the bus before it goes off the cliff.