How Capitalist Banks Are Creating the Next Financial Crisis

“The Fed is on the verge of another major disastrous monetary policy shift and experiment.” 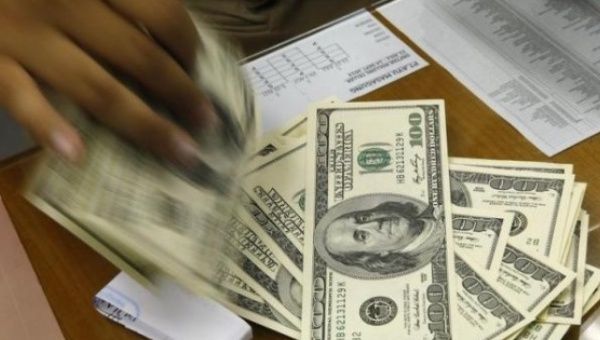 17 Aug 2017 – As central bankers, finance ministers, and government policy makers head off to their annual gathering at Jackson Hole, Wyoming, August 24-26, 2017, the key topic is whether the leading central banks in North America and Europe will continue to raise interest rates this year; another topic high on the agenda is when the three major central banks – the Federal Reserve, European Central Bank and Bank of England – might begin to sell off their combined US$9.8 trillion dollar balance sheets that they accumulated since the 2008-09 banking crisis.

RELATED: Why US Vulture Funds Are Fighting Over Puerto Rico’s Bankruptcy

But the more fundamental question – little discussed by central bankers and academics alike – is what are the likely effects of further immediate rate hikes and/or commencement of central banks’ balance sheet reductions? The assumption is further rate hikes and sell-offs will have little negative impact on the real economy or financial markets. But will they? The effects of hikes and sell off will prove the opposite of what they predict.

Central banks in the US and Europe were grossly in error predicting in 2008 that massive liquidity injections and zero interest rates would re-stimulate their economies and return them to pre-crisis real GDP growth rates. They are now about to repeat a similar error, as they presume that raising those rates, and retracting excess liquidity by selling off balance sheets, will not have a significant negative impact on the real economy or financial markets.

Central banks’ balance sheets have been growing for almost nine years, driven by programs of zero-bound (ZIRP) interest rates and the introduction of firehose liquidity injections enabled by quantitative easing, QE, bond and other securities purchases.

After eight years, the official consensus among central bankers and government policy makers is that the 2008 shift to unlimited central bank liquidity and zero (or below) interest rates is now over. The front page business press and media lead story is that central banks are now about to embark collectively in a new direction – raising their benchmark rates and selling off their massive, bloated balance sheets. But don’t bet on it. They may find sooner, rather than later, that rates cannot be raised much higher and that balance sheets—now totaling US$9.8 trillion for the US, UK and Europe alone—may not be reduced much, if at all, without provoking a further slowdown of their still chronically weak real economic recoveries, or without precipitating a serious contraction in equity, bond and other financial asset markets.

Globally, balance sheet totals are actually far greater than the US$9.8 trillion accumulated to date by the big 3 central banks—the Fed, Bank of England, and European Central Bank. When other major central banks, like Switzerland’s, Sweden’s, Canada’s and others are added, it’s well more than US$10 trillion. And then there’s the nearly $5 trillion balance sheet of the Bank of Japan and the more than $5 trillion of the People’s Bank of China. Worldwide, central banks’ balance sheets therefore exceed well over US$20 trillion…with the total still growing.

Attempting to sell off such massive balance sheet holdings will prove far more daunting than those central banks now anticipate. And their coordinated raising of interest rates risks precipitating another recession – given their fundamentally weak economies with chronic low bank lending, slowing investment, stagnating productivity, contracting public investment, and lack of real wage income gains. For the global economy has undergone a major structural change in recent decades that has been rendering central bank interest rate policies increasingly ineffective with regard to stimulating real investment and growth, while simultaneously contributing to further financial fragility as well.

The US Economy Is Fragile and Weakening—Not Robust and Stable

All eyes are on the US central bank, the Fed, and what signals it gives at the Jackson Hole August 24-26 gathering, and the Fed’s subsequent policy committee in September. Will it continue to raise rates? Will it announce formally a schedule for balance sheet reduction in September? If the latter, will the announcement of sell-off be so minimal and token that it will generate a mere 0.25 percent hike in rates by year end 2018, as some pundits predict? Or will the psychological effects on investors – who have enjoyed eight years of record equity, bond, property, and derivatives asset price and thus extraordinary capital gains – consider the announcement as the signal to “cash in” and take their money and run, given the bubble levels already attained in equities, some bond markets, and real estate? And should the Fed continue to raise interest rates at a pace of 3 to 4 a year, what will be the impact on the US real economy?

Economic potholes are beginning to appear in a number of places. Bank lending to US business has declined sharply, now growing at only 2 percent; consumer loans for auto, mortgages and credit cards have halved over the past year; real investment and productivity have nearly collapsed; the so-called “Trump Bump” has dissipated; government investment has contracted below 2007 levels and infrastructure spending is still but a discussion envisioned for 2019 at the earliest, if at all; and job growth has been consistently low quality, resulting in wage stagnation or worse for the vast majority of the labor force.

In this unstable environment the Fed has nonetheless has announced plans to continue to raise interest rates and to begin selling off its balance sheet. The question is just how much and when? Consensus thinking at the Fed is that rates can continue rising 3 to 4 times a year at .25 basis points a crack through 2019 without serious negative effects. And that the Fed’s balance sheet can start selling off immediately in 2017, initially at a modest rate of $10 billion a month, accelerating further at a later date.

But these were the same central bankers who believed their QE and zero bound rate programs would return the US real economy to robust growth by 2010 but didn’t; who maintained the Fed’s massive liquidity injections would attain a 2% goods and services inflation rate, which it still hasn’t; who argued that once unemployment fell to 4.5 percent (in the US), wage growth and consumption would return to past trends and stimulate the economy, which has yet to occur; and who argued in 2008, also incorrectly, that Fed QE programs providing bankers virtually free money would stimulate bank lending and in turn real investment and growth. The Fed’s latest predictions could prove no more correct about the consequences of further rate hikes and balance sheet reductions than they were about QE, ZIRP, and all the rest for the past eight years.

It’s Not Your Grandpa’s Global Economy

To assume that selling off that magnitude of securities – even if slowly and over extended time – will not have an appreciable impact on nominal interest rates is the kind of assumption that resulted in previous predictive errors circa 2008 since the possible effects on investors’ psychological expectations of more rate hikes and balance sheet selling are completely unknown.

After eight years of treating symptoms and not the disease, the global financial system has become addicted to super-low rates and to continued central bank excess liquidity provisioning. What started in 2008 as a massive, somewhat coordinated central bank lender of last resort experiment – i.e. global bank bailout – has over the past eight years evolved into a more or less permanent subsidisation of the private banking and financial systems by central banks. The system has become addicted to free money. And like all addictions, the habit won’t be broken easily. That means central bankers’ plans to raise interest rates in the immediate months ahead will likely “hit a wall” well before the announced rate levels they are projecting. Plans to sell off balance sheets will almost certainly be limited to the US Fed for some time. The ECB and BOE – as well as Bank of Japan and others – will wait and see what the Fed does. The Fed will proceed at a snails pace that will represent little more than mere tokenism, and in the event of further slowing of real GDP growth, or US financial markets correcting in a major way, it will halt selling altogether. In short, there will be little Fed balance sheet reduction before the next recession, and a continued escalation of balance sheets by central banks globally. Central banks will enter the next recession with further bloated balance sheets.

After eight years of treating symptoms and not the disease, the global financial system has become addicted to super-low rates and to continued central bank excess liquidity provisioning.

The Fed is thus on the verge of another major disastrous monetary policy shift and experiment. It will be unable to raise interest rates as it has announced, by 3 to 4 times a year for the next two years. Nor will it be able to sell off much of its current balance sheet, since anything but token adjustments will accelerate rates even higher. In this writer’s opinion, the federal funds rate cannot be raised above 2 percent, or the 10 year Treasury yield much above 3 percent, without precipitating either a serious financial market correction or an abrupt slowing of real economic growth, or both.

What the eight years since the 2008-09 financial crash and great recession reveals is that the major central banks, led by the Fed, have painted themselves in a corner. The massive liquidity provided to their banking systems – engineered by zero rates and QEs – failed even to adequately bail out their banks. Today more than US$10 trillion in non-performing bank loans still overhang the major economies, despite the more than US$20 trillion added to their central bank balance sheets in just the past eight years.

The fundamental changes in the global economy and radical restructuring of financial, capital and labor markets have severely blunted central banks’ main monetary tool of interest rate management. Just as reduction of rates have little positive effect on stimulating real investment and economic growth, rising rates will have a greater negative impact than anticipated on investment and growth. The Fed and other central banks may soon discover this should they raise rates much faster and further or engage in more than token balance sheet reduction.

Central bankers at the Fed, the BOE and ECB will of course argue the contrary. They will promise the economy can sustain further significant rate hikes and can commence selling its balance sheet without severe negative consequences. But these are the same people who in 2008 promised rapid and robust recovery from QE and ZIRP programs that didn’t happen. What happened was an unprecedented acceleration in financial asset markets as equity and bond prices surged for eight years, high end real estate prices rose to prior levels, derivatives boomed, gold and crypto-currencies escalated in value, and income inequality soared to record levels – all fueled by the massive US$10 trillion central bank liquidity injections that drove interest rates to zero or below. And now they tell us they plan to raise those rates without serious negative effects. Anyone want to buy the Brooklyn Bridge? I think they’re also trying to sell that as well.

Jack Rasmus is the author of  Systemic Fragility in the Global Economy, Clarity Press, 2015. He blogs at jackrasmus.com. His website:  www.kyklosproductions.com.