The Demons Within: India’s Tryst with Torture 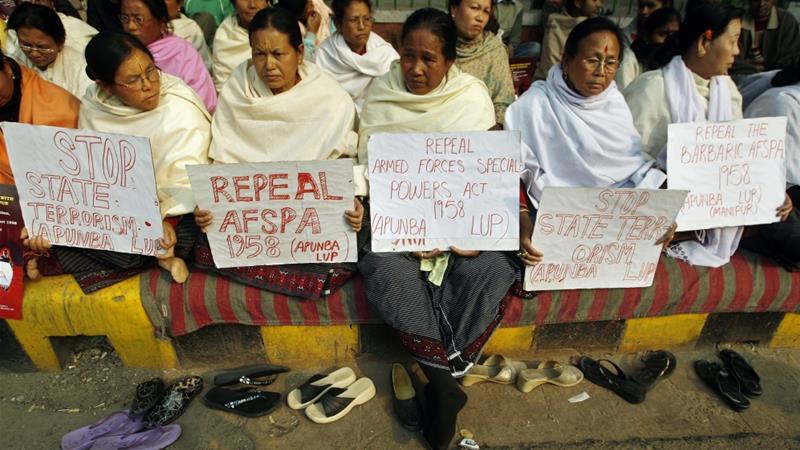 Women from the northeastern Indian state of Manipur protesting against the AFSPA, which gives troops the right to arrest and shoot at suspected rebels. [Adnan Abidi/Reuters]

27 Aug 2017 – Indian human rights defender Babloo Loitongbam, who witnessed numerous instances of torture by Manipur security forces over the years, says that he has a particularly vivid memory of one victim: Khuraijam Pranam Singh.

“His intestine was dangling out of his stomach. He was a young man and in a completely vegetative state,” says Loitongbam. “That’s the first impression of torture that still stays with me”.

In July 2000, 23-year-old Pranam was picked up by Indian paramilitary forces in Manipur without any warning or explanation. He was never officially charged with a crime, but he was suspected of “supporting an armed group”, so he was detained and tortured. Thanks to the courageous efforts of a handful of human rights defenders and lawyers, after over two weeks of torture, he was freed.

In India’s northeastern state of Manipur, this incident isn’t the first of its kind. Resistance against alleged Indian domination and territorial claims has given rise to nearly 30 active groups that aim to secede the state from India. Security forces in the region use this perceived threat to arrest, detain and torture alleged supporters of “the resistance” with impunity.

In October 2000, only two months after his arrest, Pranam attended a session held by the Independent Peoples’ Inquiry Commission (IPIC) set up to inquire into human rights violations in Manipur. Barely able to walk, Pranam was determined to narrate to the commission how he was stripped, his hands and legs were tied together and his body was turned upside down. The then 23-year-old had been brutally tortured by the arresting party.

READ MORE: Is free speech under threat in Modi’s India?

“A rod was inserted up my anus and vigorously stirred thereby causing severe pain and bleeding,” he said. “The wooden rod broke inside my anus. Chilli powder was also applied to my eyes, anus and genitals as a result of which I could not urinate.”

This incident was not the first or the last of its kind in Manipur.

In July 2004, only four years after Pranam’s ordeal, 32-year-old Thangjam Manorama Devi was taken from her house in the dead of the night by members of the Indian para-military forces for allegedly working for an armed group. The next day, her badly mutilated dead body was found only three kilometres away from her house. Her genitals were covered with bullet wounds, in an alleged attempt to cover up any evidence of rape.

In the absence of necessary checks, torture follows a constant, sometimes cyclical pattern. It repeats itself in different locations, with the same, or aggravated cruelty.

A military inquiry into the incident, which took place in 2004 but made its findings public a decade later, unearthed the horrors Manorama endured before her death.

The inquiry report said that Manorama, who was “clutching on to her mother Khumaleima”, was dragged out screaming “Ima Ima Khamu (mother, mother please stop them)”.

The disturbing report documented in detail the torture initially carried out inside her house. She was taken to a room and her helpless brother managed to catch a glimpse of Manorama, her hands behind her back, while a plain-clothes officer inserted a kitchen knife under her underwear.

Unfortunately, it is easy to guess the verdict of the Army Court of Inquiry. Not one person has been punished for this crime so far.

The government has used the armed struggle to normalise torture and impunity in this part of India. On July 1987, the Indian Army carried out a military operation dubbed “Bluebird” at the Manipur village of Oinam. The operation was in retaliation for an attack on an army post by the members of an armed group that left nine soldiers dead. It remains one of the worst instances of India attacking its own citizens. Houses were burned, schools and churches dismantled and villagers forced into hard labour. Several women were raped in public and 14 villagers brutally killed.

Amnesty International comprehensively documented the human rights violations committed during the operation. According to its report, hundreds of villagers were tortured; subjected to electric shocks, mock executions, roller treatment, suspension and beatings.

The northeast’s experience with torture is not unique. In April this year, an 11-second clip showing a Kashmiri man bound to the front of an army jeep in Indian-administered Kashmir was widely shared on social media. A sign reading, “I am a stone pelter” was attached to the man’s chest. According to witness statements, the man, later identified as 26-year-old Farooq Ahmad Dar, was driven around in this position for five hours across 17 villages. The officer responsible was rewarded for “his for sustained efforts in counterinsurgency operations”.

This was not an isolated incident. In 2010, the cables released by Wikileaks exposed torture being used an integral part of India’s efforts to keep Kashmir under control. Today, torture in Indian-administered Kashmir, just like Manipur, remains an open secret.

The necessity for anti-torture laws

Back in 1955, the Indian army brought war and bloodletting to the Naga Hills region in northeastern India in an effort to stop nationalist and secessionist movements by Naga tribes. Nagas, who wanted to remain autonomous after India’s independence, were subjected to brutal methods of village regrouping that mirrored British operations in Malaya. Communities and families were torn apart.

In 1958, desperate to take the region under full control, the government passed the draconian Armed Forces Special Powers Act (AFSPA), giving the armed forces wide powers to arrest, shoot, kill, occupy and destroy property in the Naga Hills with impunity. The scope of this act was later extended to other conflict ridden states including Manipur and Kashmir. In time, AFSPA among other “lawless laws” became the root cause of impunity and torture in India.

In 1997, India signed the United Nations Convention Against Torture and Other Cruel, Inhuman or Degrading Treatment or Punishment, but is yet to ratify it. In 2010, the Prevention of Torture Bill was prepared as an enabling legislation to ratify the UN convention, but it lapsed with the dissolution of the 15th Lok Sabha in May 2014. Today, AFSPA is still in force, but there is still no legislation to prevent torture in India.

In the absence of necessary checks, torture follows a constant, sometimes cyclical pattern. It repeats itself in different locations, with the same, or aggravated cruelty.

In 1966, India went as far as to use its fighter jets against armed rebels in the northeastern state of Mizoram. 13 civilians were killed in an unthinkable use of force by the Indian state, against the very people it is entrusted to protect. Village regroupings followed. The tactic of using the Indian air force against Indians recurred in April 2010; then Home Minister of India P Chidambaram thought if necessary, a mandate could be altered and air power used by the state to fight extremism in Chhattisgarh in Central India.

OPINION: Resistance is a way of life for Kashmiri youth

As an alternative to using fighter planes or pellet guns against itself, India needs to reckon with the fact that state sanctioned torture is futile. The Statistics from the National Crime Records Bureau show that 1,145 unnatural deaths took place in prisons across India between 2005-2015. This is evidence that a stringent legislation is an imperative step towards preventing widespread custodial violence.

Today, state torture in India is no longer restricted to its northeastern corner. Be it in Manipur or Kashmir or Chhattisgarh, torture has become the norm in counterinsurgency operations or in police custody and successive governments chose to turn a blind eye to this reality.

On the 70th anniversary of India’s independence, it is high time for the Indian government to end its tacit approval of torture as a counterinsurgency method. It is, of course, necessary for the government to address any kind of violence and domestic threat, but it should not do this through violent methods. After all, there needs to be a wider difference between pre-independence India, and the current democratic state.

India needs to stop operating against its own people.

Arijit Sen is a human rights researcher. Arijit is a three-time recipient of India’s Ramnath Goenka Award for Excellence in Journalism for his reporting. Follow him on Twitter: @senarijit