41M Affected by South Asia Floods, but Who Knows about It?

The flooding and landslides have swept Bangladesh, India and Nepal for weeks, killing over 1,200 people. 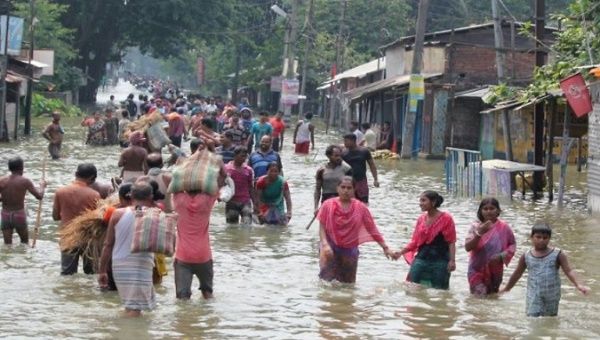 30 Aug 2017 – As Harvey continues to batter Texas and Louisiana in the United States, where nearly 30 people are reported dead, the flooding and landslides that have swept Bangladesh, India and Nepal for weeks have killed over 1,200 people, displacing millions so far.

Western media, for the most part, has paid little attention to the catastrophic flooding that has swept these South Asian regions.

Some 41 million people have been affected by the torrential downpour, according to the U.N. Office for the Coordination of Humanitarian Affairs.

Schools and colleges have been shut and many trains and flights to and from most of these countries have been canceled. Some international aid agencies have estimated thousands of villages have been cut off from clean water and electricity for days now.

Francis Markus, a spokesperson for the International Federation of Red Cross and Red Crescent Societies, in Kathmandu, Nepal, told the New York Times, “This is the severest flooding in a number of years.”

“We hope people won’t overlook the desperate needs of the people here because of the disasters closer to home,” Markus said, referring to Harvey.

The annual monsoon between the months of June and September brings heavy downpours to South Asia but this year’s monsoon also brought devastation.

According to the IFRC and Red Crescent, Bangladesh is facing the worst flooding in 40 years as reportedly one-third of the country is underwater. Over eight million people in Bangladesh have been affected with nearly 700,000 homes damaged or destroyed. At least 134 people have died so far. And 2,000 medical teams have been deployed to help in the affected areas.

In India, the floods have affected over 32 million people killing at least 850. While in Nepal, 150 people have died and nearly 90,000 homes have been destroyed in what the U.N. has called the worst flooding in the country in a decade.

The three countries are leading the rescue operations along with the international aid organizations.

As part of the rescue operations, the U.N. has set up nearly 2,000 flood relief camps and the local agencies are retrieving people left stranded via helicopter. The crisis is expected to deteriorate further as torrential downpours continue in some flood-prone areas.

Aid workers have expressed concern over water-borne diseases such as malaria and diarrhea. “Their most urgent concern is to accessing safe water and sanitation facilities,” OCHA said.

Rajan Kumar, a federal interior ministry official in New Delhi overseeing the relief efforts, told the Telegraph that at least 850 people had been killed in six flood-affected Indian states in the past month.

“If you compare the shelter conditions in Bangladesh to Texas, as dire as the condition may seem in Texas, typically, we would at least have safe structures on safe ground — not in flood plains,” Jono Anzalone, the vice president of international services at the American Red Cross, told NPR.

“For better or for worse, when people look at the U.S. response system, we have a very mature federal disaster response system … You don’t see that in Nepal, Bangladesh or India. In Nepal and Bangladesh, the governments simply don’t have the resources.”