ARSA: Who Are the Arakan Rohingya Salvation Army?

“Suu Kyi is lying, so are the army; there is no al-Qaeda in Rakhine.” 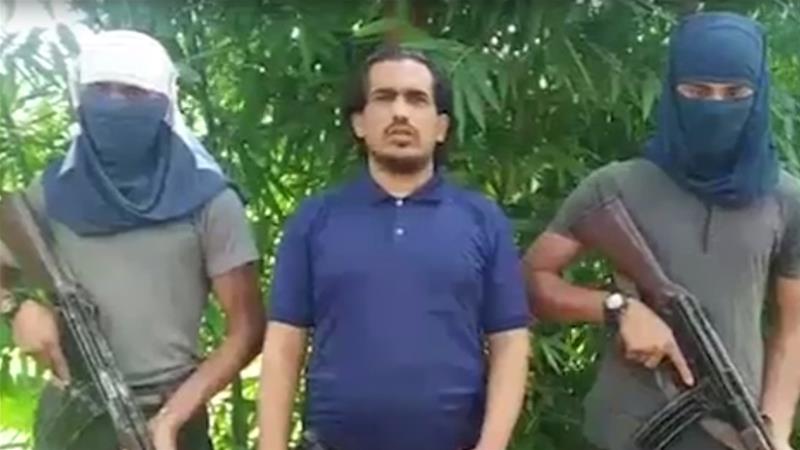 ARSA says its aim is to ‘defend and protect’ the Rohingya.
[ARSA video, screengrab from YouTube]

13 Sep 2017 – More than 300,000 Rohingya have been forced to flee their ancestral homeland in Myanmar’s western region of Rakhine amid a campaign of murder, torture, arson and mass rape by Myanmar security forces and allied Buddhist mobs.

The latest mass exodus, which began on August 25, comes after a small group of Rohingya men attacked around 30 police and army posts in Rakhine State, killing 12 officers, according to the government.

Residents and witnesses have told Al Jazeera that the army retaliated with disproportionate force, burning down scores of Rohingya homes and villages as they tried to hunt down the attackers.

The Myanmar army has put the death toll at around 400, saying most of those killed were rebels. Residents, however, say it is more than 1,000 people.

The group that carried out the attacks has insisted it is acting in the best interests of the Rohingya – but who are they and what do they want?

Who are the ARSA?

Despite facing decades of oppression, the predominantly Muslim Rohingya had largely refrained from violence.

Rohingya living in Maungdaw township told Al Jazeera that the men, numbering only a few dozen, stormed the outposts with sticks and knives, and after killing the officers, they fled with light weaponry.

“For over 75 years there have been various crimes and atrocities committed against the Rohingya … that’s why we carried out the October 9, 2016, attack – to send a message that if the violence is not stopped, we have the right to defend ourselves,” he said.

Maung Zarni, a non-resident fellow at the European Centre for the Study of Extremism, told Al Jazeera that the group’s actions were borne out of “systematic abuses of genocidal proportions” by the Myanmar military.

“This is not a terrorist group aimed at striking at the heart of Myanmar society as the government claims it is,” Zarni said.

“They’re a group of hopeless men who decided to form some kind of self-defence group and protect their people who are living in conditions akin to a Nazi concentration camp,” he added.

“ARSA’s actions resemble Jewish inmates at Auschwitz who rose up against the Nazis in October 1944.”

What do they want?

ARSA says it is fighting on behalf of more than a million Rohingya, who have been denied the most basic rights, including citizenship.

“Our legitimate self-defence is a necessary struggle justified by the needs of human survival,” Jununi said in a video uploaded to social media on August 15, 2017.

“ARSA has been in Arakan for three years and has not brought any harm or destruction to the life and properties of the Rakhine people and Rohingya.”

The Myanmar authorities, however, paint a different picture, saying they are Muslim “terrorists” who want to impose Islamic rule.

Anagha Neelakantan, the Asia Programme Director at the International Crisis Group, told Al Jazeera that there was no clear ideology underpinning the group’s actions.

“From what we understand the group is fighting to protect the Rohingya and not anything else,” she said.

It’s unclear how many fighters the group currently has, Neelakantan explained, adding that there was “no evidence that ARSA has any links to local or international Jihadist groups, or that their aims are aligned”.

Why did they form?

For decades, the Rohingya have faced entrenched discrimination and other human rights violations by the country’s military governments.

In 1948, when the British left Myanmar, the military who succeeded them launched a campaign to create some sense of nationhood.

Despite them having deep historical and ancestral roots within the pre-colonial borders of Myanmar, the military would embark on several campaigns to ethnically cleanse the nation of the Rohingya.

Since 2012, incidents of religious intolerance and incitement have increased across the country, with the Rohingya and other Muslims frequently attacked and portrayed as a “threat to race and religion”.

Are they linked to al-Qaeda or ISIL?

Aziz Khan, a Rohingya living in Maungdaw township, told Al Jazeera that the military and civilian government were “scare-mongering” and there was “no evidence to suggest the group had any ties to any prescribed terrorist groups”.

“The media has latched onto the government’s statement that these men are ‘terrorists,’ this is a lie, [Aung San] Suu Kyi [Myanmar’s de facto leader] is lying, so are the army, there is no al-Qaeda in Rakhine.”

“These men are not well equipped. All they have are sticks, swords and guns they seized from military outposts. No bombs.”

In the August 15 video, Jununi said that the ARSA was “not affiliated with any elements of terror, nor does it receive funds from any other organisation”.

“While the group may be receiving funds from the Rohingya diaspora in Saudi Arabia, the group is not calling for an Islamic state nor are they separatists, rather it’s a call for peace and ethnic equality,” Zarni said.