Poetry Steeped in Sarcasm and Politics 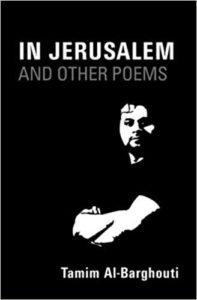 19 Sep 2017 –In the world of Arabic poetry, Tamim Al-Barghouti is a bit of a star. In 2007 he appeared on the Arabic-language TV show Prince of Poets, a hugely popular competition which saw authors reciting their verses to audiences of millions.

His stirring poetic rendition of “In Jerusalem” is comparable to Mohammed Assaf’s vocal performance of “Raise the Kuffiyeh” during the final of Arab Idol, which saw both audience and judges simultaneously crying and dancing.

On a more sober note, Al-Barghouti is the author of an impressive six collections of verse, some in colloquial Egyptian, others in the complex classical form of Arabic.

One might call him a member of a modern Arabic literary aristocracy: His father is celebrated Palestinian poet and memoirist Mourid Barghouti and his mother, the Egyptian novelist and scholar Radwa Ashour, who died in 2014 and translated many of the poems in the newly published collection In Jerusalem and Other Poems, 1997-2017.

Despite the success of Al-Barghouti’s books in Arabic, this slim volume of his poems is his first collection translated into English, although he is entirely proficient in the language. Some of the poems in this anthology were translated by the poet himself, and he is the author of several English-language books and academic articles on political theory.

Al-Barghouti’s poetry very much reflects this multi-faceted background and range of interests. It is rich with references from classical Arabic, ancient Mesopotamian and Biblical literatures, but also redolent with anger that springs both from the poet’s life as the son of an exiled Palestinian and as an activist in the movements for change in the form of the uprisings that swept through the Arab world in 2010.

Deft use of references

The political side of Al-Barghouti’s life often comes through in witty, sarcastic, bitter poems stating observations and allegories. Although the most apparently obvious of these, “The State,” which describes in detail how a herd of deer are rendered helpless only by the fear which stops them uniting against the hyena, knowingly denies through the poem itself that it’s an allegory at all.

In “Genesis,” the opening poem of the collection, a mouse gets stuck in a trap along with a number of pursuers, akin to the English-language children’s song, “There Was an Old Lady Who Swallowed a Fly.” What begins with a piece of cheese on a board pasted with glue to catch vermin ends with a cat, a dog, a child and its parents, a policeman and so on, washed away in a rumor-ridden version of Noah’s Ark.

Among the entities also trapped is the State, “realizing its Security was absent / Got scared, and went to look for it,” with absurd consequences. The poem ridicules the (possibly Egyptian) state and security services for the fear which underlies their outward displays of strength.

Meanwhile, “The Little Sky in My Hands,” a poetic meditation on power, reassigns politicians the role of bartenders so that they might do an honest day’s work. Likewise:

I try to turn a policeman into a human being,
since he looks like one …
I might even create kind policemen, just for laughs

Contrasting sharply with these politicized observations are moments of introspection on love and depression, or of profoundly beautiful poetic imagery, such as the following from “Nothing Radical: The Prophecy”:

That large drop of honey lighting the West

Will complete its daily descent into the sea
And melt – the sea becoming a little sweeter.

The immediacy of open political commentary is, however, balanced by the depth of Al-Barghouti’s deft use of mythology and classical references, combined with a light touch which stops them from being pretentious.

A work, titled “God and Goat,” featuring some of the gods of ancient Babylon, for instance, pays homage to the ancient heritage of Iraq and contemplates the cultural devastation wrought by the American-led invasion of that country in 2003.

But it is also a wry look at the way in which powerful rulers are often shallow and stupid, mocking them most obviously through the gods’ debate over how to handle the shame brought when one of them falls in love with – and is rejected by – a she-goat.

“What a scandal! What a disgrace!” laments the god Enlil. “… each and every night, we must collect our brother from doorsteps and backyards, chasing a goat! And hear those yellow-toothed peasants joking.”

And “The Caliph and the Poet,” part of a longer, almost epic work which intertwines historical figures with something akin to Latin American magical realism, depicts the European Crusader invading force of medieval Syria and Palestine as cannibals and butchers.

But it also mocks and undermines the Caliph and other leaders who failed to stand up to Crusader forces, leaving civilians to suffer instead. The parallels with modern Palestinian critiques of Arab politicians who fail to live up to their populist promises of support against Israel are hard to ignore.

The translation, as befits the work of a family of multilingual poets and authors, is largely fluid, with occasional footnotes aware that some references, especially those from classical Arabic poetry, may need explanation for an Anglophone readership.

There are occasional blips. One noticeable example is a verse from “In Jerusalem” itself, which describes the life of the famous Mamluk Sultan Baybars, who led the army which defeated the Mongols at Ain Jalut, Palestine, in 1260, sparing the Levant the bloody slaughter to which Baghdad had fallen victim.

A confusion with the Arabic, however, has him defeating the Moghuls – distant descendants of the Mongols, for sure, but actually a dynasty which ruled India until their defeat by British imperialism.

And while another poem, “The Raid,” is obviously an emotional and angry response to the bombing of civilians – In Gaza? In Iraq? – one senses that something of the passion and pain which drove the original has not carried over into the translation.

But this does little to mar what is mainly an enjoyable, accessible collection of poetry, spiced with sarcasm and politics but also rich with cultural and historic references, blended together as an admirable introduction to Al-Barghouti’s poetic work.

Sarah Irving is author of a Biography of Leila Khaled, of the Bradt Guide to Palestine and co-editor of A Bird is not a Stone.