Rohingya Genocide and the Liberal States: Dancing with the Demon of Destruction

19 Sep 2017 – Arakan is burning. The Burmese rulers appear to be on the brink of achieving their much-longed-for a “final solution” of the Rohingya question. A reign of terror has been let loose in northern Arakan. Rohingyas are being shot, butchered, disemboweled, torched and drowned. Women are being raped and gang-raped, and children are being mutilated often in front of their helpless parents and siblings. To stave off foul smell from the rotting corpses, they are either being charred or dumped in shallow mass graves, often dug under duress by the ones who are to meet the same fate. Village after village are being torched, resulting in “midnight in summer noon.” In short, genocide of unimaginable barbarity is in progress against the Rohingyas. 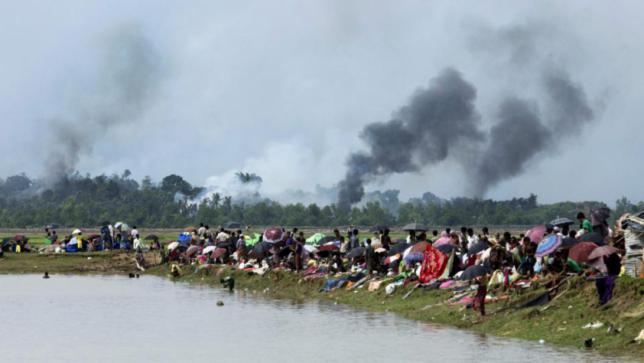 Those who managed to flee had harrowing tales to share. A mother who was away from home when attackers came later found her baby daughter cut into halves; a paralysed elderly woman unable to run was torched to death; people trying to flee atrocity were indiscriminately fired upon from helicopter gunships. Many survivors suffer from the heart-wrenching burden of not being able to provide the last rites to their loved ones, not even sheets to cover the bodies; a fleeing mother has to live with the agonising memory of watching vultures zeroing in on the mutilated body of her dead son whom she was unable to bury.

Their flight was no less distressing. Most walked for days on difficult terrains through hills, jungles and knee-deep water, often drenched in monsoon rain, constantly in fear of being attacked by the military or their cohorts, and by armed goons who pounced on them for whatever meagre valuables they were carrying. Many narrated that their fellow travellers’ journey was harshly cut short as they could no longer endure hunger and hardship, some falling victim to snakebites. Losing family members as they ran in different directions during the mayhem and at night-time treks in deep jungles was also reported.

Footage of Rohingya villages in flames:

When they were about to cross the border with Bangladesh and were beginning to feel relieved, they were faced with the stark reality of denial of entry. Left with no option, they had to pick up both energy and hope to undertake the next part of the trip, not to mention through more perilous and vulnerable routes. Others capable of dispensing fair sums of money secured the services of fixers, thriving on facilitating border crossing. The story of exploitation of the escaping people by unscrupulous locals has been aptly covered by this daily in several reports. For instance, a fleeing family was paid only Tk 8,000 (less than USD 100) in exchange for ten cows that they managed to bring with them.

This is the gruesome reality of the hundreds of thousands of Rohingyas escaping the genocide being committed by the Burmese authorities. The world is witnessing the Arakan version of Rwanda and Srebrenica massacres. Commentators, campaigners, politicians, Nobel laureates, faith leaders and general masses in many parts of the world have been stunned by the stance taken by the unofficial head of the Burmese government, Aung San Suu Kyi, the icon of liberty and freedom. Strong criticism and caricatures of the fallen idol have flooded the social and print media. Some view it as her inability to stop the genocide crafted and executed by the Burmese military against her wishes; the less charitable ones accuse her of being an active accomplice.

As Mark Farmaner of Burma Campaign UK, in his incisive piece published on HuffPost on September 13, 2017, reminded us that while Suu Kyi continues to receive the flak for failing to live up to her image, it is the military that completes the unfinished agenda of ridding Arakan of Rohingyas. Quite cogently, he puts forward the case that the powerful states, including those who present themselves as champions of human rights and rule of law and style themselves as moral guardians of countries like Bangladesh, are pampering and promoting the head of the Burmese army, Senior General Min Aung Hlaing. Included among are the US, Germany, Italy, Austria, the European Union, Japan and India.

Hlaing is reputed for his hard-line stand in dealing with Kachin, Shan and Rohingya communities. The General “is guilty of ethnic cleansing, he is under investigation for war crimes and crimes against humanity and he is the biggest obstacle to democratic reform,” effectively running a parallel government in the country.

The Obama administration lifted most of the US sanctions targeting the country’s military in October 2016; the British government continues to provide training to the army; Germany and Austria accorded “red carpet treatment” to the General when he visited those countries; Italy hosted him last year; and the EU “even had him address their prestigious annual meeting of military heads of EU countries.” The Prime Ministers of Japan and India were perhaps honoured to grant him audience. The latter provides the Burmese army a range of military hardware from artillery guns and rocket launchers to war gaming software. Quite understandably, the Israel and Burma relationship is premised on transferring knowledge of Israeli oppression and dispossession of the Palestinians. As Israeli rights activist Ofer Neiman observes, “Weapons used against the Palestinians are being sold as ‘field-tested’ to some of the worst regimes on the planet,” including Burma.

This policy of placating the Burmese military commander in his vicious genocidal campaign against Rohingyas and crimes against humanity harks back to the policy of appeasement of the western alliance on Nazi Germany. The above reality explains the palpable reticence of western liberal states in holding the Burmese generals accountable for genocide and crimes against humanity. Their duplicity becomes brazen when they leave no stone unturned to prosecute the likes of Robert Mugabe and Omar Al Bashir for similar charges.

Thus, it is not only the Burmese generals who are to be made accountable for genocide of the Rohingyas and crimes against humanity perpetrated against other nationalities in Burma, their liberal external patrons also have a case to answer. After all, it is the latter’s relentless pursuit of resources, strategic and commercial interests, including that of arms trade, bereft of human rights considerations, that has shored up this brutal regime. With impunity it unleashed the demon of destruction in this 21st-century Burma. Sadly, the much-celebrated corpus of human rights declarations, covenants and conventions lies in tatters as do the books of nursery rhymes of Rohingya children in burnt-out villages of Arakan.

C R Abrar teaches International Relations at the University of Dhaka. He researches and writes on rights and migration issues.