6 Sep 2017 – Highlighting increased atrocity crimes – genocide, war crimes, ethnic cleansing and crimes against humanity – in many parts of the world, United Nations Secretary-General António Guterres today called for concrete action to protect the vulnerable and to reverse such negative trends.

“All of us are well aware of the grim human reality that lies behind the words, ‘war crimes’, ‘crimes against humanity’, ‘ethnic cleansing’, and ‘genocide’,” Mr. Guterres said at a dialogue held at UN Headquarters on the responsibility to protect, commonly referred to as ‘R2P’.

“It is time to move beyond the conceptual debate towards improved protection of people from atrocity crimes.”

Referring to his report on responsibility to protect, the UN chief also stressed that the Organization must give far greater attention to address the challenges before they spiral out of control. 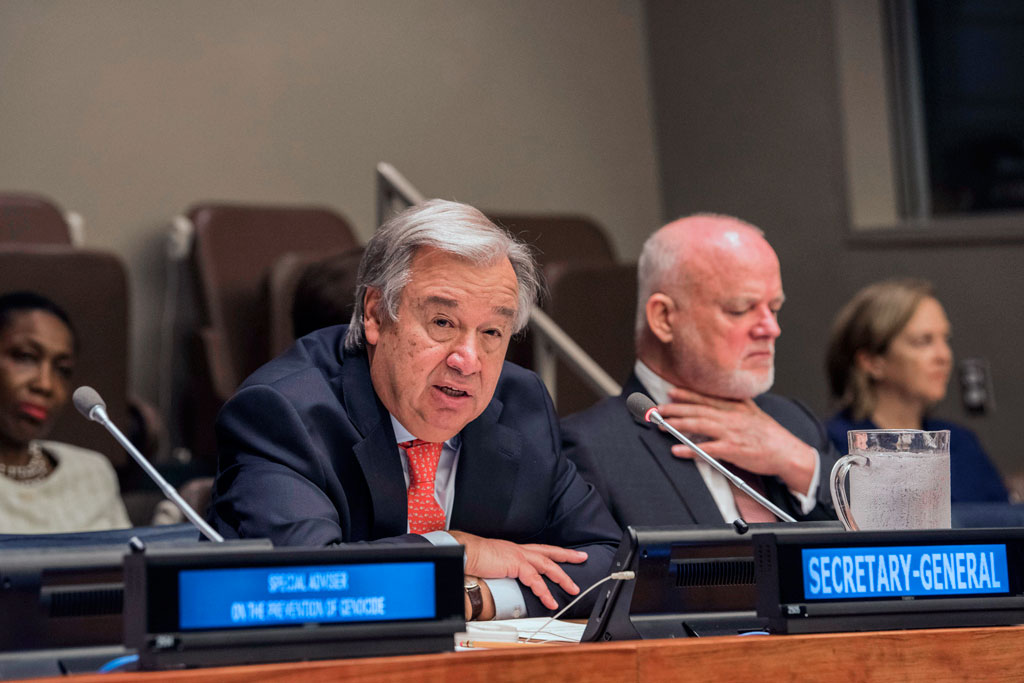 In particular, he underscored the need for practical steps, noting that his report includes options that can be taken in a relatively short time, without major operational or institutional requirements.

He also urged the Human Rights Council (the highest UN intergovernmental forum on human rights) as well as the Security Council to further strengthen their capacity to address the risks of atrocity crimes and other violations of the responsibility to protect, and called for improving the use of all three UN pillars – peace and security, development, and human rights – for better early warning and prevention, as envisaged in the Human Rights Up Front action plan.

Noting that the responsibly to protect agenda generates some discomfort for a number of UN Member States, with the primary concern that it will be used to “impose” international approaches that may harm national sovereignty, Mr. Guterres said that the success of the UN implementing its mandates depended on national actors being able to deliver on their sovereign responsibilities.

“Our shared challenge is to use the principle of the responsibility to protect to achieve the goals that were originally envisaged. I am convinced that open and constructive discussion among concerned States can overcome any remaining differences,” he added.

Further, the Secretary-General recalled the outcome document of the 2005 World Summit, which was adopted unanimously and which reinforced that States have the primary responsibility to protect their populations from atrocity crimes as well as assist States if they do not possess the necessary capacity to prevent crimes in their territory.

“But should national authorities manifestly fail to protect their populations from genocide, war crimes, ethnic cleansing and crimes against humanity, then we must be prepared to take collective action, in accordance with the Charter, including Chapter VII, on a case-by-case basis,” he stated.