A New Shock Doctrine: In a World of Crisis, Morality Can Still Win

Jeremy Corbyn, Bernie Sanders and Podemos in Spain have shown that a bold and decent strategy can be a successful one. That truth should embolden the left.

28 Sep 2017 – We live in frightening times. From heads of state tweeting threats of nuclear annihilation, to whole regions rocked by climate chaos, to thousands of migrants drowning off the coasts of Europe, to openly racist parties gaining ground: it feels like there are a lot of reasons to be pessimistic about our collective future.

To take one example, the Caribbean and southern United States are in the midst of an unprecedented hurricane season, pounded by storm after storm. Puerto Rico – hit by Irma, then Maria – is entirely without power and could be for months, its water and communication systems severely compromised. But just as during Hurricane Katrina, the cavalry is missing in action. Donald Trump is too busy trying to get black athletes fired for daring to shine a spotlight on racist violence. A real federal aid package for Puerto Rico has not yet been announced. And the vultures are circling: the business press reports that the only way for Puerto Rico to get the lights back on is to sell off its electricity utility.

This is a phenomenon I’ve called the Shock Doctrine: the exploitation of wrenching crises to smuggle through policies that devour the public sphere and further enrich a small elite. We’ve seen this dismal cycle repeat again and again: after the 2008 financial crash, and now in the UK with the Tories planning to exploit Brexit to push through disastrous pro-corporate trade deals without debate.

Ours is an age when it is impossible to pry one crisis apart from all the others. They have all merged, reinforcing and deepening each other like one shambling, multi-headed beast. The current US president can be thought of in much the same way. ,It’s tough to adequately sum him up. You know that horrible thing currently clogging up the London sewers, the fatberg? Trump is the political equivalent of that. A merger of all that is noxious in the culture, economy and body politic, all kind of glommed together in a self-adhesive mass. And we’re finding it very hard to dislodge.

But moments of crisis do not have to go the Shock Doctrine route: they do not need to become opportunities for the obscenely wealthy to grab still more. They can be moments when we find our best selves.

We all witnessed this in the aftermath of the catastrophic fire at Grenfell Tower. When the people responsible were missing in action, the community came together, held one another in their care, organised donations and advocated for the living – and for the dead. And they are doing it still, more than 100 days after the fire – with, scandalously, only a handful of survivors rehoused.

It’s not only at the grassroots level: there is a long and proud history of crises sparking progressive transformation on a societal scale. Think of the victories won by working people for social housing in the wake of the first world war, or for the NHS after the horrors of the second world war. This should remind us that moments of great crisis and peril do not need to knock us backwards: they can also catapult us forward.

But these transformative victories are never won by simply resisting, or saying no to the latest outrage. To win in a moment of true crisis, we also need a bold and forward-looking yes: a plan for how to rebuild and respond to the underlying causes. And that plan needs to be convincing, credible and, most of all, captivating. We have to help a weary and wary public to imagine itself into that better world.

In recent months the Labour party has showed us there’s another way. One that speaks the language of decency and fairness, that names the true forces most responsible for this mess, no matter how powerful. And one that is unafraid of some of the ideas we were told were gone for good, such as wealth redistribution, and nationalising essential public services. Thanks to Labour’s boldness, we now know that this isn’t just a moral strategy. It’s a winning strategy. It fires up the base, and it activates constituencies that long ago stopped voting altogether.

The last election also showed us something else: that political parties don’t need to fear the creativity and independence of social movements – and social movements have a huge amount to gain from engaging with electoral politics. That’s a very big deal, because political parties tend to be a bit freakish about control, and real grassroots movements cherish their independence. But the relationship between Labour and Momentum shows it is possible to combine the best of both worlds and create a force both stronger and more nimble than anything that parties or movements can pull off on their own.

What happened here in Britain is part of a global phenomenon. We saw it in Bernie Sanders’ historic campaign in the US primaries, powered by millennials who know that safe centrist politics offers them no kind of safe future. We see something similar with Spain’s still young Podemos party, which built in the power of mass movements from day one. These electoral campaigns caught fire with stunning speed. And they got close to taking power – closer than any other genuinely transformative political programme has in Europe or North America in my lifetime. But not close enough. So in this time between elections, we need to think about how to make absolutely sure that, next time, all of our movements go all the way. 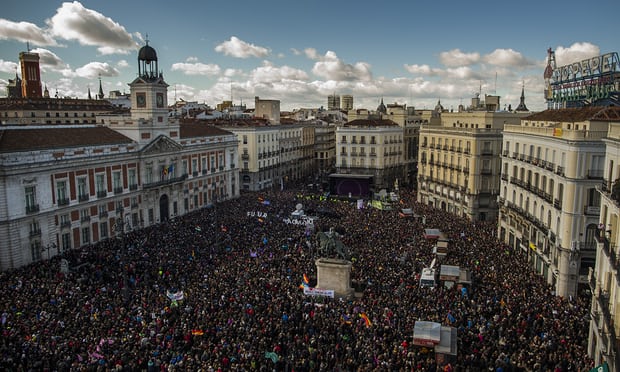 Podemos supporters in the centre of Madrid, in 2015. Photograph: Andres Kudacki/AP

In all of our countries, we can and must do more to connect the dots between economic injustice, racial injustice and gender injustice. We need to draw out the connections between the gig economy – which treats human beings like a raw resource from which to extract wealth and then discard – and the dig economy, in which extractive companies treat the Earth in precisely the same careless way.

And let’s show exactly how we can move from that gig and dig economy to a society based on principles of care – caring for the planet and for one another. A society where the work of our caregivers, and of our land and water protectors, is respected and valued. A world where no one and nowhere is thrown away – whether in firetrap housing estates, or on hurricane-ravaged islands.

Battling climate change is a once-in-a-century chance to build a fairer and more democratic economy. We can and must design a system in which the polluters pay a very large share of the cost of transitioning away from fossil fuels. And in wealthy countries such as Britain and the US, we need migration policies and levels of international financing that reflect what we owe to the global south, given our historic role in destabilising the economies and ecologies of poorer nations for a great many years, and the vast wealth of empire extracted from these societies in bonded human flesh.

The more ambitious, consistent and holistic that the Labour party can be in painting a picture of the world transformed, the more credible a Labour government will become.

Around the world, winning is a moral imperative for the left. The stakes are too high, and time is too short, to settle for anything less. 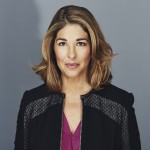